These essays were inspired by Kate/Kade’s Butch Please article, Butch Gets Dressed.

“Style is a simple way of saying complicated things.” This quote, which has been attributed to French artist Jean Cocteau, really reflects much of what we are trying to convey through our work at dapperQ, a fashion and empowerment website for the unconventionally masculine. dapperQ, similar to other queer blogs today and that have come before, has been criticized because some feel that having a fashion focus is “consumerist” and/or “superficial.” But, as Cocteau’s quote so brilliantly points out, our clothing is symbolic, a mode of non-verbal communication that helps us convey complex things to others about who we are as individuals, about our cultures, about our societies; in a way, clothing/fashion/style is a language. (Yes, these three concepts are different, but we are speaking more generally here.) We hope to move beyond talking simply about brands and trends to opening up a dialogue about how and what we communicate non-verbally via our clothes. Or, as Elisa Glick points out, “…gay style is not seen as an abandonment of politics, but rather the site of political engagement.” 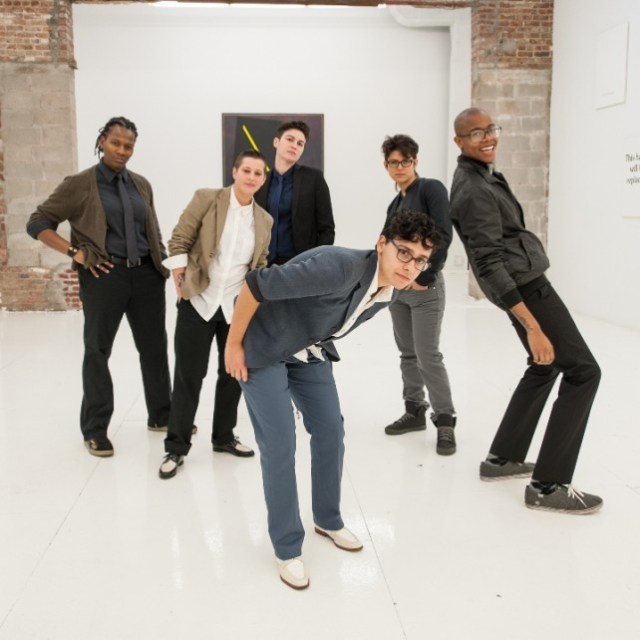 Photo by Katya Moorman via dapperQ

According to the New York Times, the growing scientific field of “embodied cognition” has revealed that “we think not just with our brains but with our bodies….and our thought processes are based on physical experiences that set off associated abstract concepts. Now it appears that those experiences include the clothes we wear.” So, fashion/style/clothing as a language (or part of a larger language), not only communicates many things to external observers, but also impacts how we perceive ourselves.

dapperQ recognizes that clothing/fashion/style, like a spoken or non-verbal language, is not created in a vacuum. It impacts and is impacted by cultures, societies, and a world full of love, hope, creativity, regional nature, and wildly beautiful human diversity and simultaneously full of hate, misogyny, racism, classism, homophobia, transphobia, fat-phobia, and many other isms/phobias. Thus, the motivation behind why one individual decides to dress the way they dress is not black or white.

There are many reasons why a particular individual dresses the way they dress. Yes, one reason may be to emulate the dominant culture in an effort to gain acceptance or fit normative expectations. But that may not always be one of many reasons that an individual chooses a particular style of dress/clothing. Other reasons may include using style as a form of protest; claiming or reclaiming a specific style of dress; adopting a style of dress to express individual personality; choosing clothing that fits well or is functional; using clothing to expand the definitions of race, class, ethnicity, gender, and sexuality; etc. Whatever the reasons, the clothing always carries a message, be it intended or unintended. 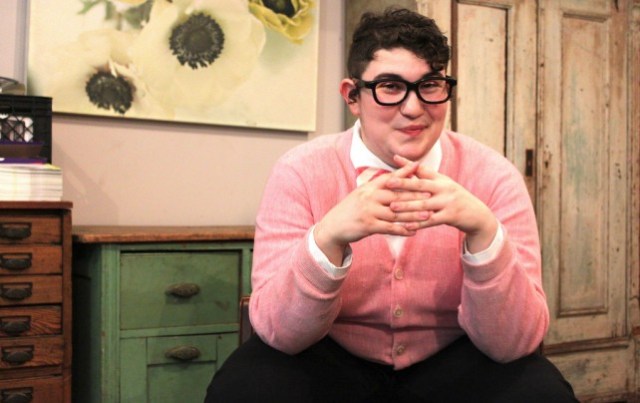 Photo by Yi-Ching Lin via dapperQ

The goal of our website has always been to provide much needed visibility, resources, and role-models for masculine gender-queers, or anyone else who has been told by society that menswear and masculinity is “off limits” to them. We emphasize that there is no right way of being dapper. Our readers have a broad range of style icons that inspire them: Rachel Maddow, David Bowie, Kanye West, James Dean, Murray Hill, Ellen DeGeneres, Justin Bieber, Pharrell, Mick Jagger, Frank Sinatra, Rocco Katasrophe, A$AP Rocky, and, yes, even the consummate dandy dapper Janelle Monae, to name a few.

In a recent Butch Please post on Autostraddle, Kate provided a personal critique of the dandy dapper queer aesthetic, stating:

“If butchness and butch desirability has its own power structure, dapper butch is at the top, which makes sense in a twisted and sad way when you think that rich educated white men, the thing that dapper butch is meant to emulate (either ironically or not – in so many cases I think a critical commentary is no longer in play or being utilized) are at the top of the macro version of that power structure.

Like so many other parts of queer masculinity, dapper feels good. It feels good to dress dapper because I know I will be immediately accepted by queers and non-queers alike. I know I will be considered attractive, I will be able to navigate queer spaces with complete ease, and my masculinity will not be questioned.”

It is true that in some corners of the U.S., the dapper/dandy aesthetic is the queer style du jour. And, while Kate’s personal experience deserves to be respected as valid and true to Kate, it does not represent all of the experiences and perspectives of those who dress dandy dapper queer.

Many of our readers have actually been shunned, rather than “immediately accepted,” for dressing dapper – not just for dressing masculine, but specifically for dressing dapper. Some of our contributors and readers of color have been harassed and have had their race, ethnicity, and/or masculinity called into question by members of their community, both straight and queer, for dressing “too bougie,” claims that only perpetuate normative stereotypes that there is only one right way of dressing if you’re a POC. One reader recalled visiting home for holiday and being laughed at by her AG friends because her perfectly tailored button-down shirt was “too tight” in their opinion; they immediately took her to the mall to purchase some sagging jeans and an oversized t-shirt. This reader went along with it because she didn’t want to be considered a “sell out.” Another reader shared a story about how her partner had asked her to dress less dapper when going to meet her partner’s friends for the first time because dressing too dapper might impact their “street cred.” 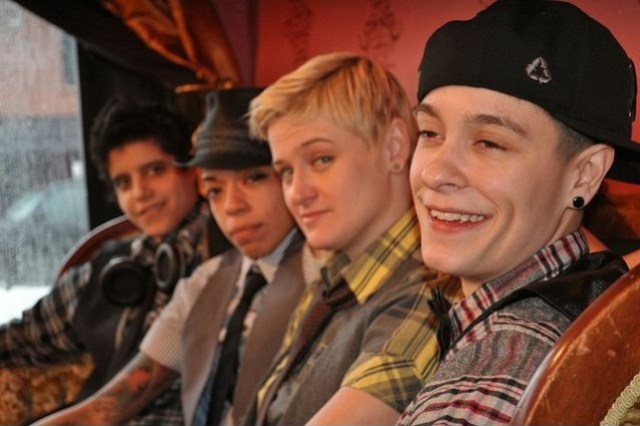 Photo by Susan Herr via dapperQ

These experiences are not isolated to QPOC by any means. We have had countless conversations with both QPOC and white-identified dapperQs who purposely “dress down” or change their dapper styles to fit the hipster aesthetic that is so popular and at the top of the power structure in queer communities in larger cities like New York. A reader sent us an e-mail asking where she could find skinny jeans that fit her curves, not because she liked wearing skinny jeans, but because she felt pressure to dress more hipster when she went out to queer bars, even though she preferred the way that a pair of relaxed khakis fit her body and the way that a bow-tie, rather than a sleeve of tattoos, reflected her nerd-cool personality.

Conversely, many of our readers have been empowered by dressing dapper, not because they found acceptance by emulating the dominant culture, but for some of these and other previously listed reasons about why individuals might dress the way they dress: because it is a form of in-your-face protest; because there is now increased access to a form of performance art that had been previously denied to them; because they may find a blazer and slacks to be more flattering on their shape than a tank and skinny jeans; because they have professional jobs that call for business attire and will no longer tolerate wearing a skirt to work; because it defies racial stereotypes; because they enjoy thrifting for one-of-a-kind vintage pieces; because they identify more with the academic dapper afro + suit + tie look of Cornel West than the homogenous faces in Tiger Beat; and so on and so forth. 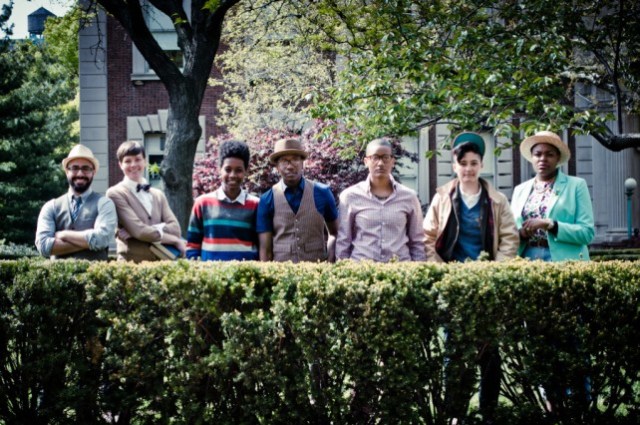 Photo by Bex Wade via dapperQ

Dandy has gone through various incarnations from its origins in 18th century Britain to modern day interpretations, as documented in RISD’s Artist/Rebel/Dandy exhibition featuring the stylings of a diverse range of icons including W.E.B. Du Bois, John Waters and Patti Smith. Each manifestation brings new voices, new perspectives, new interpretations. For example, in her book Slaves to Fashion, Barnard Collage Associate Professor Monica L. Miller documents the unique history of black dandyism. andré m. carrington’s review of Miller’s book notes, “the black dandy also furnishes indispensable varieties of female masculinity with which to style the revolution… DuBois suggests, as a black dandy patriarch, that black and darker peoples might freely choose to love and enjoy modes of dress and self-presentation that feminize men and masculinize women, much to the consternation of critics who would strip his peculiar wedding of aesthetics and politics of its decisively racial accoutrements.” 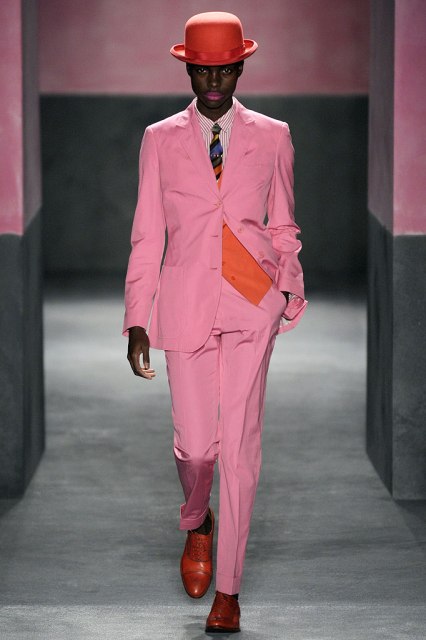 Queers too have played and continue to play an important role in these new manifestations, expanding the definitions of dapper, pushing its boundaries, and contributing to its ever-changing history. Elisa Glick’s Materializing Queer Desire notes, “The queer black dandy’s rebellion against the culture of capitalism gives birth to a new aesthetic that combines the naturalized simplicity and vigor of primitivism with the artifice of decadence – making legible a distinctly African American incarnation of the new forms of desire, identity, and community emerging in modern, urban culture.” Furthermore, Glick acknowledges that lesbian artists, such as Renee Vivian, Romaine Brooks, Natalie Barney, and Radclyffe Hall “drew upon the traditions of dandyism and decadent aesthetics ‘as part of a desire to make a newly emerging lesbian identity publically visible’” and explains that the lesbian dandy has been “conceptualized in opposition to the sterility and uniformity of mass culture, even as she is portrayed as the quintessentially modern, new woman.” 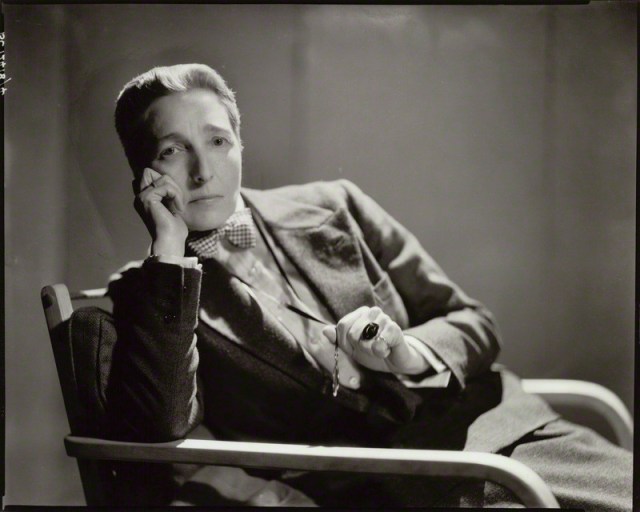 The Economist author N.L. said of the various interpretations of punk style, “But the point, always, is to flout convention. It is a way to tell the world what you think of it without ever saying a single word.” This can be true of rebel style in general, and for many, dressing dapper queer is rebelling, rather than conforming. 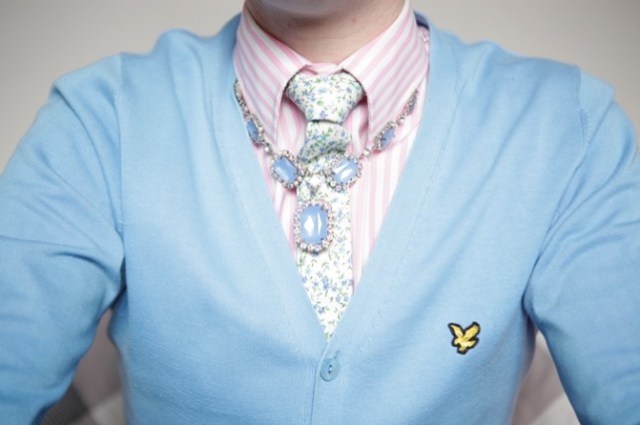 Image courtesy of our friends at The Test Shot, a project documenting transmasculine style

So, what does it mean for a queer to rock a bow-tie? It depends. A bow-tie can take on a variety of meanings and can be perceived as negative or positive, empowering or oppressive, depending on the culture or subculture. The embodied cognition study published in the New York Times also found that “If you wear a white coat that you believe belongs to a doctor, your ability to pay attention increases sharply. But if you wear the same white coat believing it belongs to a painter, you will show no such improvement.” Same coat, different meaning… 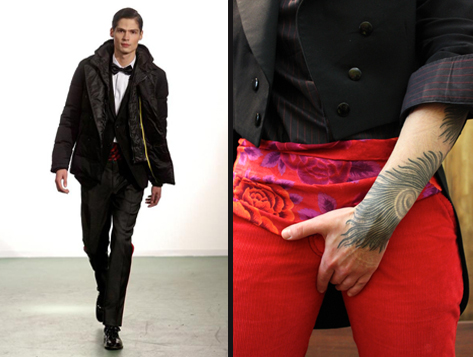 Next: Dapper Became Me