The Fosters opens with a shot of a prison and that’s how we know it’s going to be a lesbian show! Okay – it’s not really a prison but a juvenile detention center but as the show takes us inside to girls in jumpsuits it pretty much has the same feel. Then, there is mention of a confrontation in the showers and then punching and kicking happens. The punchee and kickee is Callie who is obviously one of the main characters because the camera focuses on her. 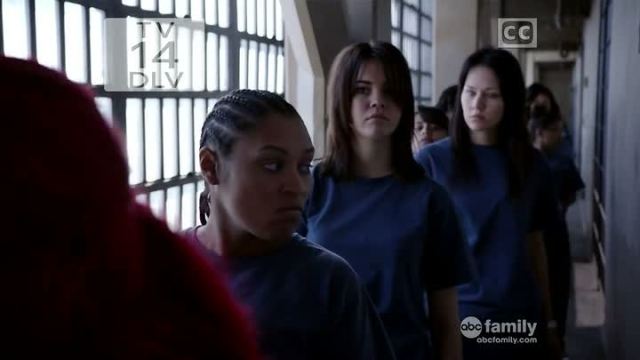 Where’s Peggy Peabody when you need her?

We then take a sharp thematic turn and visit a piano competition, where some teenager in a suit and sneakers plays piano while a blond cop watches from the audience. I might add that the piano thing is very poorly attended which while establishing two main characters also makes a deep and biting commentary on the state of the arts in this country. Not really – it’s just an audition. The cop’s phone rings and we know it’s Lena because the iPhone product placement tells us so but the cop doesn’t answer it because she has good cell phone manners and is a lover of the arts.

We travel back to the Prison for Wayward Girls where some guy named Bill tells Lena about Callie, “She’s been having a few issues with male authority figures of late.” and Lena says, “And that’s why you thought of us.” Because they are just two ladies, get it? Bill explains that Callie ended up in juvey after a property damage situation with her last foster family and Lena is all, “Ooooo…my wife will not be happy if I bring home a violent kid” and Bill is like, “She’s not really violent even though she just appeared before us with a split lip and a face full of bruises!” Lena and Callie make meaningful eye contact and Callie tears up and gives puppy eyes and no lesbo can resist puppy eyes so we know that Lena is bringing Callie home.

In the next scene, we meet the rest of the kids as they all bustle about getting ready for dinner. First we meet, Mariana and Jesus who have been with Lena and Stephanie for eight years.

Digression 1: I would like to talk about their kitchen for a moment. It is very tidy and I envy that but the more exciting reveal is that we have the same drinking glasses! Lesbian Moms love William-Sonoma Bistro Glasses! 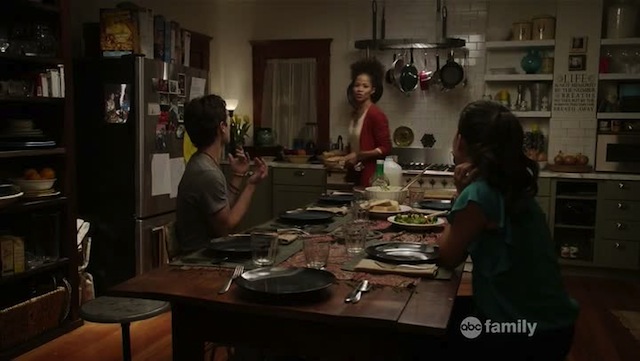 How to Set a Big Lesbeaux Dinner Table

Anyway, Callie goes to the bathroom and Lena tells Mariana and Jesus that she is working on a meeting with their birth mom. She is very excited about this and they are not. We then enter the bathroom where Callie is crying into the mirror and there are lots of artsy shots of the water pouring into the sink. Usually, when you have that many shots of water in a white sink, there’s going to be blood but thankfully this is not a horror movie and the water shots are pointless.

Callie goes back into the kitchen and the Piano Man enters. Not Billy Joel – the one from earlier with the suit and sneakers (though Billy Joel may have worn that as well). Callie says, “How’d ya get him? 99 cent store? They have everything there.” And with that little statement, I decide I want Callie to come live with me in my untidy kitchen and drink from my bistro glasses. The Piano Man is actually named Brandon. Then Stephanie the Cop Mom comes in looking very coppy with her uniform and swagger and she says “Hi babies” and I melt a little bit because I say that to my kids all the time. Then, she and Lena kiss like real lesbian moms do —  briefly, because you always have an audience. Callie then says, “So you’re dykes.” Somehow she manages to say it without sounding completely judgmental so I’ll still allow her to use my bistro glasses. 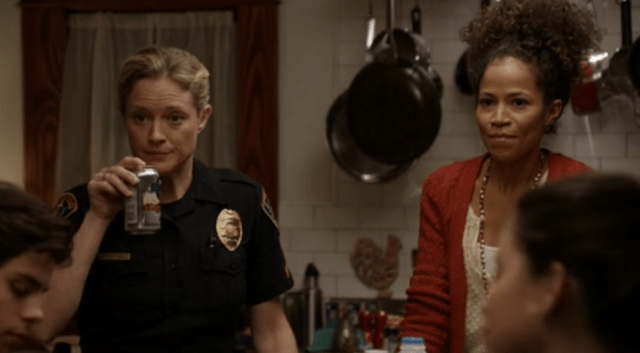 we prefer the term “badass bitches,” but whatever

Then, she makes a comment about Brandon being the “real son” and that goes over less well than the dykes thing so no more bistro glasses and lesbian lasagna for you Callie!

Digression 2: Steph looks haggard and I like that because I look like that most of the time. People with children look haggard! Realism!

Lena explains to Steph who Callie is and then they go outside to have some quality lesbian processing time about Lena bringing home a kid. Eventually, Steph tells Lena she understands she has a big heart and Lena says, “Oh mushy. I’ll have to bring kids home more often.” And then I want Lena to come live with me too. Then, Steph says they are not the Brady Bunch but, when she says that, you know that’s exactly what we are supposed to think – “modern day Brady Bunch!”  just hope there isn’t a Jan because she was always the most irritating of the Brady children with Cindy running a close second.

Steph the Cop Mom lays down the rules for Callie who interrupts her and, not surprisingly, Steph is not a big fan. Callie then leaves to have a heart to heart with Lena but then Steph the Cop Mom shows up in a new outfit that lets us know she is just Steph the Mom now and she interrupts the sharing of feelings before it even gets started.

Digression 3: Steph is wearing a worn out t-shirt and a pair of plaid pajama pants which is very similar to what I wore to drop off my kids at school this morning. #lesbianmomuniform 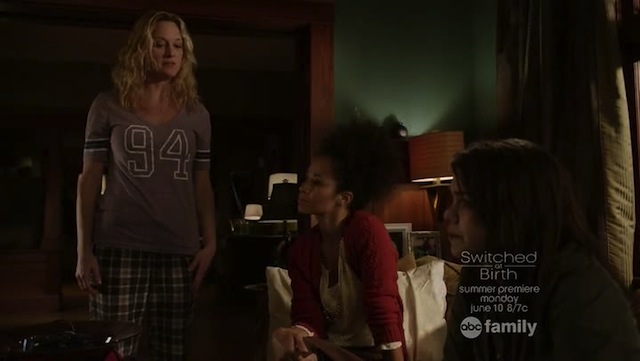 Steph then goes on a Tour of Children. First stop? Mariana and Jesus. They are chatting on Mariana’s bed and Steph joins them and is much softer and sweeter and gives them hugs and kisses because she’s wearing her magical lesbian mom pajama pants. Then she says that they are their real kids too and adds “I love you my babies” and I teared up a bit because it’s sweet and I’m really tired because one of my babies didn’t sleep last night and I was not as patient and kind as Steph even though I was wearing the magical pajama pants. 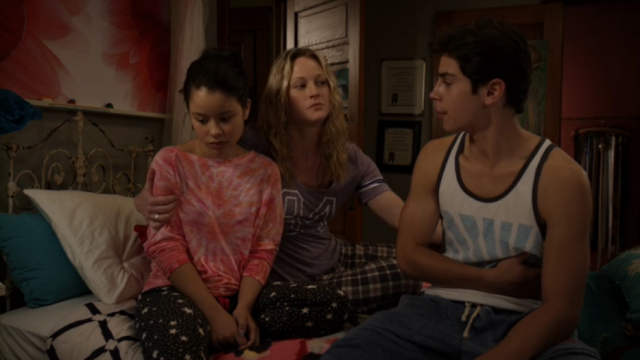 the good news is, i still look really hot in my cop outfit

Then, we briefly see Callie in a white claw foot tub and she is bruised and sad and she touches a turtle sticker on the wall and looks pensive and it all starts to feel like it could go very After School Special soon.

Steph continues her Tour of Children with a stop to see Piano Man. She asks him to be nice to Callie and says, “I just need you to, I don’t know…” and he says, “Ok, I’ll be sure to I don’t know as much as I can.” And now I want Brandon to live with me too! Then, he talks about homework and says, “Moby Dick waits for no man.” Steph responds, “Which reminds me – do you need condoms?” And I laughed which means that Steph can come live with me too.

Meanwhile, in the kitchen of darkness, Mariana takes down a Burberry box basket thing and removes some Methylphenidate (generic Ritalin) and that’s when you know that there are going to be lessons learned!

Digression 4: It is a little known fact that lesbian mothers keep all medications in a Burberry box basket filled with beige napkins. Ritalin must be hidden from the children…who take it.

Callie catches Mariana taking the pills because she is skulking about the house. She then goes to Piano Man’s room and steals his phone while he is reading Moby Dick and then makes a call in some other darkened part of the house and says, “Hey baby. It’s me.” and then says something about having to figure out how to get there. Callie is very busy. I suspect she is nocturnal.

Fast forward to school the next morning. Apparently, Lena is Vice Principal of Anchor Beach which is supposedly a school but looks like a yacht club with lots of pretty people, a view of the ocean and people walking around with surfboards. We did not have these things at my school. Of course, I lived in Kansas but still. 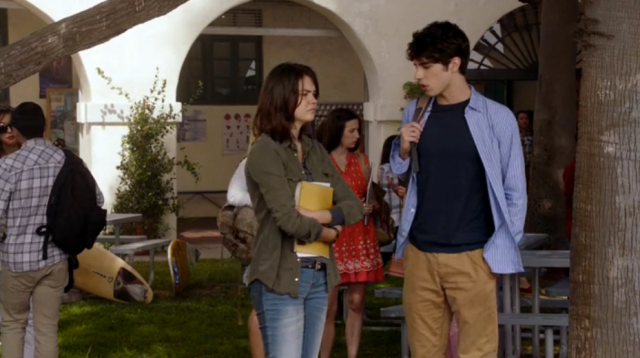 To avoid being stared at by girls in pastels, Callie and her army jacket go with the Piano Man to listen to him practice. He then plays her an original piece about his family and it should be really touching because the music is good and it’s a nice sentiment (It’s about his family and how the music is just better with all of them together) but mostly it feels contrived.

There are a bunch of little scenes that follow but they feel choppy and boring and I am going to ignore them even though Missy Higgins’ “Secret” is playing while Callie is trying to get some kid she just met to drive her to Mexico or close to Mexico. See? Boring.

Meanwhile, Mariana is secretly chatting with her birth mom online.

Digression 5: While Mariana chats online we find out that the family’s last name really is Foster which is so disappointing. Fosters Fostering. I had hoped that wouldn’t be the case. But alas, Jennifer Lopez didn’t ask my opinion when producing this show. We just don’t talk like we used to. 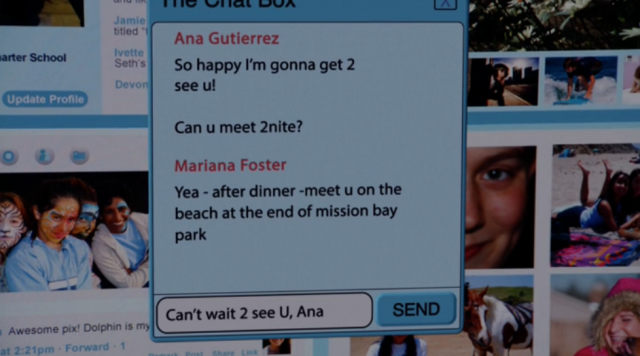 Instead of doing some book learnin’, Callie confronts Mariana about the pills and Mariana tells her where the bus stop is. Jesus finds a huge wad of cash in Mariana’s purse and she says that she got it working as a Cater Waiter in New York and he says that she got it selling drugs and he sings Cold Hearted Snake. Essentially.

Then, we end up in a police station and the Captain wants to see Steph the Cop Mom and it seems her partner is transferring and the Captain says, “You’re not gonna cry are you?” and Steph says, “No. With all due respect, screw you.” What a lovable tough guy she is! Then there is some partner drama of the non-lez variety because some guy, Mike, wants to be her partner and Steph’s not happy and we start figuring out that Mike is her ex and they made the Piano Man. 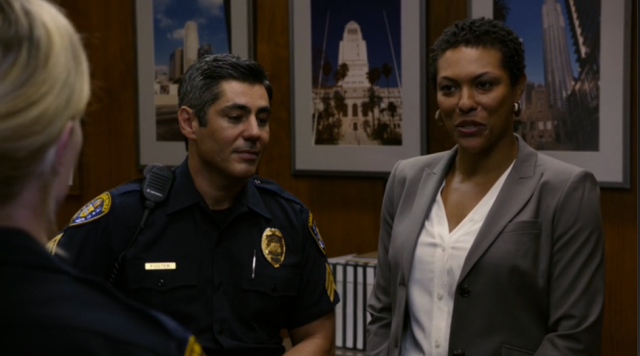