Back at Anchor Beach School for Pretty Surfers, Callie is ditching to go to Mexico and the Piano Man sees her and follows her. There is some dramatic beach walking accompanied by equally dramatic music and Callie finally tells Piano Man that her brother, Jude, is still in her previous foster home and she ended up in juvey for taking a baseball bat to the foster dad’s Trans Am.

Digression 6: I didn’t know they still made those! Maybe it was a classic car. I will say that the Trans Am was my favorite Hot Wheels car growing up. Mine was destroyed in an unfortunate firecracker incident. A baseball bat would have been overkill.

So, the Piano Man gets on the bus with Callie and they go to Mexico. 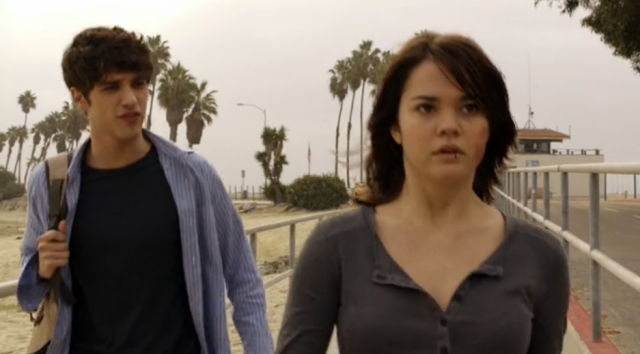 alternately, we could just go to Yogurtland

While they are on the bus heading towards trouble in Tijuana, we head back to the house where Mariana says she is sick and can’t go to Piano Man’s final competition that night. Lena asks Jesus (the brother, not the Lord – she is not praying) what’s up with Mariana and he makes reference to “that time of the month” and Lena tells him never to say that again in a house full of women. I might have smiled at that. What can I say? I’m easy.

Then, Steph the Cop Mom comes home and eats string cheese in the kitchen and tells Lena that she has been partnered with Mike and Lena obviously doesn’t like it but we don’t get much lesbian processing because the doorbell rings and there is Mike all dressed up in a suit, ready to go to Piano Man’s recital. Yes, Mike is the dad and his presence proves that lady lovin’ ladies keep all their exes around.

Digression 7: Why did Mike change into a suit but Steph the Cop Mom remains in her uniform for the concert (that doesn’t happen because of Mexico) and for the rest of the episode. This distracted me. It was like when Brittany and Santana went to the amusement park on skip day in their cheerleading uniforms. 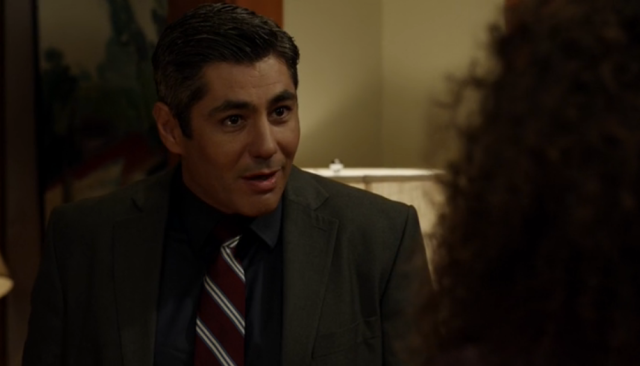 i don’t know if you’ve heard, but national law requires one man per every two lesbians on a television show so i’m just here to fill that “void”

Mike and Lena stand awkwardly in the foyer and Lena brings up the fact that Mike asked to be Steph the Cop Mom’s partner and he says that he didn’t want her with a rookie and he’s protective of her. Lena says, “As a feminist, I’m totally offended and everything but, as her wife, thanks.” I am a sucker for TV characters who talk explicitly about being feminists so – bistro glasses for Lena!

They suddenly realize that Brandon is missing! And the show starts to turn a little Law and Order: Special Victims Unit. Fortunately, Steph the Cop Mom has an app to track her kids (Note to self: get children phones and then get that app) and her iPhone shows us that his blinking red dot is heading to Tijuana! They figure out that he is with Callie and they suspect that they are in trouble, not simply seeking out authentic Mexican cuisine.

They all pile in the car and drive to Mexico. Parental road trip!

Meanwhile, Mariana is heading out to meet with her birth mother to give her the wad of money she had asked for. As Mariana waits on a park bench on the beach, her iPhone tells us Jesus is calling (her brother, not the Lord). She ignores Jesus’ call. I laugh because I’ve ignored that call for years. 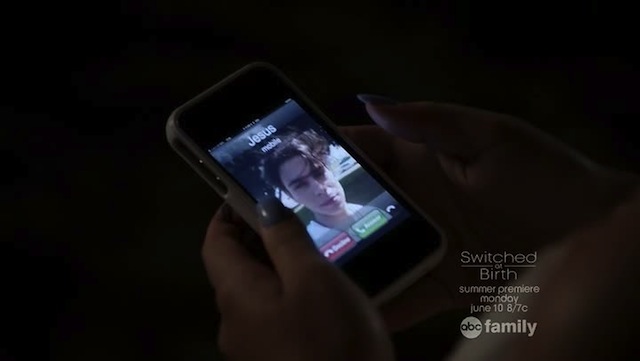 If you ignore Jesus’ call, you’ll end up living with lesbians.

Mariana’s birth mother arrives and just wants the money but we don’t have time to sit with Mariana’s complicated emotions about this realization because we have to go to Mexico where Callie has snuck in the back door of her former foster family’s house to take her little brother. 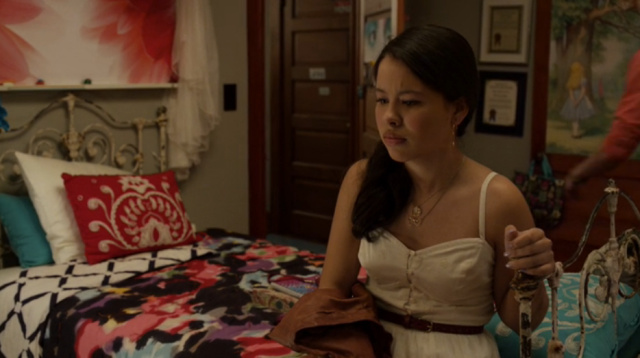 Piano Man knocks on the front door as a distraction but these things never go well. There is a lot of shouting, grabbing, crying, hitting and then the foster dad pulls a very shiny silver gun out of a drawer and is pointing it everywhere. Fortunately, this is television and Olivia Benson Steph the Mom Cop arrives on the scene with her merry band of travelers and she can see the gun from the street. She and Mike the Cop Dad pull their guns and go into the house and put an end to these shenanigans and cuff the foster dad.

Digression 8: Can off-duty cops carry their guns, enter a private residence in Tijuana and cuff some guy? Also, were they really in Mexico? So many questions but, ultimately, who cares?

As they are all getting in the car to go home, we see that Jude has a turtle on his backpack and the turtle touching in the claw foot tub makes more sense. However, the artsy water shots of the sink are never explained. Sometimes, we must live without understanding the complexities of such things.

They drive away without any tacos while Brandi Carlile sings “Before It Breaks” which is a fitting end to this episode of The Lesbian Moms After School Special Victims Unit. 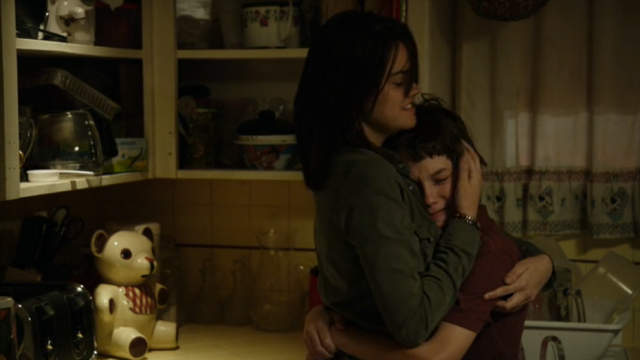 Overall impression: Better than I expected.

Favorite lines: Brandon says, “Moby Dick waits for no man.” Steph responds, “Which reminds me – do you need condoms?” Steph ends the conversation with, “To protect and to serve. It’s my job.”

Really? Did they have to do that?: Fosters Fostering.
Until next time…bistro glasses for everyone!