+ USA Today finds that the court briefs filed regarding the upcoming SCOTUS ruling both “wacky and profound.” Amicus briefs — the instance in which someone files a “friend of the court” brief, essentially just a letter telling the court why you think they should decide a certain way — sometimes seem pretty wacky in and of themselves, you know?

Through the first week in April, 77 had been tendered in favor of the petitioners, while 49 oppose same-sex marriage, including a group of pastors who predict it will bring “God’s judgment on the nation.”

+ Tristan Broussard is suing First Tower Loan LLC for firing him, apparently due to his trans status and his refusal to wear women’s clothes at work. Represented by several firms, Broussard’s case claims that he was discriminated against under Title VII of the Civil Rights Act of 1964.

This Police and/or Military State

+ After the reveal of a horrifying domestic “black site” in Chicago, to which prisoners would be secretly spirited without access to an attorney or anyone from the outside world knowing where they were, Chicago has been a real flashpoint for our discourse about police violence. The city of Chicago is now required to pay $5.5 million in reparations to victims of police torture in the 70s and 80s. They will also provide “psychological counseling, job placement aid and other services” thanks to a separate ordinance, meant to address a period of time under the purview of former police commander Jon Burge, who was fired from the department in 1993, but this shouldn’t give us the false impression that torture and other unlawful treatment of arrested and incarcerated persons is unique to Burge or his administration.

Chicago and Cook County have already paid about $100 million in settlements and verdicts for lawsuits related to Burge, who was fired from the police department in 1993 and later convicted of lying about the use of police torture in testimony he gave in civil lawsuits. Burge and detectives under his command were accused of forcing confessions from black suspects by using electric shocks delivered with a homemade device, suffocation with plastic covers and mock executions.

+ Freddie Gray, a 27-year-old Baltimore man arrested by police officers and who received serious injuries, is in the hospital in critical condition. It’s not clear what occurred leading up to Gray’s arrest; Baltimore Police Deputy Commissioner Jerry Rodriguez has only said that Gray “fled.” He is in an induced coma with spinal injuries; the officers involved have been put on administrative leave. The incident that led to Gray’s injuries has apparently “at least partly” been captured on video.

+ This week four former employees of American security firm Blackwater Worldwide were sentenced for the deaths of 14 unarmed Iraqis in 2007, with sentences ranging from 30 years to life. One other guard involved in the deaths who testified for the prosecution and plead guilty has not yet been charged.

+ In the latest dispatch from the international war on drugs, the Drug Enforcement Agency is in hot water after revelations that “the agency’s history [of] sexual misconduct… was more extensive and egregious than previously reported.”

+ We talked a week ago about Kansas’ law effectively banning second-trimester abortion; now Oklahoma has joined that terrible, terrible party! Jezebel says “The bill, HB 1721 in the House and SB 95 in the Senate, is virtually identical to Kansas’s law, in that the final version doesn’t use medical terminology, only a deliberately shocking description of the procedure.”

+ Columbia University’s anti-rape activist group, No Red Tape, created a protest art installation that projected phrases like “rape happens here” and “Columbia protects rapists” on the campus library around the same time that prospective students were visiting campus. Some accounts say that school administrators showed up to try to stop the projections and berate student activists; some accounts say those first accounts aren’t true. 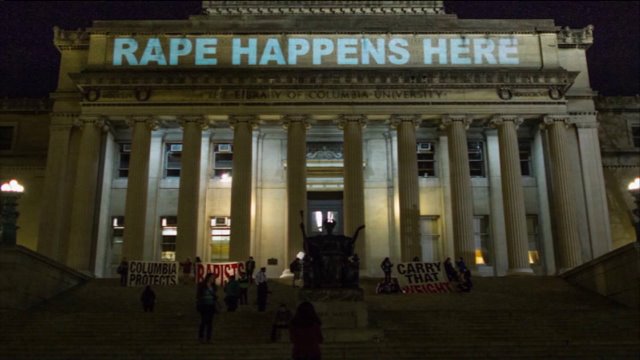 + In Nevada, a bill designed to restrict the use of the correct bathrooms by trans students has passed its first assembly vote.

If it became law, AB 375 would define a student’s “sex” as “the biological condition of being male or female as determined at birth based on physical differences or, if necessary, at the chromosal level.” The law would then require that this definition determine which sex-segregated facilities a student could use, or else provide trans students a unisex bathroom or separate stall. AB 375 also proposes limits to Nevada’s sex education programs, restricting the ages of students who can take the courses, who can teach the curriculum, and forbidding “explicit depictions of sexual activity.”

The Assembly Judiciary Committee has passed the bill thanks to the backing of Republicans; the vote now moves on to the full assembly.

+ Did you pay attention to Equal Pay Day? It occurred this April 14th, and is supposed to be a marker of how far into the new year a woman (“a woman,” which of course flattens the distinction between the different pay gaps that different women experience, with women of color and trans women making even less than cis white women) must work to make as much as a man made the previous year (again, “a man,” an obfuscating category, etc). Anyways, this Equal Pay Day, Republicans introduced a new version of the Paycheck Fairness Act, a bill which is remarkable in its seeming lack of any actual legislative measures that would ensure the fairness of paychecks.

The Republican measure is a tepid endorsement of the “concern” women may have about being discriminated against by their bosses. It also contains language stating that pay disparities are acceptable if they are about “merit” or “any factor other than sex,” which, as evidenced by the slippery and subtle sexism on display in the Ellen Pao case, can be a difficult thing to argue against. (The Paycheck Fairness Act makes exceptions for pay differences based on “education, training or experience.”)

+ Attorney General Elizabeth Barrett-Anderson has ordered Guam to begin allowing same-sex marriages. The marriages aren’t rolling quite yet, as it seems like many marriage officials don’t want to perform them, but it’s a step.

+ Revisiting hot topic state Indiana, this week lawmakers attempted to introduce statewide LGBT protections in a variety of forms, and were shut down. Womp womp.

+ A few weeks ago we mentioned that world-famous incarcerated person Mumia Abu-Jamal was hospitalized with serious diabetes complications. Third-grade teacher Marylin Zuniga had her class, which is entirely Black and/or Latino and a number of whom have incarcerated relatives, write him get-well letters. Now she’s facing termination from her job. The school system is attempting to distance itself from Zuniga; some local activists don’t want to let them.

Nyle Fort, a local activist who described himself as a close friend of Zuniga’s, said the idea to write the letters actually came from a group of students in her class who were already aware of Abu-Jamal and recent news that he had been hospitalized due to complications from diabetes… “I think it’s really important to realize that black and brown schools have fundamentally different relationships to prison and the people inside of them than in white neighborhoods,” he said.

“The idea that a young person that’s in third grade should not be talking to an inmate fundamentally does not work in our neighborhoods.” …Fort drew a different parallel, citing the favorable academic treatment of explorer Christopher Columbus, which he said spoke to the “racial dynamics at play” in the issue concerning Zuniga.

“The idea that it’s not controversial to teach children about Christopher Columbus, who is an architect of genocide, who is a serial rapist, who is a founder of white supremacy, but they can’t write letters to Mumia, is unbelievably hypocritical,” he said.

+ Some thoughts about California’s approach to public education and how it’s dealing with educational requirements that are having negative outcomes elsewhere, like standardized testing and Common Core. Is this all true and California is the one happy medium between state budget needs and the needs of students? Probably it’s a bit more complicated than that, especially when we consider that student rallies were being organized across the UC school system at least as recently as November, but this contains interesting interview info with the former State Superintendent of Public Instruction anyway.

News Grab Bag, Read All About It

+ A shooting at a North Carolina community college is being investigated as a hate crime, although police have declined to explain “what specific biases were being considered in the hate crime investigation.” 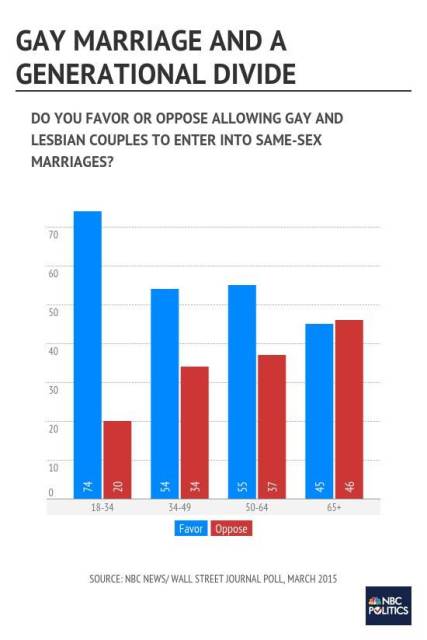 + This week, Hillary Rodham Clinton ate at Chipotle. Because she wants to prove she’s just like us, or because burrito bowls are delicious and affordable? Regardless, Marco Rubio claims to love EDM and Nicki Minaj. Unfortunately his favorite band, Axwell ^ Ingrosso, does not want him to use their music in his campaign. Wonder how he’s feeling about Nicki’s engagement.

+ China had previously jailed five feminist activists for allegedly “provoking trouble;” now, all of them have been freed.

+ The Atlantic has the story on how conversion therapy has largely fallen out of favor even with Christian communities, tracking from conversion therapy’s grim heyday to Alan Chambers’ public repudiation of it and Obama’s recent statement against it. In a notable exception to the Atlantic’s claim, the UK group Core Issues Trust is claiming that the NHS’s moves to ban conversion therapy are in fact discriminatory against gay people who don’t want to be gay.