Hello! Welcome to the pop culture fix! Do any of you watch The Lizzie Borden Chronicles? Asking for a friend. I just need somebody to talk to. Maybe I’ll write a thing. 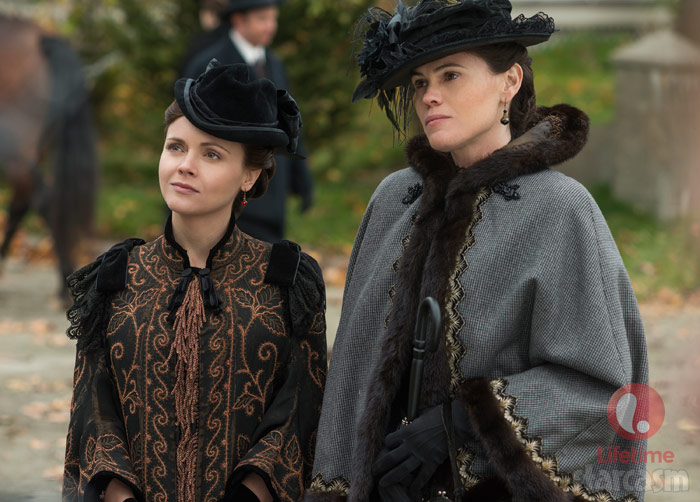 So THAT’S how lesbians have sex. Huh. 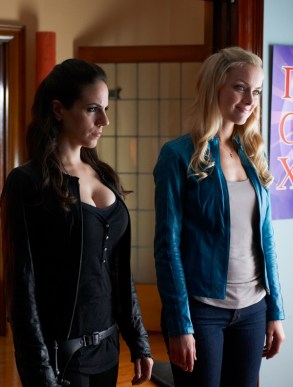 + Lost Girl: Dorothy Snarker talked to Anna Silk of Lost Girl about the final season of her show, like about Lauren and Tasmin and all this other stuff I didn’t read because I’m two seasons behind and don’t want spoilers. But I thought you’d really like what she had to say about Bo’s bisexuality:

The other aspect of the show I know a lot of AfterEllen readers have been drawn to is the fact that you have a lead character who is bisexual and yet no one ever says “bisexual” on our show. That’s just who she is. There was no sort of, well, now we reveal she is bisexual. It was just like that from Day One. I am proud of that fact. Zoie and I spoke in the beginning about creating that relationship. The writers created a relationship that is so real. Even though the circumstances are unreal and crazy in terms of the world they are in, the relationship was really real. And I’m really proud of that part of the show as well.

+ Ellen: HLN is launching a new game show based on a segment from Ellen. The 65-episode half-hour program, Heads Up!, will be hosted by comedienne Loni Love. I think maybe I should just have an “Empire of Ellen Corner” in every Daily Fix.

+ ABC Family: ABC Family is sexy and wants you to know it! In anticipation of upfronts, the network unveiled its plans to “focus on a group of viewers it calls “becomers” who interested in romance, even sex, and on their way to becoming big-spending consumers ready to sign up for credit cards and financial investments.” Why are they interested in this pursuit? Well, “executives hope to scrap a long-held notion that its original shows are aimed at parents and younger children watching together.” I feel like this could be handled handily by just having Emily Fields have sex with girls more often, but apparently it’s being handled by debuting some new shows. For example, a bunch of derivative reality shows and also one potentially cool reality show about “a teenager learning to live with his dad becoming a woman.” Also: a new project from I. Marlene King called “Famous in Love”! Also: a show about a teenager in rehab based on Recovery Road by Blake Nelson, who is definitely on the list of Top Ten Men I Don’t Hate. Personally, the show I’m most excited about is the very sexy “We Heart Disney,” “a music spectacular featuring some of today’s biggest pop stars singing classic Disney songs.” Seriously. I’m excited about it.

+ Sesame Street: Sesame Street is getting a remodel for Season 46. Season FORTY-SIX! It seems like just yesterday that I was eating a piece of paper and smashing Spaghetti-Os into my face during Season 16. “Changes to the iconic neighborhood’s set include a new nest for Big Bird and a new community center,” reports Variety. The intention of these changes is to “offer young viewers a better sense of the Muppets’ homes.” It’s about time!

+ Faustina Agolley, an Australian TV personality who co-hosts The Voice Australia and co-hosted Video Hits for five years, came out on her blog, declaring “As black as my skin, as Chinese as my blood, and as Australian and British are my nationalities, I’m also a proud Gay Woman.” Yay! 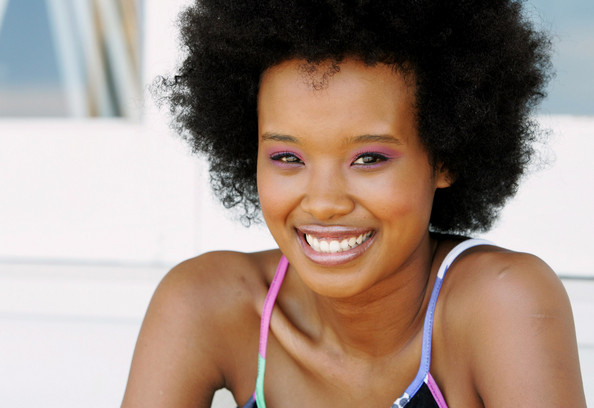 + Well, Michelle Rodriguez talked to El Pais about bisexuality and other things, we think. The article is in Spanish but Yvonne, who I asked to translate the article for me because Google Translate is the worst and eight years of Spanish seemingly left a minimal impression on my language skills, suspects the interview was not conducted in Spanish:

i have a feeling that someone translated her english words into spanish because there’s some quotes in here that i have no idea. and i asked gloria who speaks better spanish than me and she’s even confused by some of them especially this quote, we’re just like whatt? “Yo he evitado el sexo como quien evita un disparo porque los papeles de hispana siempre eran los de mujer de mala vida, la tentación, la ramera. Pero eso se ha acabado. Me he ganado la libertad sexual”, comenta a carcajadas.”

This is the translation: “I have avoided sex like someone avoids a gunshot because acting roles for a Hispanic women always were about women living bad lives, temptation, and slut. But that is over. I have gained sexual liberty,” she comments cracking up.

This is what she says about her bisexuality: “Es algo natural, orgánico. Quiero probar cosas nuevas y sentirme libre.” “It’s something natural, organic. I want to try new things and feel free.”

Then Audrey noticed this section was particularly awesome:

So there you go. (Stef confirms that bisexuality is organic, get the 365 brand at Whole Foods.)

+ Jeffery Tambor, a cis man who plays a trans woman on a television show called Transparent, was asked to lend his extreme expertise to the issue of Bruce Jenner coming out as a trans woman. Tambor’s statement, “I think Jenner has a right to do what Jenner wants to do and the way Jenner wants to do it,” actually qualified as an entire article on Salon.com! Also, the rest of Tambor’s commentary included, “We live in a 24[-hour] media cycle, and people love to raise fear and like to raise prejudice. There are really, really drastic things happening right now in the environment, in international relations. Let’s get a perspective on this.”

+ You’ll be so relieved to hear that we’ve reached the Kristen Stewart tipping point/ It’s all in today’s Hot Take from Salon.com: “In the past few weeks, a number of mainstream publications, including our own, have written in praise of Stewart: In particular, how the meta-narrative of her tumultuous fame plays into her role in the film, and how she’s successfully capitalized on her brittle offscreen persona and turned it into a likable one. All of a sudden, the critical community has figured out what “Twi-Hards” have been saying for years: Kristen Stewart rocks!”

WELP THIS IS PERFECT:

Issa Rae, Shonda Rhymes, Ava DuVernay, Debbie Allen and Mara Brock Akil are on the May 2015 cover of Essence Magazine. 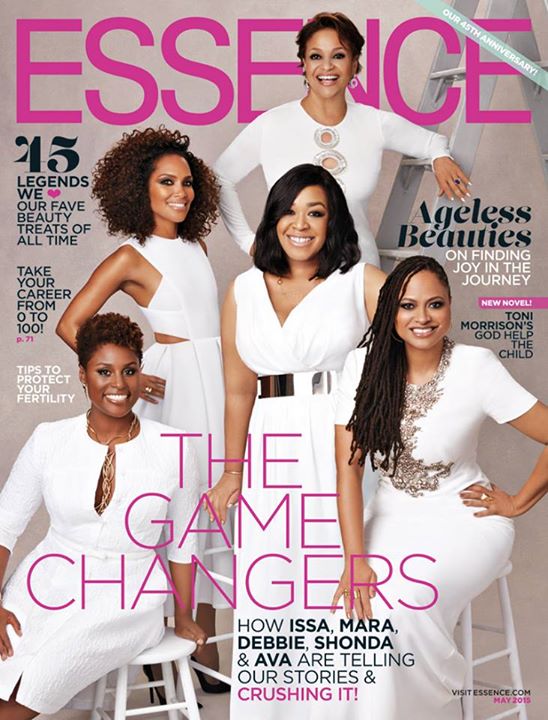 Your second-favorite blonde lesbian Liz Feldman has another episode of her fantastic web television program, “This Just Out.” This time’s special guests are Orange is The New Black writer and Samira Wiley girlfriend Lauren Morelli and my favorite band Uh Huh Her, who also do the opening theme for This Just Out. This episode is important on so many levels. Here’s some of them: Lauren Morelli donated a campership to this year’s A-Camp so that another lady who discovered her love for other ladies later in life could enjoy the A-Camp experience, one time I went all the way to SXSW just to see Uh Huh Her. Neither of those topics are discussed in this episode of This Just Out. You’ll have to watch it yourself to figure that out.

Do you live in or near Los Angeles? Good news: you’re in a perfect position to attend The Latino/a Queer Arts & Film Festival! It starts tomorrow, April 16th, and goes ’til the 19th at the Los Angeles LGBT Center in The Ed Gould Village:

A highlight of the Festival will be our closing night film, the Los Angeles premiere of VESTIDO DE NOVIA, April 19, 2015, 4:00 p.m. VESTIDO won Best Picture at the Festival Internacional del Nuevo Cine Latinoamericano in La Habana, Cuba in December 2014. Inspired by her documentary En el Cuerpo Equivocado about the experiences of the first transgender person in Cuba, director Marilyn Solaya reflects on Cuba during the economic collapse in the 1990s and the true story of a woman who is not free to disclose her sex reassignment surgery even to her husband.

+ Heather discovered that Tatiana Maslany Is Every Emoji on “Orphan Black”.

+ Boob(s On Your) Tube covered serious ground and quoted me talking about Salem.

+ Laneia and I finally finished that post we started last year about 8 Winona Ryder Movies That Tug On Our Nostalgic Heartstrings.

+ You curled up around your burning loins to read 7 Clarke/Lexa Stories To Force You Into The 100 for Fan Fiction Friday.

+ Hologram Selena is Coming to Town!

+ Have you seen Orange Is the New Black’s Season 3 Trailer? Have you?