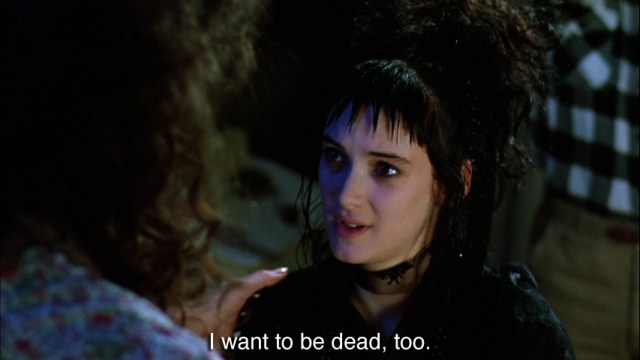 Laneia: Beetlejuice was a seriously scary movie and it freaked me out COMPLETELY, but there was Lydia, and she wasn’t scared of anything. Her parents let her wear weird shit and be in a bad mood, which was really appealing as a nine or ten year old. I think this is what happens when you’re an only child — you make up your own big sisters as needed. I must have really needed someone who was sullen and dark, because Beetlejuice kicked off my imaginary kinship with Winona Ryder. 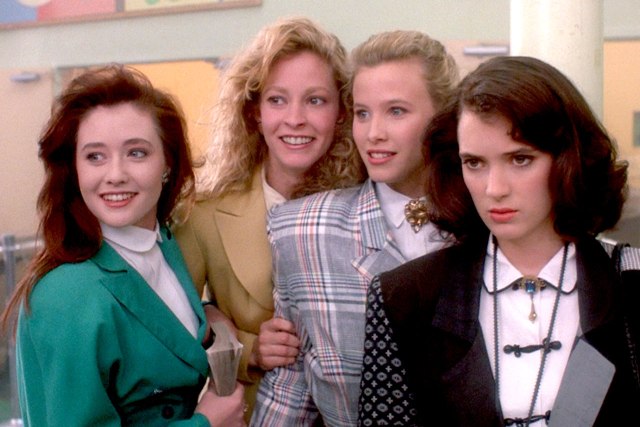 Riese: These teenage girls are angular peacocks, they are not afraid to take up space. They wear bright blazers with boxy shoulders and bold broaches, hair that crests above the forehead or comes together around a scrunchie in a knot of yellow curls. The Heathers are mean and they teach Veronica to be mean, too, but Veronica really only wanted to be cool, but then she finds out that being cool = being mean. Then a darkly smiling sociopath asks her for a game of croquet but means “sex in the grass.” The only way Veronica can be free of that bitch Heather is to out-bitch Heather, like with violence and murder.

“I’ve always held the original script of Heathers among the great literature that I’ve ever read,” said Winona Ryder about Heathers. “For me, it’s like, Ezra Pound, Philip Roth, Saul Bellow, and Daniel Waters, you know?” Winona’s agents didn’t want her to take the role but Winona got down on her knees and begged. It’s her favorite movie, she almost has it memorized.

Producer Denise Di Novi said, “Winona was so smart. She was fifteen, she turned sixteen on the movie. She was a prodigy. From a very young age, she was an old soul. She really got the words and the imagery. She had watched tons of old movies. She was really sophisticated intellectually. She had the beauty of Veronica. She had the intelligence. She was just the perfect anti-Heather.” 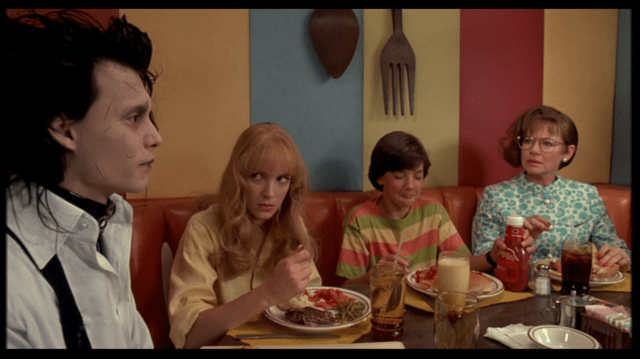 Obviously this film had a lot of lesbian subtext because Johnny Depp, who was basically a lesbian for most of the ’90s, had hands made out of scissors. This is a combination of two lesbian situations: scissoring and fingerbanging. Also, Winona Ryder. 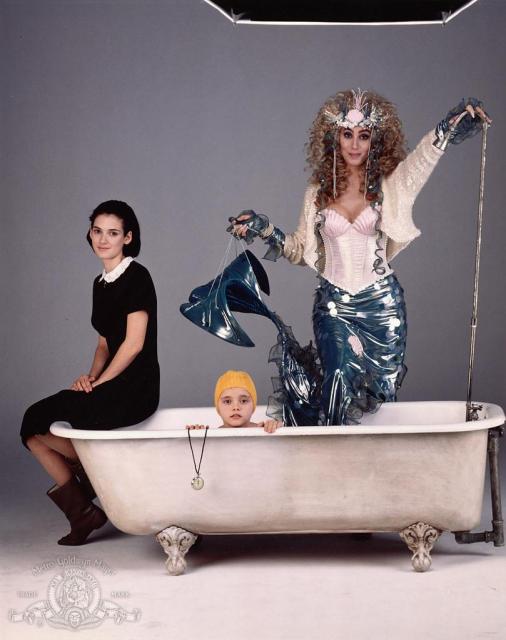 Laneia: Charlotte wanted to have sex and I related to this a lot. She needed intimacy but she was terrified of it, and she was clumsy and weird. All of these things were my things, too, even though I didn’t know it then. I was mostly just obsessed with her face and her boots, and Mrs. Flax’s dedication to finger foods as meals. This was another movie when Winona was my big sister and I didn’t realize it. 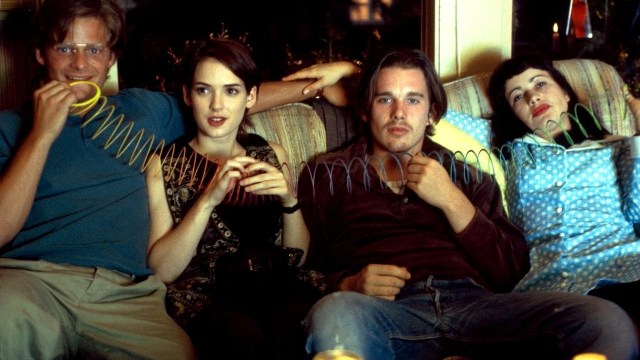 Riese: I saw this movie in 1994 and I pretended like I liked it but I didn’t really understand it, not until much later. Look at this girl! She’s smart and pretty and ambitious but being a grown-up is hard, right? Yes, you feel this. You relate to this. I saw this again in my twenties and knew like a psychic on the telephone that this was my jam.

This is one of many mid-90s films (and Broadway musicals) that are preoccupied by what it means to “sell out” as an artist, which seems like such an indulgent concern these days. Like that you’d even have the option, really, I think at this point we’re just looking to be sold, period, or bought, whatever.

Again Winona Ryder walks the line between charming and insufferable, but if you can relate to Lelaina you probably won’t notice the selfish parts.  Troy seemed really sexy back then but now I just want to push him off the roof.

Laneia: Reality Bites became the framework for my understanding of the world and my aspirations. This time I knew that Lelaina was the big sister I desperately needed, and I decided upon first viewing that her life was everything I wanted. I wanted cute dresses and potential I could squander, a super weird friend who slept around, at least one very affected and greasy boy person to makeout with, a short haircut, and the space in which to indulge in a complete and total emotional breakdown. I wanted to know the lyrics to old songs and sing them loudly in strange places, I wanted a boxy German car I could take for granted, I wanted a video camera. I memorized the lines like I’d be quizzed on them later. I braided my bangs down the front of my forehead and waited patiently to understand what the fuck everyone in this movie was so upset about.

Winona just manages to make every horrible selfish thing seem like the most appealing bay window to sit in for days. I think she does it in every film! 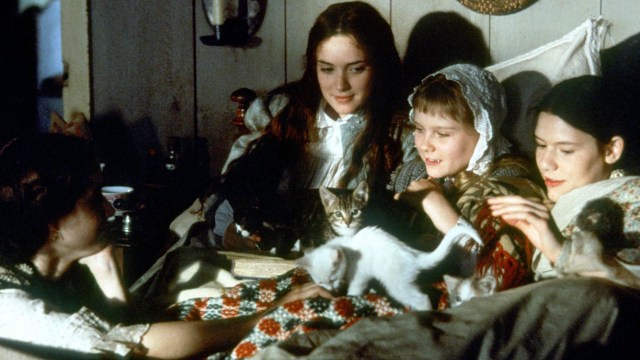 Riese: Jo March and Winona Ryder already occupied the same bit of my brain, so when she was cast as Jo I thought to myself, of course. She’s the charming, ruddy tomboy, the captain of the ship, intellectual and affectionate, even with hair to her waist (until she sells it, of course) and skirts to the floor. She’s too busy for boys (until she isn’t, but we’re used to that, I guess) and too ambitious for the kind of womanhood practiced in homes less progressive than her own. Yes, the world is full of darkness and war, poverty and illness and death, but there is also Christmas, and music, there are piles of sisters and kittens, there are costumes and flowers and big old houses with hearths. I loved her dearly at this time, and I loved Claire Danes dearly too, and Kristen Dunst, to a degree, and even Samantha Mathis, and definitely Christian Bale. I loved The Alcott House, where I took writing classes with instructors wearing period costumes pretending to be the March sisters. In this movie Winona Ryder played me, had I been born way back then instead of just now.

Laneia: Little Women was one of the last movies I watched with my mom before launching into full-fledged horribly selfish teenager mode, and we cried and CRIED and cried some more. Having Claire Danes in this one was like a miracle! This whole cast was amazing, actually. Marmee is home INDEED. 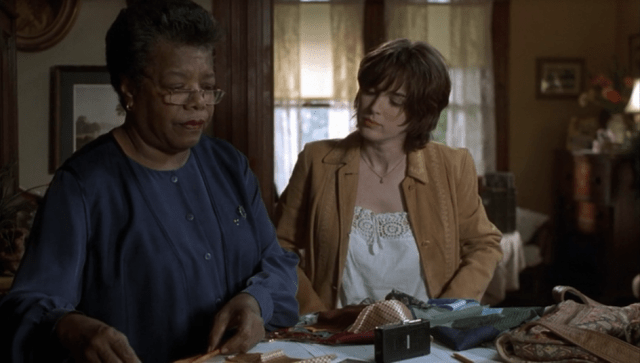 Laneia: How to Make an American Quilt was DELICIOUS and entirely underrated. This is a Winona Ryder feelings post, so in the interest of staying on topic I’ll say that I thought Finn Dodd was annoying and wretched and I hated her. I was 100% more interested in the backstory of the older women — Samantha Mathis and Claire Danes were the real reasons I was there — and then Maya Angelou, Anne Bancroft, Alfre Woodard?! I just wanted to hang out with these old ladies and talk about their lives forever.

Riese: I barely remember this movie besides that it was sold out at Showcase Cinemas so we had to buy tickets to something else and sneak in and sit on the floor and we missed the beginning. I just couldn’t believe how lucky we all were that Winona Ryder and Claire Danes were in the same movie AGAIN. 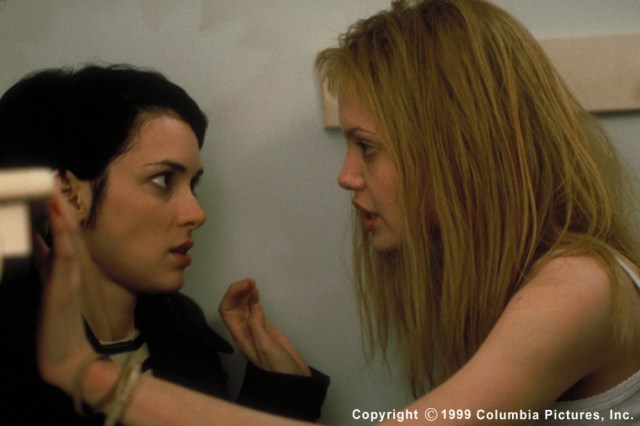 Riese: Susana is a stubborn and unhappy adolescent girl born at the wrong time in the wrong place to the wrong people. When I first saw it I thought, “I wonder if I would’ve been sent away back then,” you know? But I was young and foolish, probably, even though this movie is kind of about how being young and foolish and female can look like insanity to everybody else. When I remember this movie I remember Angelina Jolie at the ice cream shop, firstly. Then I remember Susana’s journal being read aloud in the dark tunnels below the institution, I remember her silent in a car not knowing where she’s going, or lighting a cigarette in somebody’s office with all the windows closed. She’s just so aggressively herself, full of questions, sick of everybody imposing their values on her body and she’s been fucked over by so many alleged grown-ups that it takes time to realize some of them want to help her.

She’s small, sure, physically, but she can do big things (“you chased a bottle of asprin with a bottle of vodka”) or she can splash in the tub, she can yell and challenge labels and feminine norms or she can unleash a torrent of ugly bigotry, she can blow smoke everywhere and make big gestures in oversized shirts. This is a movie about a girl yanked out of the world of men — men who in their maleness can’t penetrate her facade — and placed into a world of girls — girls who split her open because they could see her. So she learned empathy, or something like it. Right?

Laneia: I’d already read Girl, Interrupted (pretty sure it was an Oprah pick) because doing so seemed to fall in line perfectly with my Lelaina-like ambitions, so I was super excited when Winona was cast as Susanne. Even though it’s widely held that Angelina upstaged her in this film, I still think she did the role justice. Now I can’t think about Girl, Interrupted without getting depressed about Brittany Murphy, so.

Riese: I read the book after I saw the movie, and sometimes I wonder what Lisa would’ve looked like if she wasn’t already Angelina Jolie in my mind. And by that I mean if she wasn’t already my dark dangerous girlfriend who knew how to break rules and told it like it was. I mean, she was bad news. But I was 18.