Happy Wednesday, snozzberries! This is your weekly Pop Culture Fix, the place where we talk about the queer/feminist things that are happening in the world of entertainment that don’t require a 5,000-word think piece!

I am so proud to be a part of this film #Grandma written and directed by #PaulWeitz starring the incomparable and legendary #LilyTomlin and the moving @juliagarner94 with the awesome @nattwolff and the smoldering @kuwaiti_cutie. #TFF

Lily Tomlin‘s Grandma (which also stars Laverne Cox, remember) has garnered so much good buzz at the Tribeca Film Festival that people are already whispering about an Oscar nomination for Tomlin. Flavowire says that in addition to substantial, “juicy” writing for Cox:

[Writer/director Paul Weitz] writes a leading role for Tomlin that’s worthy of her considerable talents. She’s a hellraiser, fiercely protective and tough as nails, yet never reduced to merely that (and she doesn’t always win her battles, sometimes to great comic effect). Her dialogue is sharp and quotable without feeling “written” (as it might coming out of the mouth of a lesser actor), because Tomlin so effortlessly projects bristling intelligence. It’s a wonderfully, wickedly funny performance.

The New York Times thinks Tomlin is pretty perfect too:

Lily Tomlin, giving a career-capping performance, plays Elle Reid, a renowned poet and outspoken misanthrope who is broke and still recovering from the death of a longtime female partner. When her 18-year-old granddaughter shows up needing $600 for an abortion scheduled that very afternoon, they seek the money from Elle’s past friends and lovers. Elle’s raw, pungent remarks are brightened by Ms. Tomlin’s twinkle, but her character’s bitter, tell-it-like-it-is attitude represents a quaint countercultural sensibility curdled by disappointment and age

Tomlin stopped by HuffPo yesterday to talk about a whole lot of things, including being a lesbian in Hollywood in the ’70s.

+ Variety just released their Power of Women issue, so they’re unloading loads of content about about lady things. For example, this three-year study that confirms how shitty it is to be a female director. It features quotes like: “Nearly half of the industryites surveyed believe that female-directed films appeal to a smaller audience than pics directed by men.” And: “Across 1,300 top-grossing films from 2002 to 2014, only 4.1 percent of all directors were female.” And why? Female directors’ “lack of ambition,” of course. And how they “‘can’t handle’ certain types of films or aspects of production, such as commanding a large crew.”

+ Patricia Arquette‘s speech at the Golden Globes drove Meryl Streep over the edge, I think. She has had it with ageism and sexism in Hollywood! This week she announced she’s melting down her Oscars and selling them off and using the money to fund a screenwriting lab for women over 40. (She’s not really melting down her Oscars; she’s using Paypal like regular America to fund the workshop.)

Emma Stone sure is going to play Billie Jean King in Fox Searchlight’s Battle of the Sexes. Fox will be fighting the clock against HBO because it has a similar film in the works, starring Elizabeth Banks in the lead role. Two competing BJK biopics? WHAT A TIME TO BE ALIVE. Both films will apparently land in 2016.

It’s the time of year where networks are rolling out renewals and bringing down the hammer with cancellations. Here’s a run-down of what we know about the queer shows you watch.

+ Faking It has been renewed for a third season.

+ Everyone’s been wavering on One Big Happy, but TV By The Numbers now says it’s likely to be cancelled.

+ Netflix ordered a fourth season of Orange is the New Black. 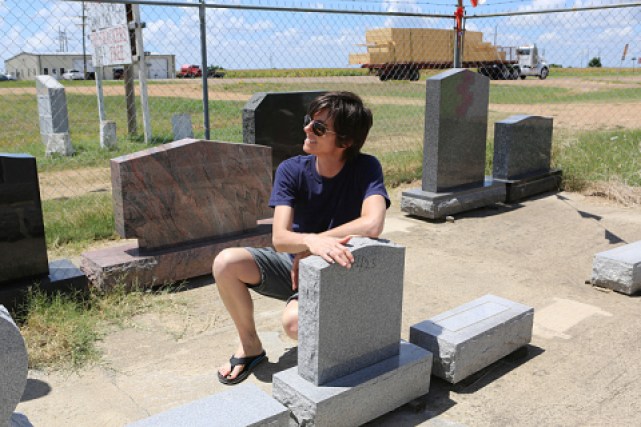 Tig Notaro’s cross-country road trip documentary, Knock Knock, It’s Tig Notaro, premiered on Showtime late last week, and the reviews have all been pretty great. Flavorwire says: “What you will find, however, is part stand-up, part buddy comedy, and part road trip documentary — and an oddly cathartic one, at that.” Wired thinks it’s amazing (and dark). The A.V. Club agrees. The New York Times is really the only major detractor. They think Tig’s “meta-Americana” can be “awkward and slightly condescending.”

Avengers: Age of Ultron is almost here, and so is Ellen’s supporting role.

After getting the short end of the costume stick in a failed Wonder Woman TV pilot, Adrianne Palicki is finally getting her own superhero show. She’ll continue her role as Mockingbird in a new Agents of S.H.I.E.L.D. spin-off. The Captain Marvel movie has hired two female writers to bring Carol Danvers to the big screen. Director Michelle MacLaren left the much (and forever) anticipated Wonder Woman movie, but rumored Thor 2 director Patty Jenkins has decided to take up the mantle of the world’s most famous female crime fighter.

Ta-Nehisi Coates gave a fascinating interview to Vulture about the role of superhero comics in changing the world.

But comics companies have started to explicitly say, “We are being more diverse and inclusive,” which is much less coded than a lot of the efforts at diversity in the past.
Marvel opened the doors, right? You have Storm, there’s a black Iron Man in the ’80s, the second X-Men generation — you have the Native American Thunderbird. You have heroes that look all sorts of ways. When I was a kid, I knew that superheroes were not exclusively white and male. And if you have fans who grow up with that, they reach a certain age and they expect you to go to another level. Beyond that, it costs comic books way less than movies to do diverse things. They ain’t got to worry about casting somebody who is going to bring in box office.

Yesterday, the Michigan Womyn’s Music Festival announced that this year’s 40th anniversary festival will be its last. From the official Facebook announcement:

We have known in our hearts for some years that the life cycle of the Festival was coming to a time of closure. Too often in our culture, change is met only with fear, the true cycle of life is denied to avoid the grief of loss. But change is the ultimate truth of life. Sisters – I ask you to remember that our 40 year Festival has outlived nearly all of her kin. She has served us well. I want us all to have the opportunity to experience the incredible full life cycle of our beloved Festival, consciously, with time to celebrate and yes, time to grieve.

There have been struggles; there is no doubt about that. This is part of our truth, but it is not–and never has been–our defining story. The Festival has been the crucible for nearly every critical cultural and political issue the lesbian feminist community has grappled with for four decades. Those struggles have been a beautiful part of our collective strength; they have never been a weakness.

For more about the festival’s decline, check out Riese’s longform piece from last summer, Michfest Could Change Its Trans-Exclusionary Policy Only If It Tried, Only If It Wanted To.

+ Fun Home: The Musical opened this weekend to fantastic crowds and reviews. The New York Times lost its damn mind over it. I haven’t seen a review this good in their theater section since Neil Patrick Harris opened Hedwig and the Angry Inch. To wit:

“Fun Home” knows where you live. Granted, it’s unlikely that many details of your childhood exactly resemble those of the narrator of this extraordinary musical, which pumps oxygenating fresh air into the cultural recycling center that is Broadway.

But this production has only improved, not least because of its having to be reimagined for a theater-in-the-round space. (The Public production was on a proscenium stage.) The audience becomes, more than ever, part of the Bechdel family circle. For better or worse — and for me shows this cathartic are only for the better — we’re home.

Netflix has officially ordered 13 episodes of Fuller House. Next up, Saved By the Bell: Shady Pines.

And anyway, this is how you cuddle with a pony. (Thanks, Cute Overload!)