Hey, do you remember that book that changed your life, that book called Fun Home

? You know, the Alison Bechdel comic book memoir about coming out and her relationship with her dad that launched a thousand queer book club discussions? Well GUESS WHAT, the musical adaptation of Fun Home will open at Broadway’s 700-ish-seat Circle in the Square Theater on April 22! The date is significant because it’s IMMEDIATELY before the normal Tony Awards cut-off date, so you know they’re gunning for Best Musical next year. But you guys. BROADWAY. The big time! The biggest stage a musical can aspire to play on, so to speak! This is an enormous deal!

Transferring from Off-Broadway to Broadway is notoriously difficult, particularly for shows that aren’t well-known properties, since it costs millions of dollars to mount each production and since it can be difficult to draw in large audiences. What that generally translates to, when you’re a queer woman who is a feminist and a fan of musical theater, is a lot of sighing and accepting the fact that you’ll almost never see yourself reflected onstage unless your sexuality is a punchline, Rent notwithstanding. (This applies to professional and amateur productions [and generally to queer women but not queer men, and to queer women of color waaaaaay more than white queer women], but that’s a much larger conversation for another day.) I mean, seriously, it’s rare enough to get a show that’s not based on a movie or music anthology to Broadway at all, let alone a show written by women, let alone a show about a masculine-of-center queer woman! What a time to be alive. This could be the start of something new, do you hear the people sing, let the sunshine in, etc. 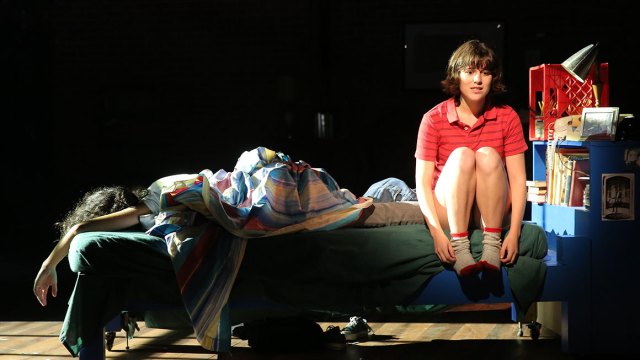 College Alison sings about her first time having sex with a woman, photo by Joan Marcus

Casting for the Broadway production will be announced at some point in the (hopefully near) future. In the meantime, I strongly recommend listening to the Off-Broadway cast recording

, featuring performances from Beth Malone, Michael Cerveris and Judy “Pocahontas” Kuhn, among others. Also, you should watch this clip from the Drama Desk Awards of Sydney Lucas as Young Alison singing “Ring of Keys,” which is about her first encounter with a butch woman. You guys, I can’t even believe there is a song about that. This is so crazy, I can’t believe this show is transferring to Broadway, somebody hold me.