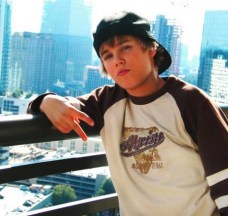 Hello this is Tinkerbell. This weekend I posted an article on Autostraddle.com regarding the impending apocalypse, as foretold by a newspaper article entitled “The Rise of the Biebians.”

For the beginning I would say that “the apocalypse” is hyperbole, just like the title “The Rise of the Biebians,” which gave me flashbacks to a) the bible, 2) With God on Our Side: George W. Bush and the Rise of the Religious Right in America, Rise of the Gargoyles, Hitler: The Rise of Evil, Mongol: The Rise of Genghis Khan and Terminator 3: Rise of the Machines.

Because I am a dog with limited wordspan and also because Strunk & White says “eliminate needless words,” my post was short. It was a direct response to the way an article had characterized a generation of teenaged lesbians. But I forgot that this is the internet, where people read headlines and then angrytypetype at their computers before considering that maybe I love you.

Hello teenaged lesbians of the world. If you are here, I already love you and believe in you. As just a stuffed dog I find myself in awe of your style and movement, as well as your words and tumblrs.

That is why I am sad to read statements published in mainstream media which reflect apathy at the exclusion of all other feelings, such as:

“…maybe this phenomenon could be indicative of a more apoliticized generation of lesbians who aren’t looking for a dose of politics with their music. ‘After being so hyper-obsessed with political figures like Ani Difranco, maybe the queer community just wants to enjoy themselves with someone like Justin Bieber who doesn’t stand for anything,’ Lichtman says.”

I do not think that is how you think, lesbians of the world. I think you have nice hair AND care about things. It is our duty as human beings and stuffed animals in the media to challenge apathy, even if we ourselves are not always Ani DiFranco. For many eons people have taken gay words out of context and made them into sensational trend pieces!

I spent a long time trying to figure out why it’s taken me so long to find this tumblr, but then I looked through the archives and realized that it’s only existed for 4 days. Help them out guys, submit pictures so I have cute things to look at!

In Autostraddle’s 2009 Music Year in Review, we gave Justin Bieber the “Little Boy You Wouldn’t Mind Having as Your Girlfriend” award:

JBiebs, could you get any dreamier if you tried? You’ve got shinny shiny hair, you can sing, you’re young enough to have that whole androgyny thing working for you, you dress nicely, you dance, and Ellen loves you. So maybe you secretly sing along to his songs in your car. Maybe you shamelessly make all your friends dance to him before you go out. Or maybe you’ve heard his name and cringed at the thought of a 15-year-old singing about love. But really, give him 5 minutes; I dare you not to like him. Boy’s got pipes! (And please note how gigantically cute the guitar looks on him.)

Autostraddle has encouraged you to watch Bieber’s Rolling Stone behind-the-scenes video and his video with Sean Kingston and to watch him on QVC and watch a video of him flirting with Chelsea Handler (“which I’ve watched on repeat this morning because they’re shining, adorable beacons of light.”). We did an “I’ll have what she’s wearing” about Leah, a magazine journalism student who “just wants to get her Justin [Bieber] on” and says, “I wouldn’t say I aspire to look like him, but I’d say that Justin Bieber aspires to look like me. ‘Cause I was born first.”

I have looked at our team page and counted 15 team members with Justin Bieber haircuts.

Lesbians of the world I would like to look you in the eye and punch you in the mouth. What is so confusing. We can be critical of the way we are represented in the media or how a fun trend and cool website is parlayed to the mainstream as an apolitical movement, especially when it is linked to an apolitical pop star. I will change my tune 800% when Justin Bieber stands up for the equal rights of the lesbian fans who support him, just as the ladies iconicized by gay men participate in political and social actions to further the equal rights of their fans. (For example: Kathy Griffin, Bette Midler, Cher, Madonna, Bea Arthur, Liza Minelli, Janet Jackson, Lady Gaga and Cyndi Lauper.)

Autostraddle’s Intern Hot Laura loves Justin Bieber, and also hates DADT. I assume you are the same. (If you are not, please do not tell me because ignorance is bliss). Life requires french fries but also apples. That is how life is for people with teeth.

Today Riese read out loud to me an article from bitch! magazine, which is a magazine by angry radical lesbizi commies (like Riese) about how pop culture is good/bad for feminists. The article explains the Bieber phenomenon in words we both like and ideas we agree with. “This is good,” said Riese, “It is not on the heteros to accept us like in the other article where we made them our idols. It is on us to accept the hets and recontextualize their idols for our own purposes and that is what’s really happening with Justin Bieber. Also, you should subscribe to bitch magazine.”

So please read Top of the Pops: Justin Bieber’s a lesbian hair icon–or is it the other way around?

For many lesbians these days, that binary is as outdated and useless as a pair of TV antennae, comfortable as so many of us are with the protean mature of sexuality and gender… those spaces between girl/not girl, boy/not boy, growing up/not growing up are where we queers belong, and here’s why: they’re not cramped crevices into which we are shoved, but rather spaces we have carved out for ourselves. Justin Bieber is just the normalized version of that existence. And, like Bieber’s now-famous hair, this generation’s crop of queers really knows where it wants to go.

As my final point I would like to say that what gave me the saddest feelings about The National Post article was to read that Justin Bieber was noted as a solution to the problem that “there are few young lesbian icons, especially masculine ones, for queer girls to look up to.”

I felt sad-faced and defensive because of all the young masculine lesbians who you could look up to, but cannot, because the media is saturated with images of Miley Cyrus instead.  I am not an elitist bastard, although I am a bastard except that I am a girl, and also a dog. You think as a dog I like to read poetry or study books? No I like to watch reality shows about hairdressers and read large-type versions of The It Girls. I am not here to judge you. I am here with you. Riese had a Leonardo DiCaprio shrine in her teenaged bedroom.

Justin Bieber does not solve the problem of not having a young masculine lesbian to look up to. He is a good guy I am sure, but he’s not a lesbian. I want to rally behind the icons we do have, instead of claiming there are none. Here’s a starter list: Tegan & Sara, Hunter Valentine, Jess & Mary B, Deak Evgenikos, Dani Campbell, Daniela Sea, Samantha Ronson, Sarah Croce/Miss April, Hannah Blilie, Michele Cluney, Jiz Lee, Chris Pureka, Michele Fleury, Kim Stolz, Nicole Pina, Mélange Lavonne, Angie Evans, DJ Saratonin, Kate Moennig, that cute girl Amy from Anyone But Me, DJ Carlytron, Misty Odell, Ellis, Ty Greenstein, Blair Hansen, Heather Cassils, Stef Mitchell or Laura/Miss August. 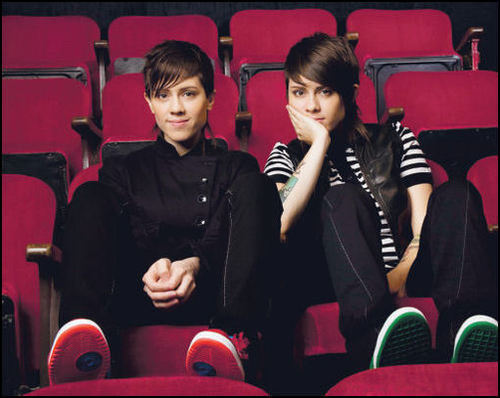 Lesbians are invisible in mainstream pop culture which is hard when you are a teenager who wants to fit in and read the articles in Tiger Beat. I am not confused about that. But I do think you all should rise against the machine, love Justin Bieber if that’s what you want to do, but know that it’s not getting us any closer (or any farther away, really) from having actual lesbian icons out there to look up to.

I have an idea/solution: In addition to Justin Bieber (if you so desire), you should look up to actual lesbians doing actual things. Like Dannielle Owens-Reid, the 24-year-old girl who spotted the trend and leaped on it, and then parlayed that tumblr’s success into a site of her own, everyoneisgay.com, where she and her friend Kristin give advice to young lesbians in need of advice which let’s be honest, is maybe all young lesbians (you are all crazy!): 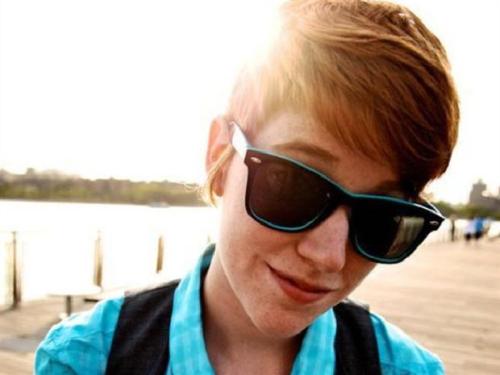 In conclusion: it’s the lesbians who look like Justin Bieber and aren’t afraid to have their pictures online and say so that are the real queer heroes here. It’s the 14-year-old girl who was willing to be quoted in a national newspaper, even though I think she should give Ani DiFranco a chance because of her perfect “fuck you/breakup” lyrics.

And if you disagree with me about that, well then just shoot me in the face.

i am a dog, i like littlefoot, leisha hailey, and to be skinny and pretty.

Tinkerbell has written 1 article for us.