Hello tigers! I’m babysitting the music column this week while Jess G travels home from the Rodeo Disco, so today we’re going to watch videos of Chelsea Handler and Justin Bieber looking cute. Among other things.

Remember Kylie Minogue’s Billboard-topping 1988 cover of “The Loco-Motion”? I can now tell you that tracks from the Australian pop star’s brand new (and 11th!) studio album, Aphrodite, don’t sound anything like that song. You can listen for yourself because the good news is that the album is streaming on NPR in its entirety. Is anyone feeling it? NPR quite accurately uses a World Cup analogy to describe the way the United States hasn’t warmed up to Kylie in the same super obsessive way that certain other western nations do, such as my homeland Australia where Kylie-hating is punishable by deportation. 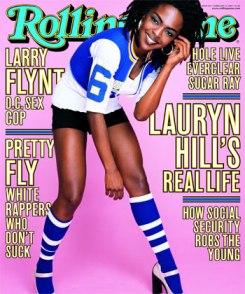 After a decade of radio silence, hip hop artist Lauryn Hill finally opened up about her sudden disappearance from the music scene in the late-90s following her success with The Fugees and The Miseducation of Lauryn Hill. Lauryn also speaks about a possible return to studio and stage in the near future, which anyone who was musically aware in the 90s or who ever saw Sister Act 2 might agree is an incredibly exciting prospect. Read or listen to the interview, created by NPR as part of their 50 Great Voices series.

When Holly Miranda performed in Sydney earlier this month as part of the Laurie Anderson & Lou Reed curated Vivid Live Festival, I was blown away. She performed an intimate show at the Sydney Opera House, commanding the small room with just a keyboard and a guitar and serving up one of the best performance I’ve seen all year. What I didn’t realise is that she also played a sneaky 3-song set on the Sydney Opera House forecourt for Shoot The Player. Check out Holly’s cover of Tool’s “Ænima” –

Last week I stumbled across an interesting New York Magazine profile on Dr. Luke, the songwriter and producer responsible for a ton of #1 summer hits that you can never get out your head but would really like to. Dr. Luke – born Lukasz Gottwald – is the man you need to thank the next time you find yourself bopping along to Avril Lavigne‘s “Girlfriend”, Ke$ha’s “Tik Tok”, Flo Rida’s “Right Round” and certain bi-curious anthems I can’t even talk about.

The anticipated first solo album from OutKast member Big Boi, Sir Lucious Left Foot: The Son of Chico Dusty, is now being streamed in full on myspace. The album is released officially next week.

Last week Justin Bieber took a break from The Real L Word to visit Chelsea Handler on the set of Chelsea Lately. Defamer Australia tipped me off to the clip, which I’ve watched on repeat this morning because they’re shining, adorable beacons of light. Except when they’re flirting. Stop it, you guys. Just stop.