Hello and welcome to this recap of Supergirl episode 615, “Hope for Tomorrow,” aka the one with Esme’s two mommies.

Previously on Supergirl, Nyxly went to the Netherlands because totems shmotems, Kelly and Alex saved a little girl from failure fosters, and Lena made herself right at home at the Tower.

We open on Kara flying in through Kelly’s apartment window with arms full of toys, cheerfully greeting Alex, who is painting a mural of hopes and dreams. Everyone is very excited to meet Esme. Kara is so ready to be the best Aunt ever, and help ease this little alien into life on Earth the way Mama Danvers did for her. 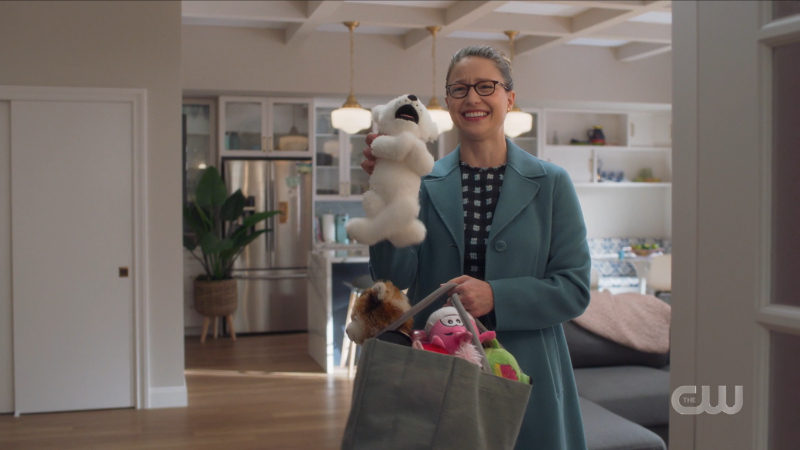 She’s going to be the best aunt ever and I am EMOTIONAL about it.

Alex is excited but also very panicky in that very Alex way. When Kelly comes home with Esme and leads her to her new room, Alex is so nervous that she won’t like anything, she starts rambling and saying she can change whatever she wants as Kelly and Kara watch, amused. 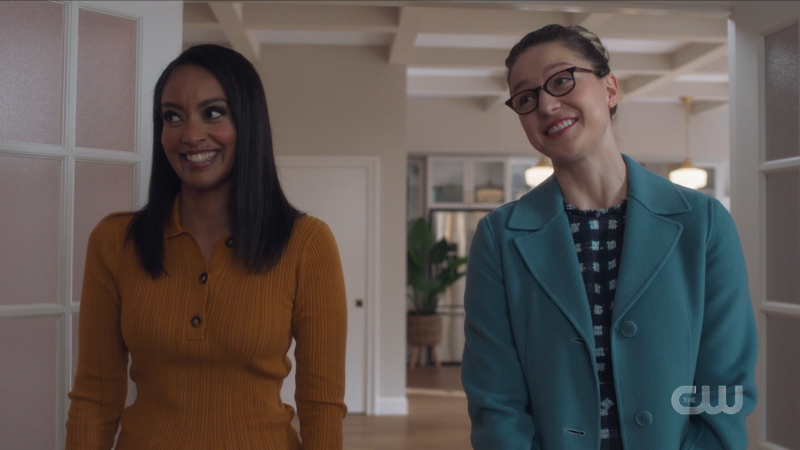 Alex introduces her to Kara, who tells her that she was adopted too, and gives her some stuffies to join Lovey, the zebra friend Esme already has. They introduce her to J’onn and she shakes his hand because she’s THE CUTEST. 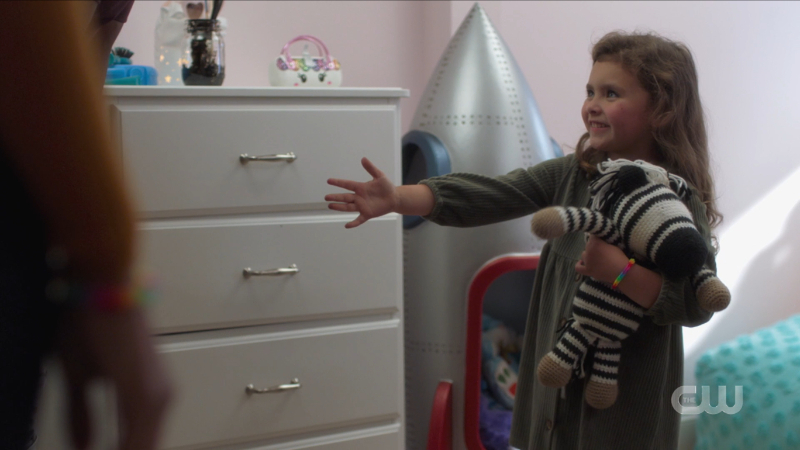 She goes to put Lovey on a shelf and starts to fall through a wall, but J’onn catches her. Scared, she listens quietly while Alex holds her and says that she has mimicking powers and that she’s sorry she didn’t warn her that J’onn was an alien. 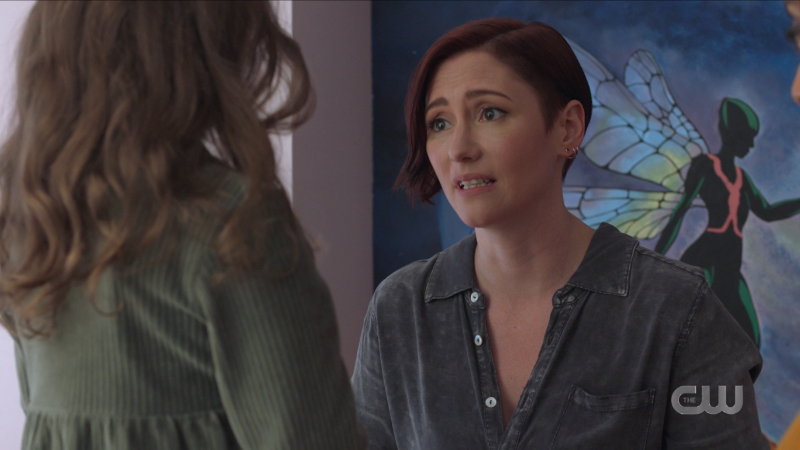 I know they #struggled this episode but little things like how they get down on her level to talk to her are huge markers of them being Good with Kids.

But then Esme squeaks out a teeny apology and Kelly pulls her close too, promising she didn’t do anything wrong. A phrase that cannot be undervalued. 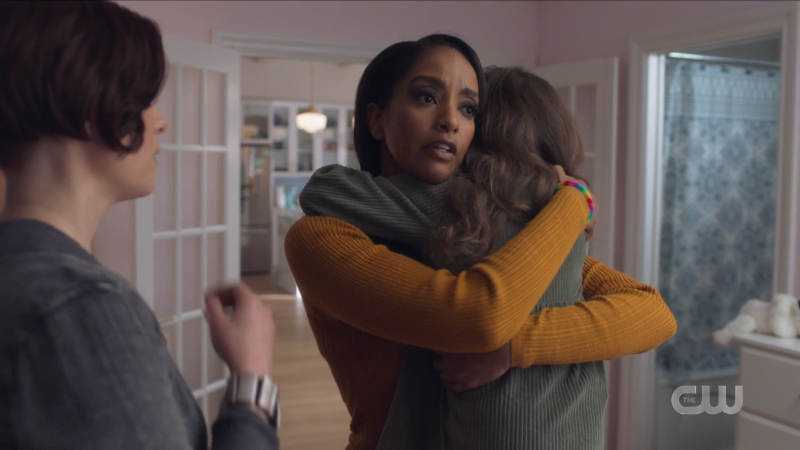 This is such a good hug?? I’m jealous.

Up on the glam rock spaceship, Nyxly is annoyed that CatCo is reporting that the Superfriends are the heroes and Nyxly is the villain, but Nyxly is the hero of her own story. She says there wouldn’t have to be so much fighting and chaos if the Superfriends would just leave her to her totem-fetching tasks. But she’s no stranger to someone rewriting history to benefit themselves; most notably, her own father.

Mitch gives Nyxly a bracer infused with the courage totem to pair with her power dampening cuff to give her a little bit of magic. She can now wield the power of courage…and thus, fear. So now all she needs is hope.

Next we go back at Kelly’s apartment, where I presume Alex lives now? RIP the loft? Anyway, Kelly and Alex talk about Esme and Alex feels so bad about how spooked Esme got within ten minutes of being in her new room. All Alex wants to do is protect her. Kelly understands, she feels it too, but she also feels so, so lucky to be starting a family with Alex. And they’re going to give Esme everything she’s been lacking in her life so far. 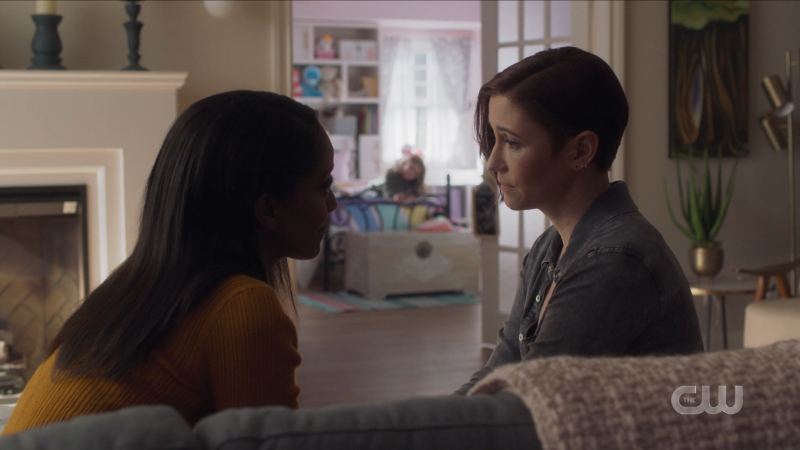 This episode did nothing for my desires to start fostering kids even though I’d be doing it alone.

Plus, they can and will help her with her powers. They’re the perfect family for a little alien girl.

At the Tower, Brainy is asking what kind of block set he should get little Esme, and Lena and Kara IN UNISON say he should get her a train set. IN UNISON. Lena says it’s because then she can go wherever she wants, and Kara says she would have said the same exact thing. 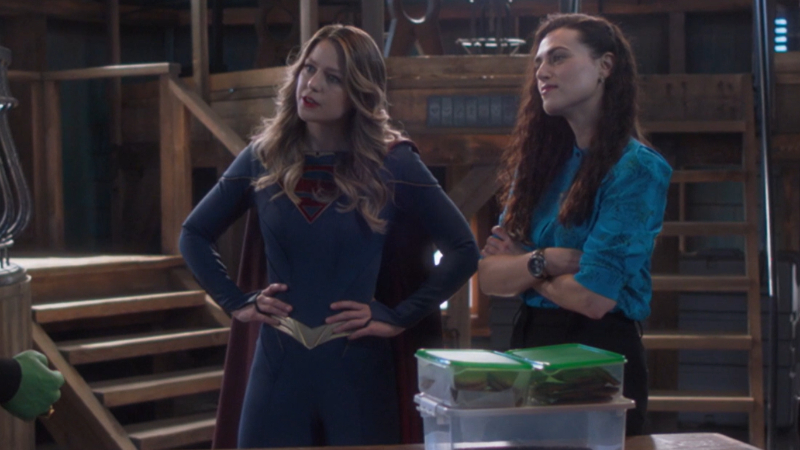 Brainy tells Supergirl about Nyxly being spotted at the Hague, so she and J’onn go to stop her. She tries to freeze them with fear, but frankly they’ve seen worse, so they manage to break through. Nyxly gets away, blasting everyone with courage totem energy as she goes, but she doesn’t take the totem with her, so it’s a net positive.

Back at the Tower, Alex introduces Esme to Lena, and Esme promptly says the truest truth the way children often do and tells Lena she’s very pretty. 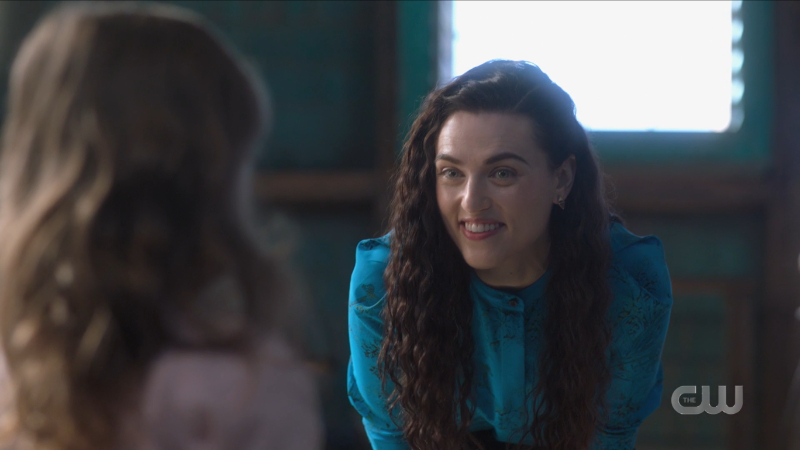 I feel like they don’t acknowledge how ethereally attractive Lena is enough on this show.

Alex asks Brainy for help learning more about what kind of alien Esme is, and after he rattles off a story, she declares him funny. She’s a smart one, this kid.

Meanwhile, Kara activates the Hope totem, and her gauntlet is to inspire hope that will last, which J’onn thinks he has in the bag.

When Kara gets back to the Tower, she finds Lena there reading her grimoire, trying to find a charm that will act as security around the humanity totem in case it calls into the wrong hands again. Kara updates Lena on her day and her new gauntlet and it’s just everything I wanted from this relationship. Granted, with a little less kissing, but you know what I mean. Lena fully, fully integrated into the team, Kara leaning on her, etc.

Kara is worried about what will happen if she fails the gauntlet like she did with the courage totem, but Lena feels pretty damn sure her hero Kara Danvers has a head start over Nyxly when it comes to solving a hope-based puzzle. 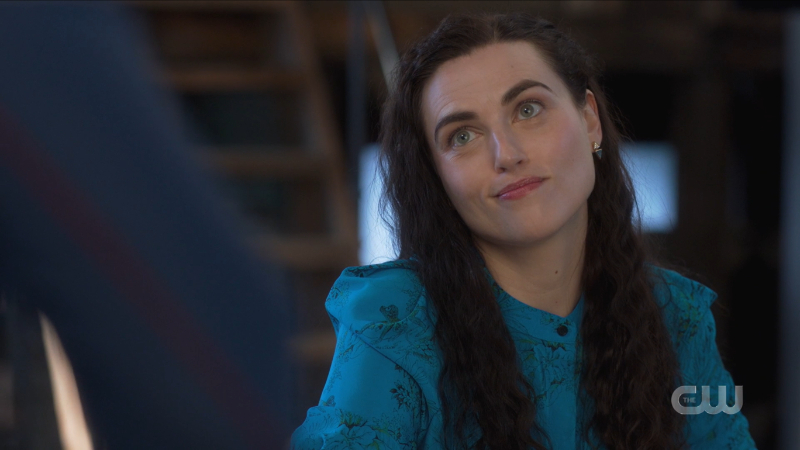 “And historians will call them close friends besties, roommates, colleagues, anything but lovers. History hates lovers.

When Alex comes up and asks Kara if she can help instil some hope in a frustrated little girl trying to reckon with her powers, they figure this is as good a place as any to try to start to solve the gauntlet. Lena even says, “el mayarah” to Kara as she goes.

Alex introduces Esme to Supergirl, but between Esme’s obvious genius and also her power sensing abilities, Esme immediately knows Supergirl is Kara and Kara is Supergirl. 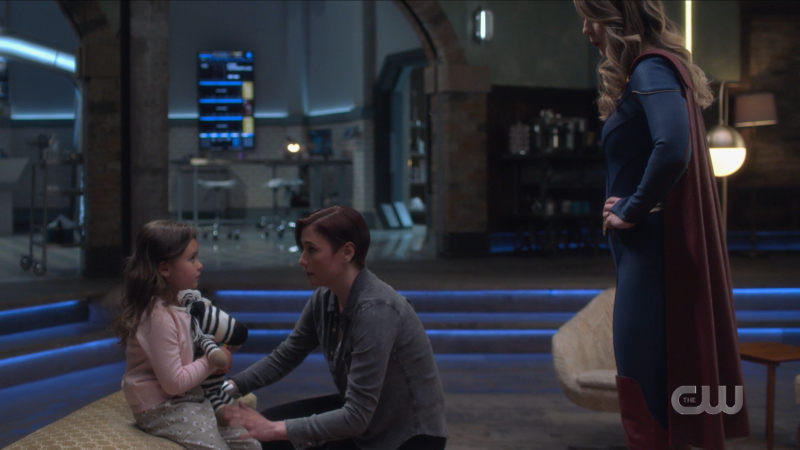 Ah, that moment you realize maybe you’re smarter than some adults. A turning point in a young gifted kid’s life.

Alex tells her to keep it a secret and Kara begins her lesson; they figure that especially since Esme will probably be around Aunt Kara a lot, it’s a good place to start helping Esme gain control of her powers.

Kara is so good with Esme, gently coaching her through superhearing, listening to Alex’s heartbeat, and every time she starts to get a little overwhelmed, Alex just encourages her to push through it, to keep trying.

But she realizes this may be the wrong approach when Esme and Kara overhear an accident outside and Esme calls Alex horrible for making her listen to that and runs off. 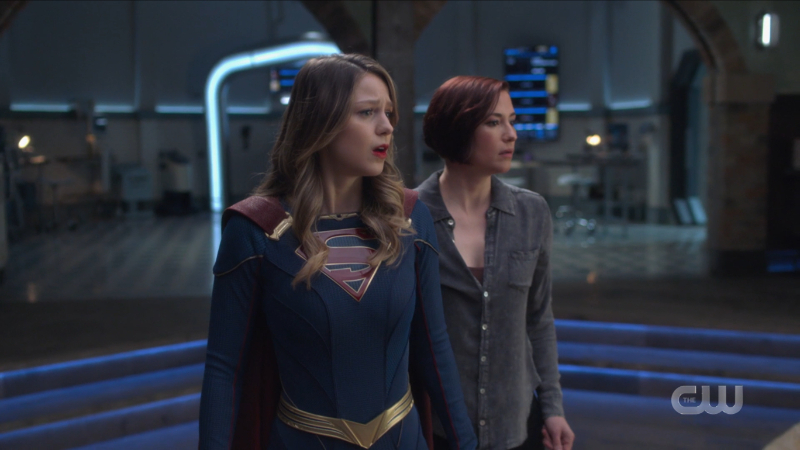 Are they going to get Esme little lead-lined glasses to wear around Aunt Kara?

Up on the ship, Nyxly is starting to feel hopeless about her hope gauntlet. She knows she’s no match for the literal Paragon of Hope in this regard. So she decides to take a different route. She’s going to force Supergirl to finish the gauntlet, then take the totem; all three of them, in fact.

All she needs is a little… leverage. 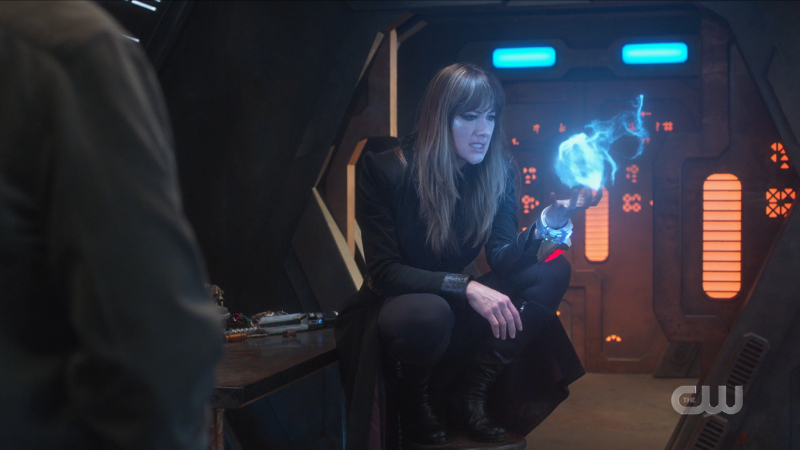 Nyxly is very good at the Bisexual Perch.

In The Hague, J’onn is trying to keep the diplomats from Kaznia and Corto Maltese from declaring nuclear war on each other, but they were affected by the totem so they’re proving hard for him to keep calm. The American woman who is there for some reason, I think they said she’s the secretary of defense but I’ll be honest this totem business was side plot to me this episode, anyway she wants him to brainwash the diplomats into doing what she wants because probably that’s what they would have wanted but J’onn refuses.