Previously on Legends of Tomorrow, a bunch of villains from throughout history were released from hell and the Legends had to travel through space and time to kill these Encores with hell weapons, they learned their buddy Charlie was actually Clotho the fate and she got tricked by her sisters to rejoin their ranks and they rewrote the fate of the world, but the Legends rebelled from their TV universe, much to Charlie’s dismay.

As she heads back to her sisters, Charlie is realizing that the Legends have started the rumblings of a rebellion, and she is so stressed about it. 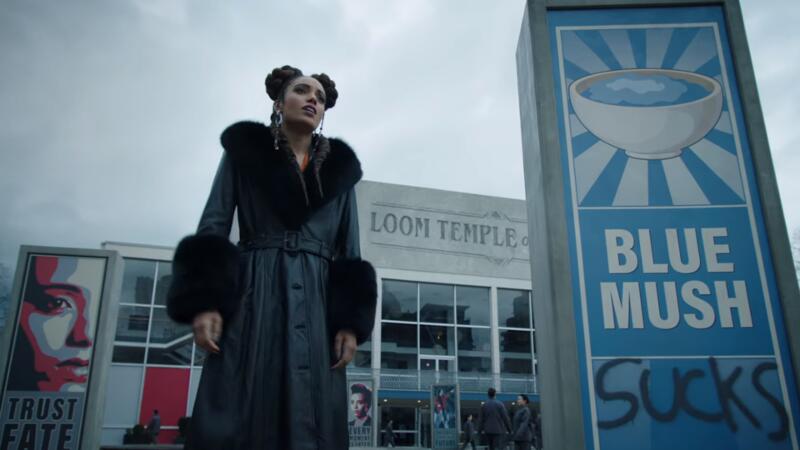 Her desperate little, “Even I like the blue mush!” was so cute.

She tries to play it cool when she gets to the Temple of the Loom and sits next to her fellow fates in the throne room, where they will start seeing their people’s requests, trying to pretend like everything is fine.

Meanwhile, the Legends, fresh out of their TV boxes, are trying to find the Loom. And also thus begins a series of hilarious moments where Zari 2 and Original Zari joke about their continued mutual existence, like how Zari 2 thinks Original Zari’s voice is weird.

They run into Gary and Mona, who tell them that if the Waverider is anywhere, it’s likely at the Forbidden Dump, where all the fun things go to die.

So while Ava leads half the team there, Sara and Constatine go to the Hall of Fates. They use Sara’s blindness to their advantage and Sara easily takes down some guards, and they lead the rest of the team in to find the Loom. 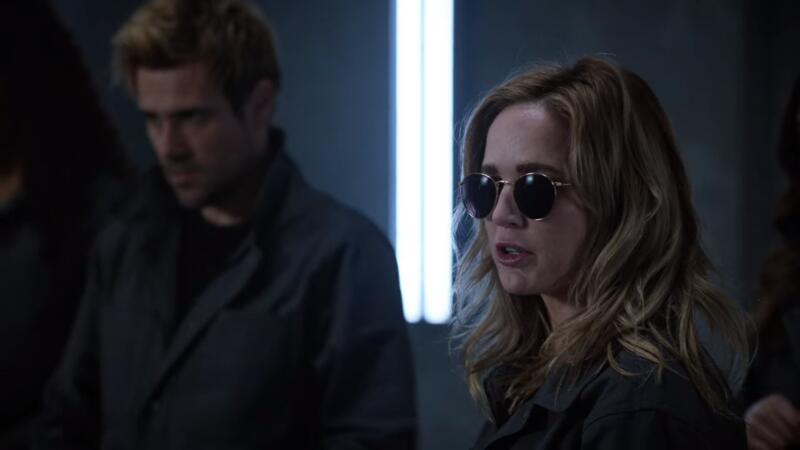 In the throne room, one worshipper asks for more blue mush, and Lachesis grants it nobly. The next asks for her favorite TV shows to come back from hiatus, which is a mood, and when Charlie says the actors needed a break, she asks if they were tired from the crossover. Which is already hilarious, since often CW actors do indeed need a hiatus from the crossover, but just to add a little extra Legends jab at it, Atropos asks with disdain in her voice, “What is a crossover?”

When Lachesis realizes what Clotho did, she is furious, but Clotho tries to defend her old crew. She points to how they were cleaning up the Encore mess and it wasn’t even their fault, and Lachesis (whose fault it actually was) gaslights Charlie into thinking the Encores were HER fault, because Clotho broke the Loom in the first place, creating chaos and therefore creating villains. Lachesis asks her sister what she thinks the people would prefer, more choices, or everlasting peace. Charlie looks out over these helpless mortals, thinks of all the friends she’s lost or almost lost, thinks of all the pain and suffering she thinks she caused, and sits down, giving in. She says they would want peace. 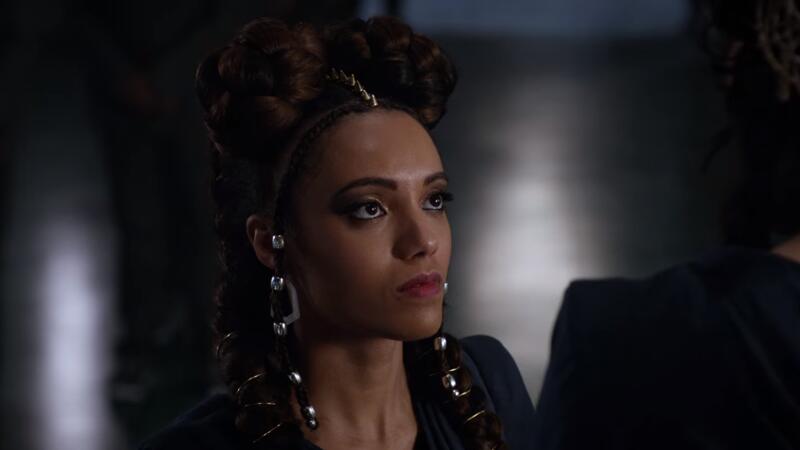 You can’t be so afraid of pain that you keep yourself from feeling anything at all, bb.

Sara, Astra and Constantine continue their quest for the Loom, and once they find it, they set out to destroy it. Astra doesn’t think she has enough power to do it, but Constantine knows she has her mother’s magic blood in her and encourages her to channel it.

At the Dump, Ava, Zari, Nate and Mick all find the Waverider, so Mick heads off to find Lita before they go. They realize Gideon is broken, and that they need a superconductor to get the ship back up and running again, so Zari uses Steely Nate so Ava can get them off the ground.

When Zari 2 and Behrad go undercover in the throne room, they realize they only see two of the Fates…but that’s because Atropos found Sara first. 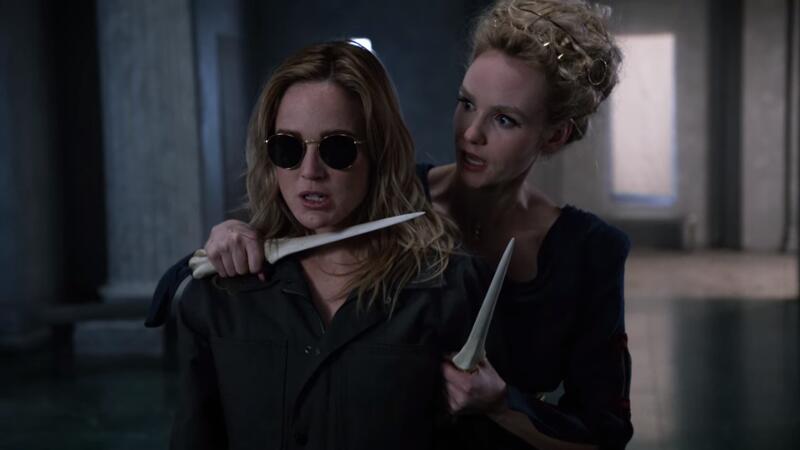 “Ava? Is that you? Save that for tonight, babe.”

Atropos is amused that Sara “bears the scars” of their last encounter, but Sara says her scars make her stronger before using her new Fate-given powers to defeat her at her own game.

Astra starts to realize that she replaced some of her memories with Lachesis, causing her powers to falter, but as Atropos is telling Sara that these powers come from her, Sara insists that her real power comes from her team. To prove her point, the Team Totem swoops in and blasts Atropos away from Sara. Sara realizes that if she has some Fate power in her, she can use it to her advantage, and snipps Atropos’ thread. Defeated at her own game.

The Legends all rush back to the Waverider and quickly jump out of that time period to avoid Lachesis’s wrath, and when they land, they’re still in the Forbidden Dump. But suddenly, Sara can see. They realize her powers must have been linked to Atropos and with her gone, she’s back to our regular old Paragon assassin. And it feels appropriate that the first thing she sees is trash.

But the second thing she sees is her beautiful girlfriend, and she’s thrilled about it. 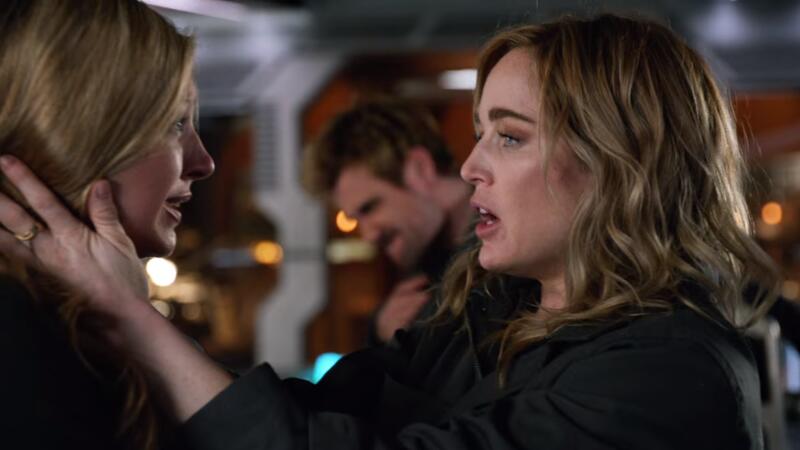 I’d miss that face, too.

When they head outside to see when they are and what has changed, they learn that they’re only a few months into the future. Things seem normal at first glance, until they realize that everyone is relying on their smartwatches to make every decision for them. And instead of Siri or a Google Assistant, they’re asking Fate. The Legends see the billboards all around them and know that Lachesis might not have the loom, but she’s still controlling everyone’s fate.

The Legends head to where the temple used to be but now it’s a history museum documenting the atrocities of free will to help scare people into trusting the Fate technology. The Legends head into the Hall of Bad Ideas, which features arguably great ideas like glitter and spring shoes, along with unequivocally bad ideas like the Shake Weight and The Thong Song. Ava goes over to this Sisqo exhibit and is reading the lyrics aloud, confused as to how this was such a smash hit in the early aughts, to which I have no good answer for her. The song slaps but the lyrics to leave something to be desired.

Nate really wants to play the song but Sara stops her and leads her team to the Hall of Villains. The Encores they’ve spent the season fighting (plus more of history’s big bads) are all displayed and ranked here, including the lovely Marie Antoinette.

Behrad and Original Zari are still trying to fix the Waverider, and I’m just so glad we got a little more time with our flannel-clad tech genius. 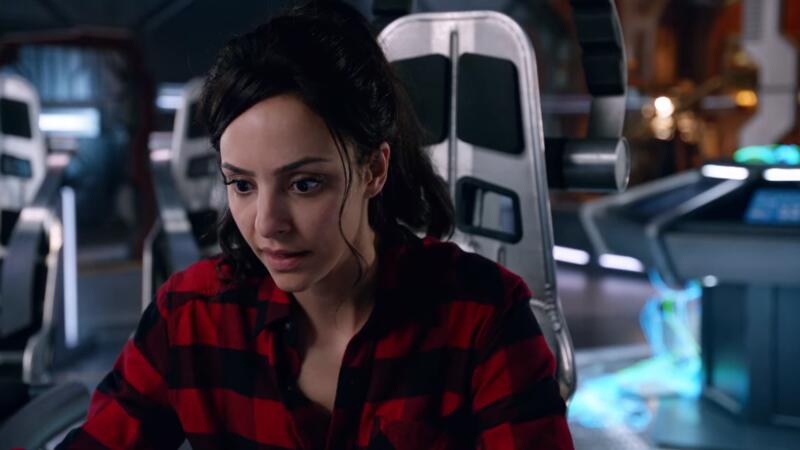 Who will take up the plaid representation when she’s gone?

But something isn’t quite right, because Behrad has a flash of a memory of dying in her timeline.

As the team goes through the Hall of Villains, they realize that they’re cataloged here too, labeled Godkillers. I feel like we’re tiptoeing on infringing the Worldkillers here, but Lachesis wouldn’t care too much about that now would she. Also, Ava is a little hurt that they’re only number two on the list. 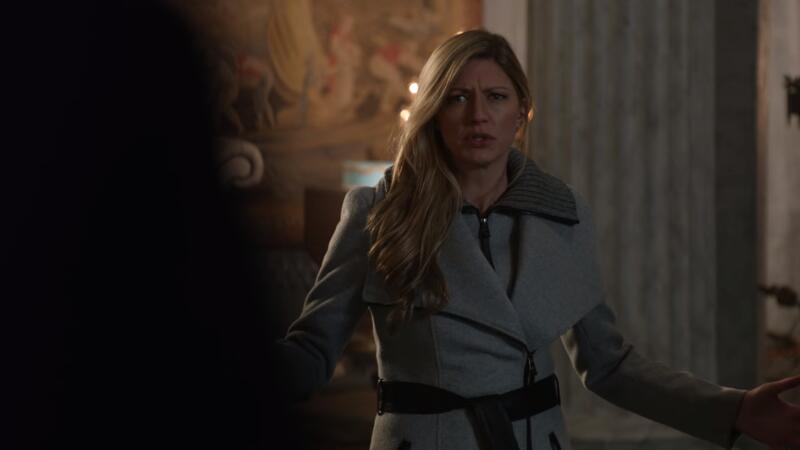 If you’re gonna be the worst, you might as well be the best at it.

They go to see who the #1 worst villain in history is, and are surprised to find Charlie there, trapped only by the will of her Fatewatch who tells her to stay. She’s so scared that they’re there, so scared she’ll hurt someone again. So they feel they have no choice but to knock her out and take her back to the ship. 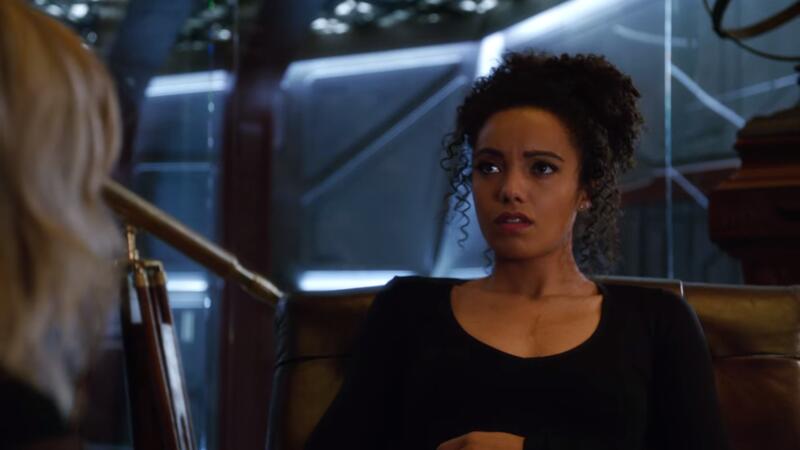 “I had the strangest dream…and you were there, and you.”

Charlie is nearly frantic because she’s not where the Fatewatch told her she should be. She tells her captains that she regrets being the Loom Breaker, Creator of Chaos. It’s so sad and scary to see wild and free Charlie having been scared and manipulated to the point of being this scared and obedient Clotho. Sara and Ava blame themselves, for leaving Charlie behind and letting Lachesis get into her head. 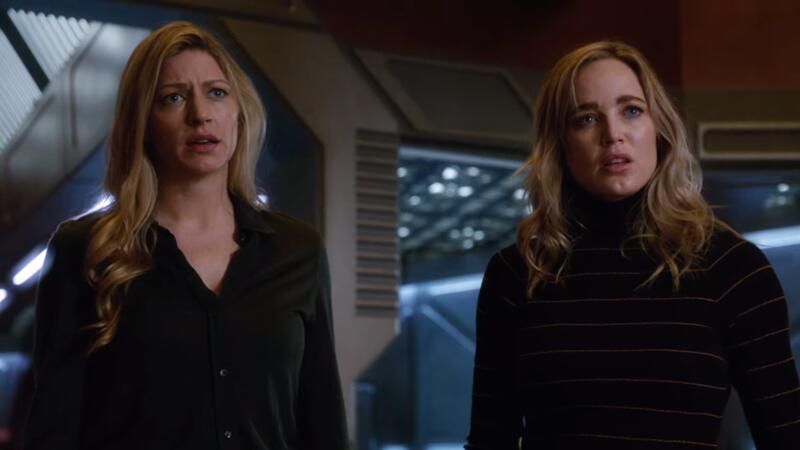 Charlie insists that Lachesis only did what was best for her, because they’re family, but Sara says that THEY’RE her family, not Lachesis. That overpowering and controlling someone isn’t loving them. That deciding what’s best for you instead of helping you decide for yourself isn’t taking care of them.

And Astra is learning the same lesson at the same time. All these years she thought Lachesis was loving her, raising her, but she was really training her, making her forget her own mother. But that’s not reality, and it’s not what Astra wants.

The Legends get together to try to sell Charlie on the concept of free will, but everything they offer her she has an answer for. The Beatles were great, sure, but they also inspired Charles Manson. Mona tries to use Mamma Mia 2: Here We Go Again (a nice little nod to Original Zari’s loop episode), but Charlie reminds them that Napoleon once almost killed them because of Abba. Ava and Sara try a different route, and try to point out that their entire relationship wouldn’t exist without chaos. 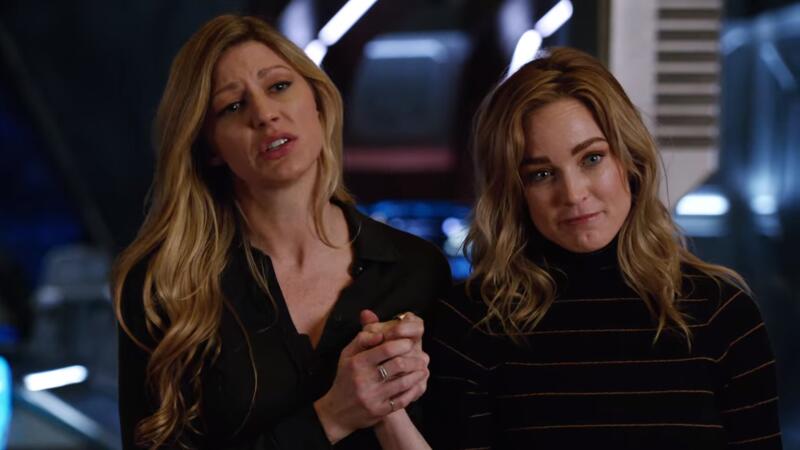 “I mean look at us! We’re disaster queers! Even if our paths had crossed we wouldn’t have ended up together without the gentle nudging of these other fools!”

Random twists of fate brought them together, an assassin and a clone, a vigilante time traveler and the lead of the agency built to thwart them. Sure there have been mistakes along the way, but sometimes mistakes just help guide us toward our destiny. But Charlie remains unconvinced. 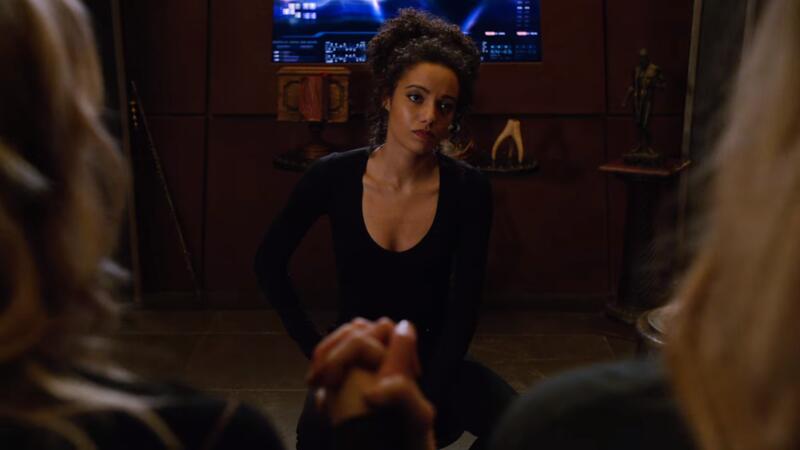 After giving up trying to sell free will to Charlie, the Zaris work together to try to find the Loom of Fate that surely must still exist if all these people are zombies, all while Behrad tries to hide the fact that a bullet wound is slowly forming in his chest. With Original Zari’s guidance, Zari 2 finds the source of the Fatewatch, but it’s not the Loom at all. They really did destroy that. Instead, the people are being controlled by Lachesis and Gideon.