When Charlie realizes that they’re still on a mission to stop Lachesis, she tries to talk them out of it. The Legends, in turn, try to explain that they need her help to expose Lachesis as a fraud. But Charlie doesn’t want any part of this. 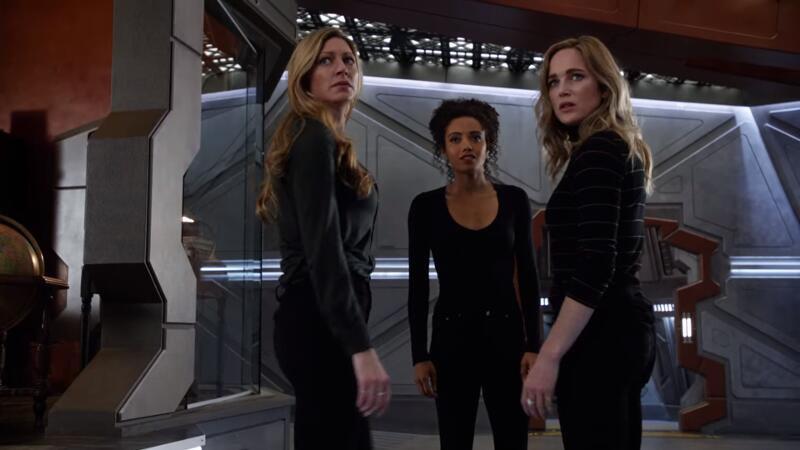 So the Legends move forward with their plan without her. When Lachesis gets to the point of the History Museum tour that she’s supposed to reveal the Loom Breaker, Lachesis is faced with Astra instead. She realizes that Lachesis never really loved her, she was just a placeholder for Clotho. She smiles at this woman she once trusted and dares her to fight her. “Smite me,” she says, a mischievous smile on her face, knowing full well Lachesis doesn’t have her powers. And when Lachesis is all but “you and what army,” the Legends reveal that they were hiding in their own exhibit this whole time, really nailing the mannequin challenge.

The Zaris, meanwhile, use their combined knowledge and cleverness to hack into Gideon to get her off the Fatewatch network. 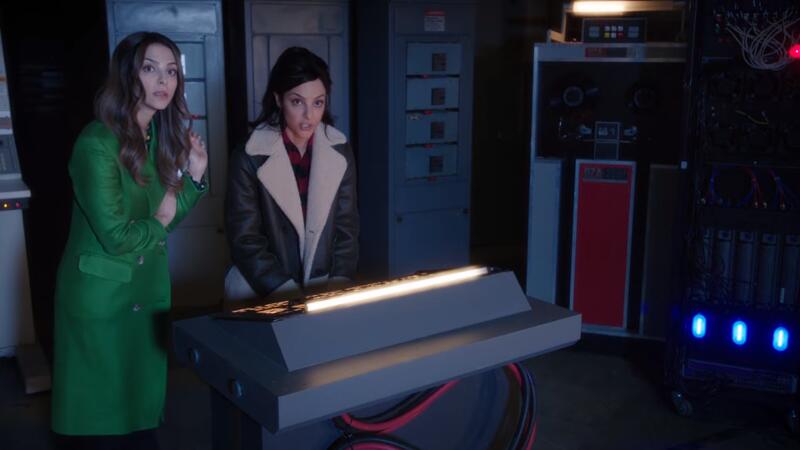 While Sara, in her old White Canary outfit, explains that sometimes they mess things up for the better. And that it’s okay to have free will and make the wrong choice sometimes. 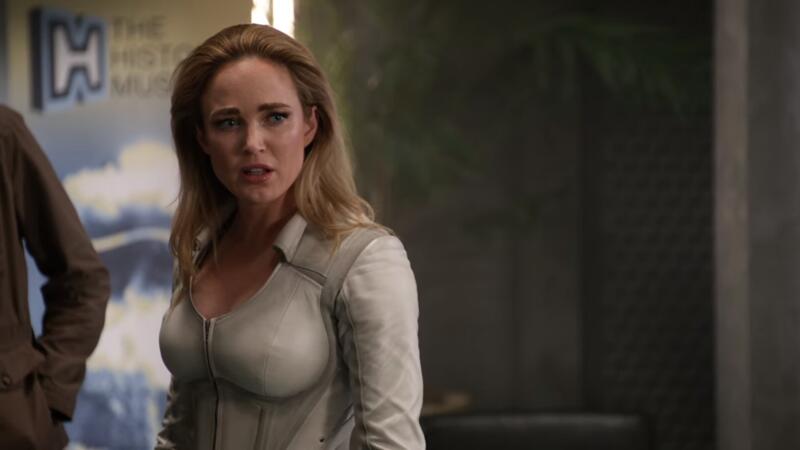 And then the Zaris manage to stop Gideon from being a pseudo-Loom, leaving Lachesis without her humans doing her bidding. 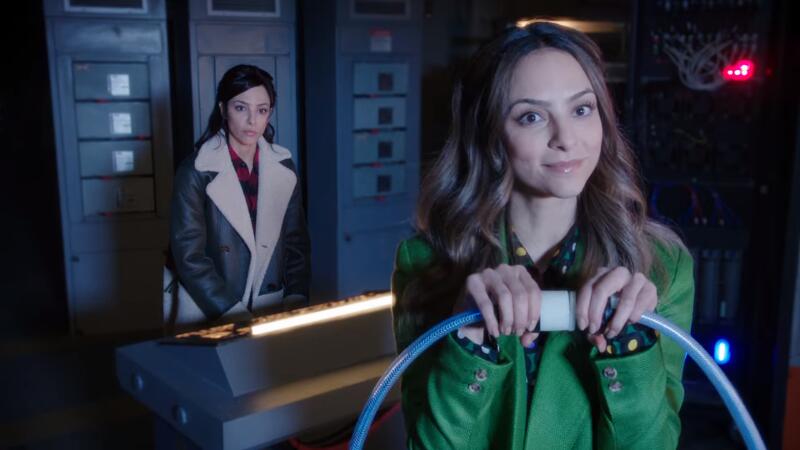 Zari 1 looked deep within my soul and WINKED.

Lachesis still has an army of her own though, and releases the souls of the villains she’s entombed in the museum, so they spring to life and start fighting. In one of my favorite exchanges of the episode, Nate asks Sara if she has any ideas, and Sara says, “Just a lot of bad ones,” which would be funny enough on any other day, but then when you realize the Legends’ next step is to grab makeshift weapons from the Hall of Bad Ideas, it’s just delicious. Ava grabs the Shake Weights. 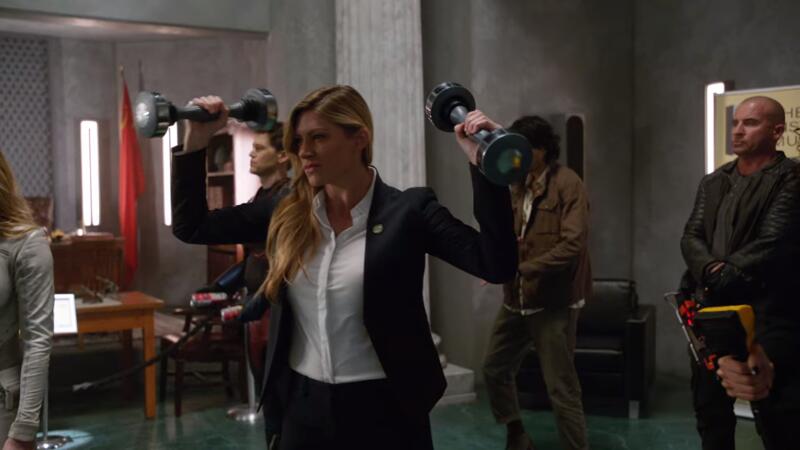 She’s just! So serious about them! Why is this the funniest thing I’ve ever seen!

Astra swipes the Flowbee, and Sara wields a pogo stick like it was part of her arsenal all along. 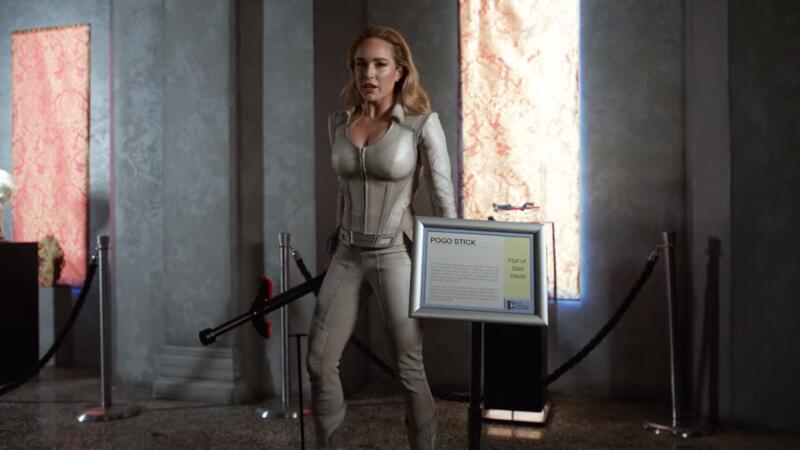 Queen of the Improvised Weapon

Nate hits the Thong Song button on the way back into the fight, a perfectly ridiculous choice to soundtrack the Legends’ big boss battle. Marie Antoinette fights fiercely, but is ultimately beheaded again, much to her dismay. 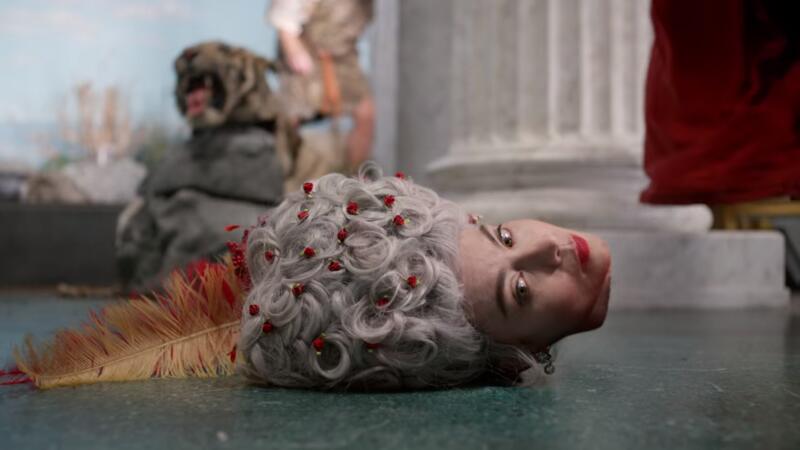 The Legends quickly realize that the Bad Idea weapons won’t actually kill these Encores, and they need hell weapons. The ones that are all the way back on the Waverider.

On said timeship, Charlie is moping when Lita finds her. Lita is real with her in that candid teenager way. She says sure, 49% of life is just garbage, but 51% is good. And that 2% difference is worth fighting for. She uses her very existence as proof that chaos can be good. She was born of chaos. But the messy bits of life are what make it beautiful. The chaos colors a greyscale world. 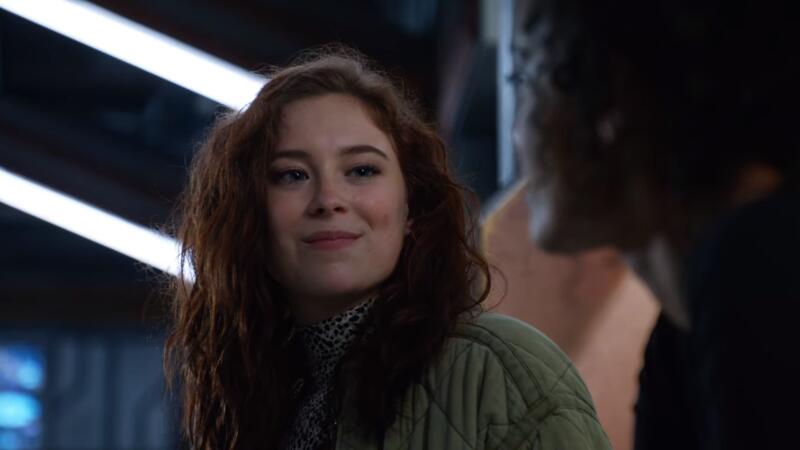 “I was ready to burn everything to the ground a few weeks ago. And now I’m literally saving the free world. Trust me.”

So Charlie rounds up all the hell weapons and goes to join her family. When she gets to the fight, Sara is so excited to see her. She apologizes for being late to the party, but Sara says she’s wild and unpredictable, just the way they like her. She hands Charlie a hell dagger and says she’s the only one who can stop Lachesis. 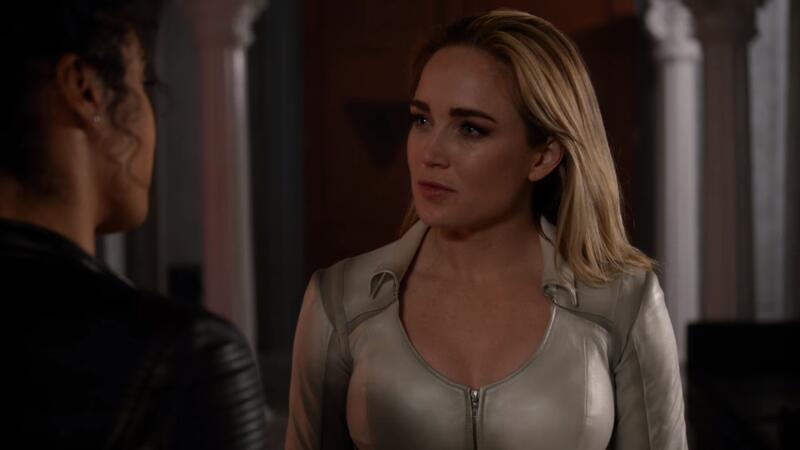 Someone who looked this good encouraging me would give me the confidence to try literally anything.

Charlie stands up to her sister and realizes that she thought she needed Lachesis to forgive her, but maybe it’s the other way around. So Clotho forgives her. Lachesis laments going from being a god to being nothing, but Charlie promises her that being a human is a world of chaos is a beautiful thing, and not to waste it by trying to control things she has no right to control. And Clotho leaves Lachesis to ponder her new fate.

After the battle’s done, and they kind of won, the team heads back to the Waverider. Original Zari and Zari 2 are giving each other shit about their respective boyfriends, and for some reason neither of them mention their crushes on Charlie but whatever it’s cute. 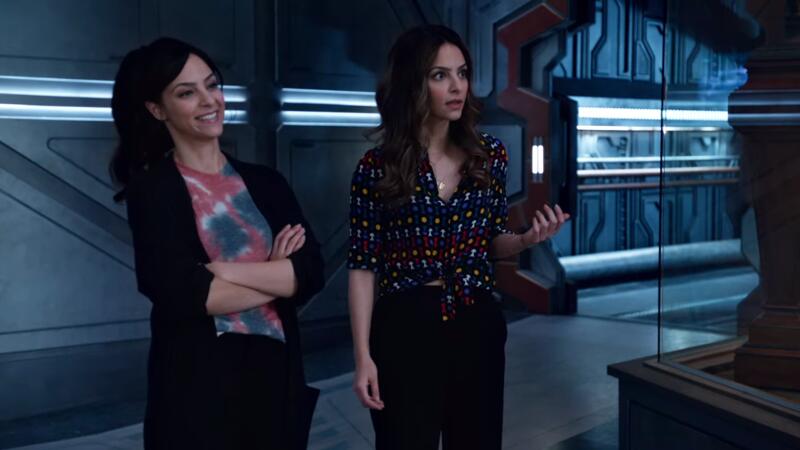 I think having two of me at once is my own brother’s personal nightmare but Behrad is taking it in stride.

But then Behrad’s phantom wound starts to spread. Original Zari realizes that her existence is causing a temporal disturbance, and that in order to keep Behrad safe and Zari 2’s timeline intact, she has to go back into the totem. She turns to her brother and says it’s her turn to save him, and starts to say her goodbyes as my heart breaks.

Sara wants to do something, to try to find a way, but Original Zari is resigned to her fate. She says Sara’s already done everything she wanted her to: she found Zari in this timeline, and she “brought me home.” 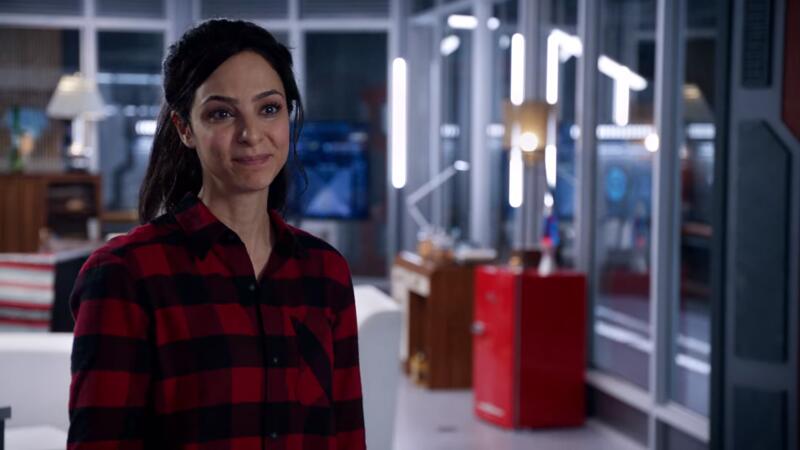 MY HEART IS BROKEN. I LOVE YOU MORE THAN YOU LOVE DONUTS, ORIGINAL ZARI!

She says one last teary goodbye and totems herself back into Behrad’s bracelet.

I know that technically it would have been impossible to keep both Zaris (and also probably a nightmare for Tala Ashe) but oh i loved them both so much and I didn’t want to say goodbye. Hopefully we can still visit her in her little totem world every once in a while.

The Legends are ready for a break to celebrate their latest victory, and Charlie has an idea of where to start. They all don their best 70s London punk garb and go watch Charlie perform with The Smell and sings a punk cover of Mr. Parker’s Cul-de-Sac, because of course she does. 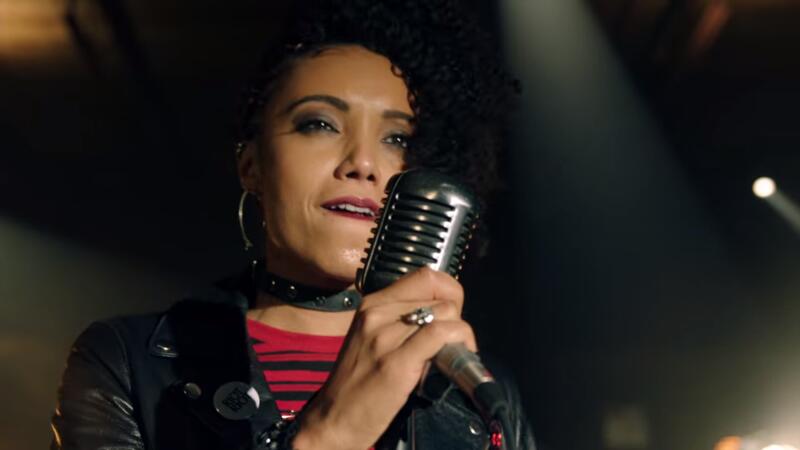 This my friends is what we call bringing it full circle.

Astra gives Constantine his soul coin back as rent for spending the hiatus at his mansion, and the Legends all mosh and enjoy their last hoorah for a while, Charlie blowing them a kiss from the stage. 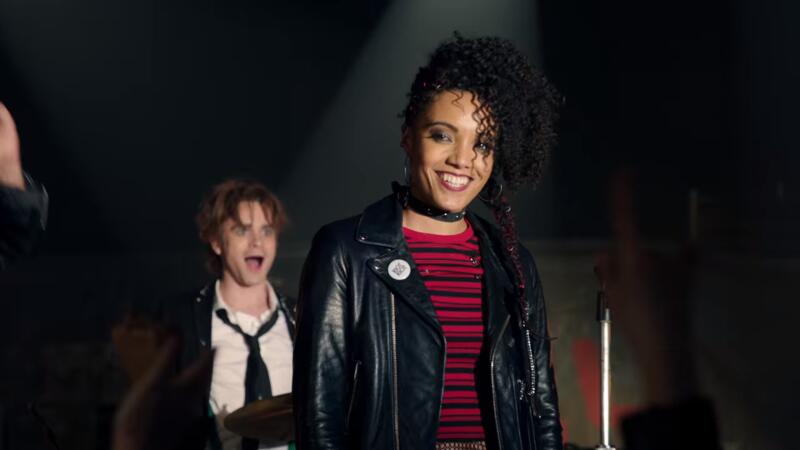 I feel like Maisie and Tala have played more characters between them than the rest of the cast combined.

On the way out, feeling sloppy from being able to finally let go and have fun for a night, Charlie lets them know that this is her stop. She can finally stop running for the first time in centuries, and this is where she wants to stay. The gang says goodbye, Sara letting her know that she’s welcome back any time. Because once a Legend, always a Legend. 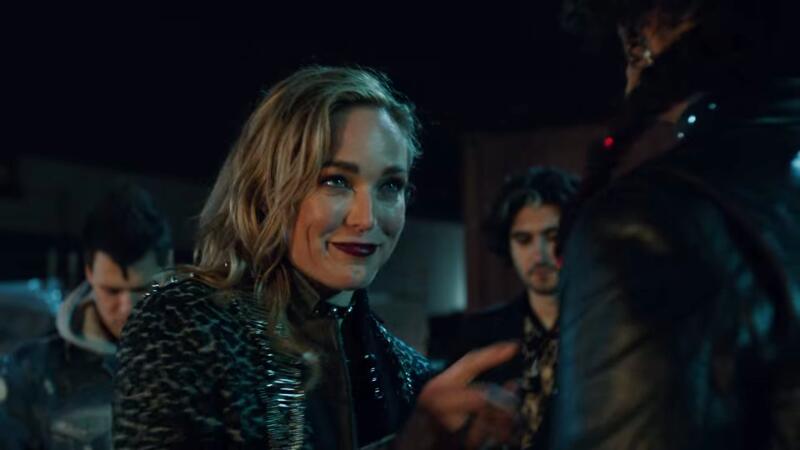 LOOK AT THAT LIPSTICK! THE SEPTUM RING! SEND HELP!

And here we say goodbye not only to Charlie, but to Maisie Richardson-Sellers. She came to us as Amaya, then Charlie/Clotho, and she brought such unique energy to each woman. Amaya was sweet and gentle and brought a sense of wonder to the already-kind-of-jaded group. And Charlie…oh, Charlie! She started as a captive, an enemy who stole their friend’s face, a rebel with an attitude who hadn’t stayed still long enough to find a family since she left her sisters. But she learned and she grew and she flirted and she loved until the selfish, chaotic girl risked everything to save the Legends in the end.

Maisie was a queer actress playing a queer character, and an amazing one at that, and it’s hard to watch her go. But the truth is, Maisie’s contract was up, and she wanted to move on to new horizons, start new projects. And so, the writers gave her one last season to shine, making the entire thread of this fifth season linked to her character. Gave her a hero’s ending. (And didn’t kill her off just because she was leaving the show! What a concept!) It sounds like the parting was mutual and planned, and that the writers will always leave a time courier available in case she wants to join the Legends again someday. 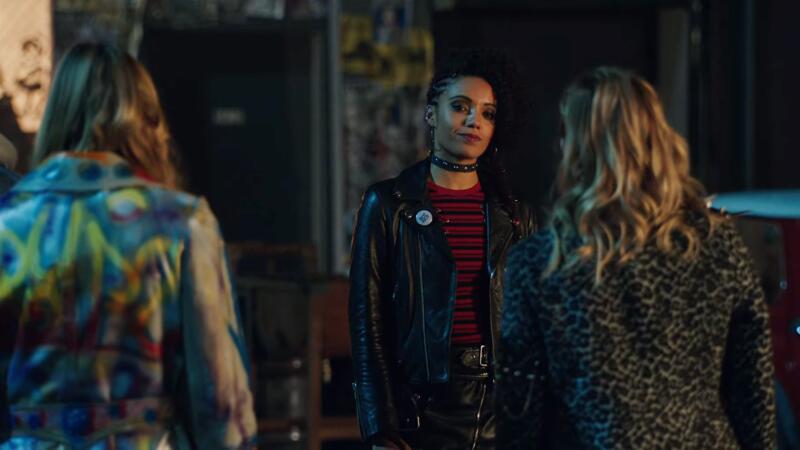 Miss you already, you beautiful pansexual shapeshifting Fate, you.

As the Legends start to leave, Sara hears something strange so she hangs back from the group just a few steps, but enough that in their bustle to get back to the ship, they don’t see a beam of light come down and lift Sara up and up and up. It seems our Captain was abducted by aliens. 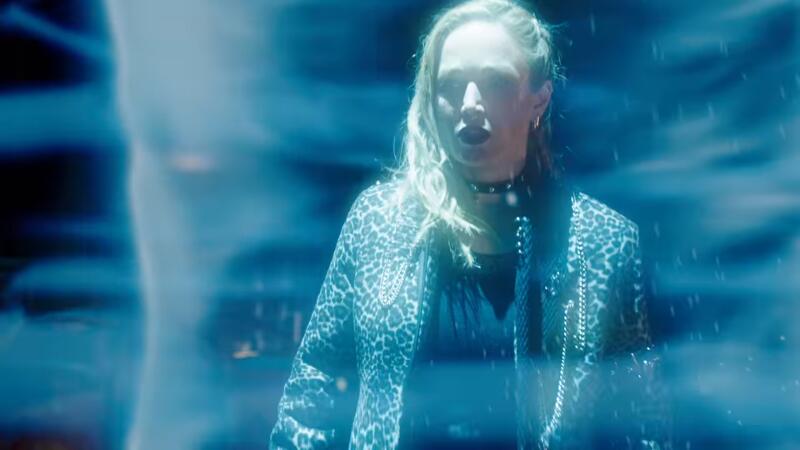 Maybe it’s just Kara picking her up for game night.

The good news is, the show was already renewed for a sixth season, though Beebo knows when it will air. Until then, I thank you so much for being patient with me and for reading my recaps over this season; it’s been so fun to watch and laugh and theorize with all of you.