One, if not the only, perk of watching the same thing every day for months (no one explicitly said I had to watch it every day but here I find myself doing it anyway) are the details that seem to reveal themselves when they feel you are ready. For example, I missed Carol winking at Therese outside The Cape Cod Room at The Drake Hotel in my first viewings, perhaps because this particular detail knew that I wasn’t going to be prepared for its simultaneous casualness and glamour while in the middle of some existential reeling. Patiently it waited for me to find my footing.

Well into this journey, and many viewings over, I thought everything that could have revealed itself had. I was wrong. The detail that revealed itself 20 days into this challenge was one that wanted to make sure my dedication as a Carolhead had became unconditional. One that knew I was capable of accepting Carol as a fully-realized person – flaws and all. Because what it revealed to me was something damning, and something particularly crushing to my sensitivities: that Carol is chronically late. 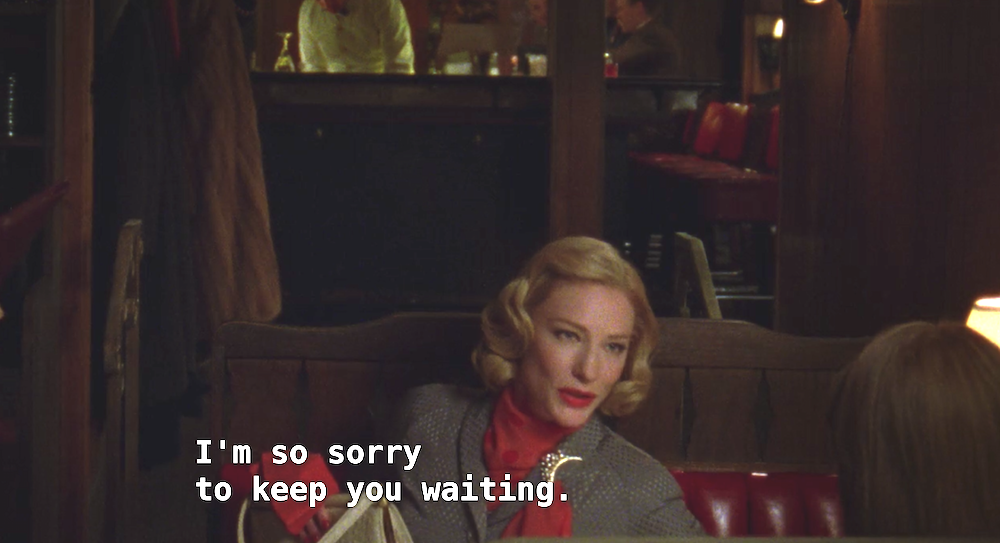 We know that Carol was late for Glove Lunch at Scotty’s. It’s not specified how late, but late enough for a nervous Therese to get inside, try and appear cool in the waiting area, and then give that up to watch out the window. What I didn’t know until recently was that Carol was also late for their second date. 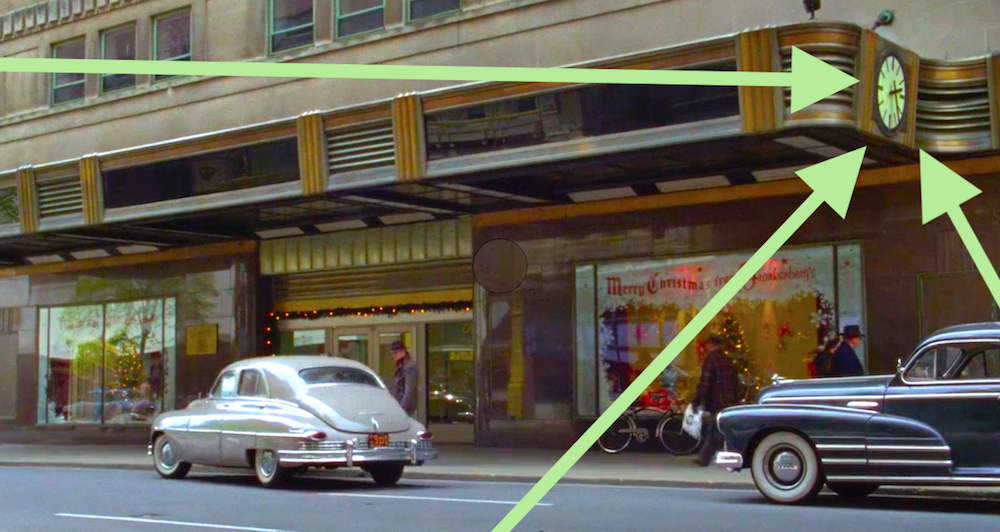 According to Therese’s planner for December 21st, the Sunday of Sundays, the agreed upon time for Carol to pick up Therese at the Frankenberg’s 7th Avenue entrance was 2pm. But according to this clock on the side of the building that I’d missed dozens of times, Carol didn’t arrive until 2:25pm. Ouch.

Not only does Carol show up 25 minutes late, Carol doesn’t apologize for it. She doesn’t even mention it! This is a move of someone who has folded being late into a part of themselves as gently as they would egg whites into a custard. C’est la vie; there is no other way. For a chronically late person to acknowledge and apologize every time they were late would be a round-the-clock task, and so rarely do they mention it. They have rationalized with themselves long, long ago that it’s fine and that being late is “a part of life” and “no one’s ever always on time” and they’ll get there when they get there.

It’s the same kind of misguided spirit behind seeing my reflection under airport lighting and convincing myself that it’s the mirror and that this is what everyone’s skin looks like and therefore no more attention to the matter is needed, for example more water please: it’s a bit of a yikes.

But of course that’s how it would be. Everything is on Carol’s terms, and so why not the time, too? Should have told her to wait indeed.