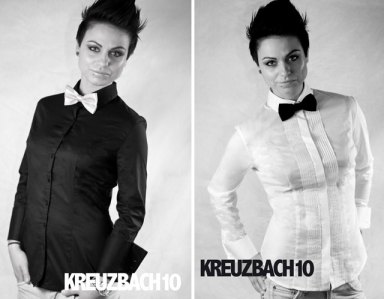 Back in November, Alex introduced you to the glory of Kreuzbach10 and encouraged you to support their indiegogo campaign, raving that “Anna Kunz, the very driven creator of this endeavor, is basically doing what I would do if I had the resources, time, or even remotely the amount of motivation that she does: masculine clothes that are made to fit women’s bodies.”

Anna got in touch with us about sponsoring some lucky human’s trip to A-Camp, in the spirit of our general camperships. But you will be the official Kreuzbach10 Camper and will be gifted a Kreuzbach10 shirt, bow tie and hat!

What are you writing about? Well, here’s Anna:

I strongly see Kreuzbach10 as being about empowerment and hope. The name ‘Kreuzbach10’ actually comes from the street name of my family home in Germany. When my father was young, he and his brother and parents were displaced and made refugees twice in political turmoil, losing everything but the clothes on their backs. There was a bit of a saga, but the short version is that they rocked up in this little village, had people treat them with kindness and generosity, worked their butts off, and built this whole new life from absolutely nothing at all. By the time I was a child visiting from Australia my grandmother was a fat old lady eating strudel. Their ability to come so far, from having so little is something that inspires me.

I guess it’s quite similar to what you in the USA would call the ‘American Dream’ but repackaged with my Australian-European slant on it. Many queers face obstacles, and some are even reduced to literally nothing in either the social/emotional/economic spheres, but my idealistic vision behind the label is that enabling them to feel good about their physical expression of themselves can create a flow on to other areas of their lives, its the shirt that gives you the courage to join a social group, ask someone out, sell yourself in a job interview… possibilities are endless.

So that’s what we’d like to hear from you — how feeling good about your physical expression of yourself gave you the courage to move forward in some area of your life. You need not express yourself as masculine-of-center in order to apply for this campership! Just speak from your heart.

If you grant us permission, we’ll publish the winning essay and two others on Autostraddle. If you’d rather not have your essay shared, that’s okay, we’ll ask you for permission first, and we’ll do that after Anna has made her decision so it won’t impact your chances.

So here’s what you do:

+ Anna will read your essays and we will inform the winner by March 1st, 2013.

+ Any candidates must be totally cool and maybe even enthusiastic about appearing on the Kreuzbach10 website with a photograph of you wearing your duds at camp with maybe a little paragraph about you.

+ If Riese is interested in publishing your essay on the website just for kicks, she’ll get in touch with you at some point in March.