In the Bay Area, queer and trans people of color (QTPOC) have managed to carve out communities, safe spaces, and even arts organizations, despite rapid gentrification that has made San Francisco the most expensive rental market in the country. But how inclusive are the spaces that have been created?

When asked if trans women of color (TWOC) are prioritized or given opportunities to tell their stories and share their experiences, Luna Merbruja simply laughs.

“Uh, no. Trans women of color are not included in radical spaces, period,” she said. “Queer people of color don’t really go to our spaces to hang out with us and their spaces don’t welcome us — so there is a divide. I always call it out. Something will be called a ‘QTPOC event’ but there are no trans women of color. They always want to talk about Marsha P. Johnson and Sylvia Rivera, but then no one who looks like that is ever there or running things.” 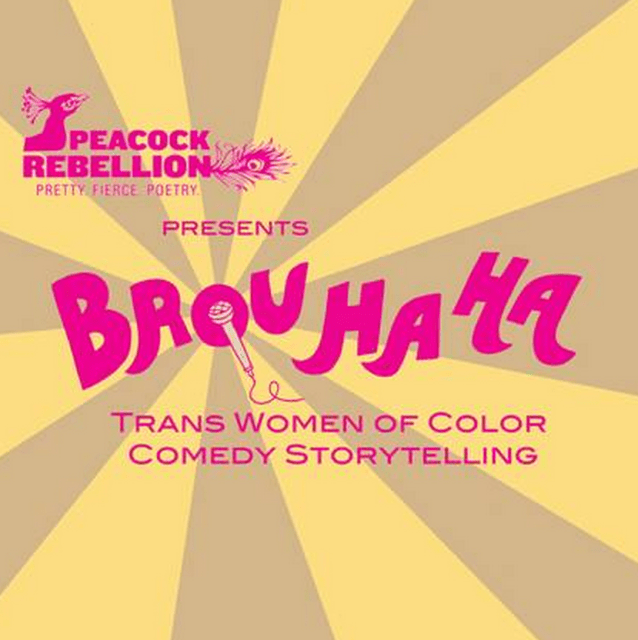 Merbruja an international performance artist and the author of Trauma Queen, a memoir documenting the struggles of being a child survivor of rape and abuse. She is also the lead trainer for Peacock Rebellion’s Brouhaha: Trans Women of Color Comedy Storytelling, the first ever comedy show in the nation – and perhaps the world? – with a lineup solely consisting of trans women of color. Part of the 18th Annual Nation Queer Arts Festival, the event will take place at the Oakland Asian Cultural Center on Tuesday, June 9th at 7 pm and 9 pm.

Merbruja says that a lot of radical spaces in the Bay Area are organized around language – acronyms like TWOC – but many don’t ID as trans despite sharing experiences with trans women of color. Also, much of the language used and topics discussed are academic, she says, which leaves out a large portion of the population that didn’t go to college or have access to that language.

Brouhaha, co-hosted by Merbruja and Brouhaha producer Lexi Adsit and featuring performances by Merbruja along with Jade Hambaro, Chella Coleman, Elena Rose, Star Amerasu, Erica Kane, and Janetta Johnson, will enable TWOC to tell their stories however they see fit, while also using comedy as a tool to step away from the narratives we usually hear about trans women of color.

“Usually when people hear our stories it’s about pain and death, but what about sex and dating and desirability? We experience trials and tribulations that are sometimes just like, funny stories that we tell. We never get to be uplifting or joyful or funny,” Merbruja says.

Which is why using comedy as an entry point for social justice isn’t as unusual as some may think. Merbruja asserts that comedy can be harmful and exploitative with trans women often the butt of the joke, but with trans women of color leading the way, Brouhaha is more about curanderismo, or healing of the body.

“I see this as laugh therapy; we’re finding positivity in things that can be painful to all of us. How many of us tell tragic ass stories to our friends and apply comedy as a habit?” Merbruja said. “Things can be disastrous, but they can also be hilarious. Comedy is an art form and within Brouhaha, it’s being used as a tool by trans women of color. I’m so tired of our stories being saturated in death and martyrdom. What’s lacking in the way our stories are told by the media is our joy. This is an entire show where we’re sharing laughter. That’s heart medicine.”

In essence, that’s the exact reason Manish Vaidya started Peacock Rebellion, the San Francisco Bay Area-based QTPOC arts group behind the production of last year’s Brouhaha: QTPOC Stand-Up Comedy and this year’s Brouhaha: Trans Women of Color Comedy Storytelling. Started in 2012, the organization is focused on “healing justice,” which Vaidya says is diametrically opposed to the way the “non-profit industrial complex” operates: “Privatizing and controlling social movements, replicating the behavior of corporations that don’t give a shit about people’s bodies and QTPOC bodies in particular.” As Merbruja has joked: In these environments, self-care becomes one more thing to put on your to-do list.

“My body is hella traumatized,” Vaidya said. “Healing is the revolution; healing is not something that happens after the revolution. Lexi and Luna had a moment when we realized that this show isn’t really about the audience; it’s about the women who are performing. They are artists holding and transforming trauma. I was worried that this was putting trans women of color in a position to perform for cis people, but comedy it’s more like creating an event where cis people have to shut the fuck up and listen to trans women of color for a change.”

Comedy or comedic storytelling, it turns out, is really great for processing trauma – and that’s something Vaidya is very familiar with, having grown up using comedy as both a tool and a coping mechanism.

“I’m Asian. I’m queer. I grew up cracking jokes to survive,” the organization’s founder and artistic director said. “I always wanted to do something with stand-up, but like tender, emo, raunchy snark for social justice, and I wanted it to involve QTPOC. With the training and support and weekly meetings provided by our trainers like Luna, I see Brouhaha as the start of an anti-MFA program for QTPOC who can’t afford debt.”

Vaidya readily admits that Peacock Rebellion is in no way perfect. Adsit, a TransLatina and the producer of Trans Women of Color Comedy Storytelling, previously dropped out of being a workshop participant in last year’s program. The artistic director says he made a lot of mistakes and the organization had to do a lot of work to challenge transmisogyny. The organization has recently undergone a makeover in an attempt to center trans women of color and support them in a real way. Peacock partnered with three organizations serving trans women of color (TGI Justice Project, El/La Para Trans Latinas, and Community United Against Violence, or CUAV) to develop this program; several of their members are in the show, and a portion of ticket sales goes back to their organizations. The producer, trainer, and many members of the production crew are trans women of color. The makeover extends beyond the program as well: Both Peacock’s board chair and the newest member of the organization’s Artistic Core are trans women of color, and more changes are on the way.

Adsit sees this year’s Brouhaha as a real opportunity to disrupt how cis people interact around trans issues, and this was very intentional. The producer says we’re at an interesting time in history and at this specific moment, more broad representations of the trans community are needed.

“There’s a real dichotomy between the trans women that people have become familiar with, women like Janet Mock and Laverne Cox and tragedies like what happened to Islan Nettles. There’s a whole, huge middle ground between the two. Brouhaha will shine a light on trans women of color who are not dead and who haven’t accelerated into mainstream consciousness,” the producer said.

The women participating in the event are different ages and ethnicities. They come from different backgrounds, have had diverse experiences, and according to Adsit, express gender differently. The producer says she and Merbruja have worked hard to cultivate, center, and help raise up the lives and experiences of trans women of color in their daily work. For Merbruja in particular, Brouhaha is important because of the visibility it provides.

“When I came to this project, I outlined my intentions and what I wanted was for trans women of color to be seen and valued,” she says. “I want them to feel like someone is listening and that they are given the space to speak their truth for five minutes without interruption, which doesn’t happen for TWOC often. My hope for the women who participate is that it helps build their confidence; that it makes them feel like they are more than a tragedy waiting to happen; that it’s OK just to tell a funny story.”