Boobs Tubers, hello! Before we dive into the week in TV, I just want to give you a quick heads up that we won’t publish a Boobs Tube column on Friday, June 7th because most of our staff will be at camp — but we’ll for sure be back the following Friday!

This week, a brand new To L and Back from Riese and Kristin! (Also the new L Word got a name.) Riese also brought together a team of trans and non-binary writers to talk about Lisa the Male-Identified Lesbian from season one. Valerie Anne recapped the Supergirl season finale and the Legends of Tomorrow season finale. Carmen reviewed season two of Vida and the Charmed season one finale. And Valerie wrote about the beautiful, tragic bisexual storyline in Lucifer’s second season.

+ Gentleman Jack has been renewed! — Heather

+ Remember how when Legacies ended on March 28th, and then how on March 29th I told you that you don’t have to watch The Vampire Diaries or The Originals to love Legacies? Well I still stand by that HOWEVER on March 31st my friend Nic and I started watching The Vampire Diaries and now today, less than two months later, we’re at the end of Season 5 of The Vampire Diaries and the end of Season 1 of The Originals (we’re alternating to try to keep it ~authentic~ #TVDFW) and I’m…obsessed?? I’ve never been so into vampire lore that wasn’t the Buffyverse, and I’ve never shipped so many m/f couples so hard, and I don’t remember the last time I loved a show with no canon queer lady couples for so many seasons (yet??? We’re still holding out hope. No pun intended.) So anyway I still stand by the fact that you don’t HAVE to watch these shows to appreciate Legacies, but I’m now amending it to say that maybe you SHOULD to enhance your experience and you have until probably October to do it, which two months ago I would have thought was impossible, but we’re on track to finish it in four months total, so you can, too! — Valerie Anne

+ It’s opening weekend on the new WNBA season and no matter how you consume your media, there’s a way for you to add WNBA games to your sports diet. Got cable? NBA TV has Indiana Fever vs. New York Liberty tonight, while CBS Sports has Chicago Sky vs. Minnesota Lynx tomorrow. Only have broadcast channels? ABC’s got a rematch of last year’s epic Western Conference Finals on Saturday. Are you strictly a streamer? You can watch two games this weekend on Twitter. See, there’s something for everyone! — Natalie

+ Did you see this first look at Pose Season Two? Because I can’t wait to see what happens in the ’90s for my beloved chosen QTPOC family. (It starts June 11th, get ready!) — Carmen

Gentleman Jack 105: “Let’s Have Another Look at Your Past Perfect” 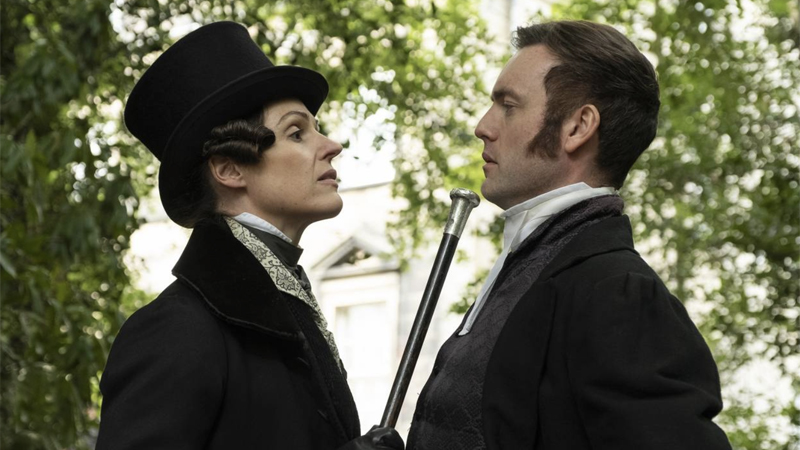 Anne’s fourth-wall breaking threat at the end of last week’s episode manifests itself in a glorious confrontation with the good reverend Thomas Ainsworth this week. He shows up at Crow’s Nest with proprietary love notes and scrapbooks and various other passive aggressive demands for Miss Walker’s hand in marriage. A week after his wife’s death, mind. Anne goads him into a one-on-one, during which she flicks his little clergy collar; waves her cane around in his face, tapping him on the chest with it at least once; and tells him to stay out of her line of sight, and Miss Walker’s life, forever.

For her part, Miss Walker is flipping back and forth like a goldfish — very much like real life, actually! — between accepting Anne’s marriage proposal and acquiescing to the demands of society and her family. Anne’s out here buying a Book of Common Prayer, for eight schillings, for them to use for their marriage sacrament; and ordering a wedding ring; and somehow walking with even more pep in her soft butch step than usual. In Anne’s absence, Miss Walker’s family convince her that: a) people are talking and b) she’s definitely going to hell if she keeps this lesbianism up.

Anne pleads with her to have courage, and recites one of the most famous lines from Lister’s real diaries: “I love and only love the fairer sex and thus, beloved by them in turn, my heart revolts from any other love than theirs.”

In the end, though, Miss Walker refuses her and Anne gets attacked by a goon sent from the Coal Brothers. It’s the least triumphant ending of any Gentleman Jack episode so far, but I have no doubt the rebound will be spectacular. 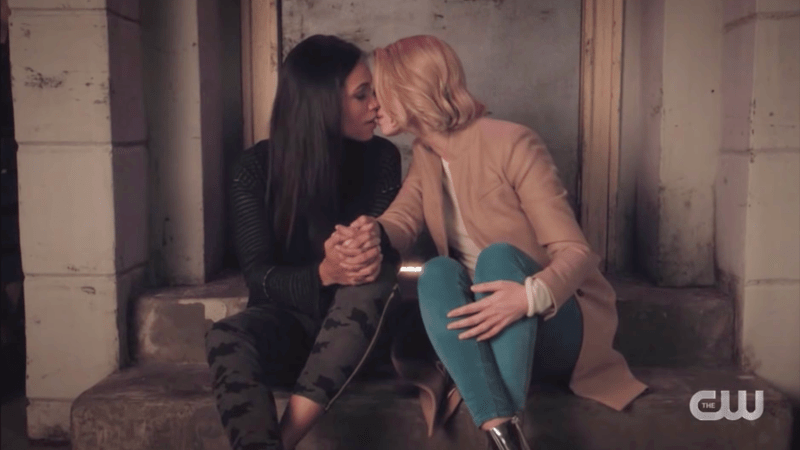 Petra and JR try a little co-parenting this week, preceded by a smash cut of the twins like they’re in The Shining in The Marbella, which is one of my favorite sight gags ever on this show. JR takes them for ice cream sundaes, alone, and they end up getting into a food fight and she snaps at them and Other Jane (lol) overhears the whole thing. JR thinks Other Jane dimes her out to Petra. She doesn’t, though, and so Petra ends up on her doorstep demanding to know why Jane minded her own businesses this one time in her life. Petra needs to know these things!

Petra and JR do a little snapping at each other and storming out, but ultimately end up on the stoop outside JR’s bar talking about how their own childhood trauma informed their idea of parenting. Petra spoils the twins because she didn’t have anything. JR didn’t have anything and finds the twins’ behavior entitled. They agree to keep working on it, and JR even uses Petra’s patented “don’t make me take your iPad” trick to get them to get dressed.

While she’s doing that, she gets a call from her mentor, who has a job for her, a law job, in Houston. Yikes! 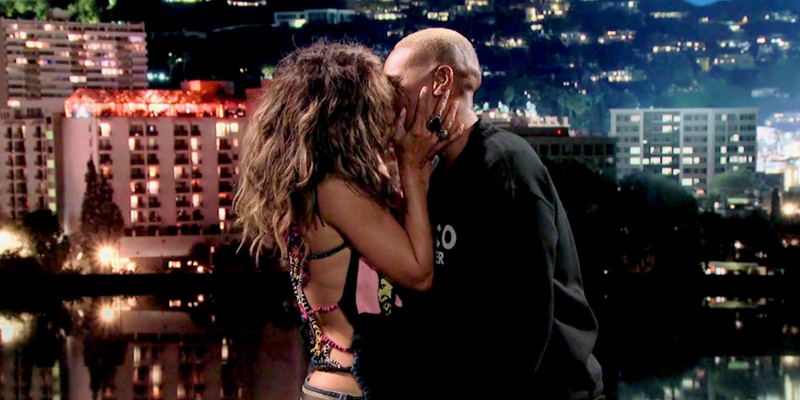 Today was a good day.

Do you believe in karma?

I would be hard pressed to find a celebrity who has done more for uplifting black lesbian visibility in the last two years than Lena Waithe. From her Emmy speeches, to MET Gala red carpets (x2!), to her willingness to help transform a historically homophobic black cable network – she’s the epitome of the saying, “when I enter a room, my community enters with me.” So maybe it’s only fair that she be the one to live out the dreams of millions of black lesbian, bisexual, and queer girls.

This week Lena guest hosted the ABC late night show Jimmy Kimmel Live! She opened her monologue joking “what you are watching right now is a girl from the South Side of Chicago living out her Arsenio Hall dreams” to a group of fans dog barking (the classic early ‘90s Arsenio cheer). But it’s when her good friend, and producing partner on BET’s Boomerang, Halle Berry comes to visit that my black queer corner of the internet went aflame.

Before the episode had even begun, Lena tweeted a GIF of her and Halle in a lip lock with a simple “No Caption Necessary.” Within 30 minutes, everyone I know had messaged me about it. The bit itself is pretty simple. The Kimmel studio has installed a “Berry Button” in case of hosting emergencies. Lena hits it, and Halle Berry – in full superhero pose – shows up behind a screen, then runs to her aid. Lena asks that Halle deliver a motivational speech, a slight parody of famous 2002 Oscar win. At the end of the speech Halle asks if she needs anything more.

Lena says “I think I’m good” and that’s when Halle Berry takes up a notch, holding Lena’s face by both hands and really laying one on her! We’re not talking about a quick puckered lip situation, either! OH NO, this is nearly a full on make out!!

By far the best part comes in the first seconds right after the kiss is over, when Lena Waithe – face stunned and jaw slacked – mouths “WOW.”

In that moment, I knew, somewhere in her past a 16-year-old Lena reached across the sands of time to give her adult self the most HIGHEST of high-fives.

(PS: Lena’s wearing the black queer owned STUZO Clothing. If you want her exact sweatshirt, you can get it here. I did the research because I love you.) 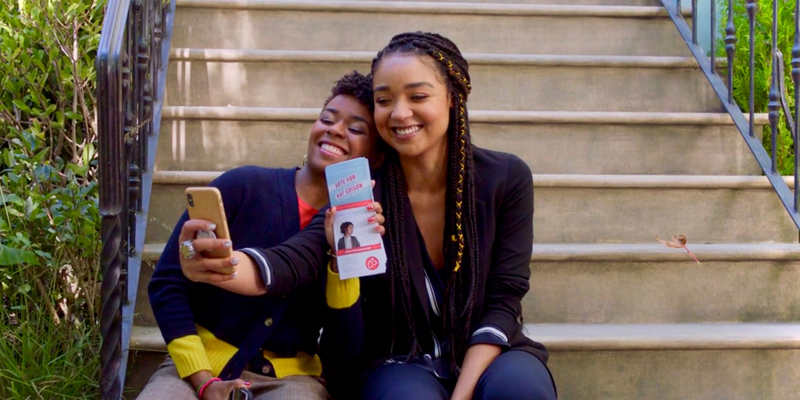 Kids this isn’t very factual to how election campaigns are run, but I don’t care! Look at those cute faces!

Last week I told you that I was an easy mark for two black girls in love, and that’s absolutely true. At the same time, I’ve had reservations about The Bold Type’s ability to appropriately grapple with the specific nuances of an authentic black relationship. This week went a long way to calm those fears.

Kat is completely head over heels for Tia. That tracks for Kat, who always leads with her heart first. So when going out canvassing for her election, it never occurs to her why Tia thinks they should split up. She just wants to spend more time with her girlfriend! It’s not until they encounter a racist white woman who accuses them of casing her apartment to steal (and also she’s going to call the police! A real BBQ Becky!) that things go awry.

Kat’s first reaction is to blow this woman up on her social media accounts, but Tia advocates for caution. Making the story public will only make it about the white woman, Kat’s messaging will get lost in the crossfire. The two end up in a pretty massive fight about the whole ordeal, but ultimately Tia’s right.

Kat apologizes. Thinking about race in these ways is still pretty new for her. Tia’s sympathetic; she’s been struggling with her own identity for years. She knowingly sighs, “Black and Gay?” Kat smiles, “It’s a one-two punch.”

That kind of understanding of double (or even triple) consciousness – what it means to see yourself as a black queer woman living in a country regulated by racism, sexism, and homophobia – is hard to pull off on something as lighthearted as The Bold Type, but the writers figured out how to thread the needle.

Then Tia and Kat have sex. They have full on, above the sheets, on camera sex. As always I give a lot of credit to Freeform for treating Kat’s sex life with the same seriousness that give her straight best friends. We’ve come a long way since Emily and Alison only got to rub ankles on Pretty Little Liars! But check this out – while Kat is busy making love to her new girlfriend for the first time, guess who just happens to text her? Oh that would none other than Adena El-Amin herself. She’s back in the country for a gallery opening, and she’d really love to meet up.

I actually have a lot of feelings about Kat’s third season arc! AND ADENA’S RETURN! So look forward to a standalone analysis piece about this very topic next week, right here on Autostraddle [dot] com!