Hello I am here to inform you that “The L Word reboot has a name? It is… “Generation Q.” Here’s the press release:

LOS ANGELES – May 22, 2019 – SHOWTIME has announced the official title of its highly anticipated sequel – THE L WORD: GENERATION Q, which will debut this fall on SHOWTIME. Marja-Lewis Ryan (The Four-Faced Liar, 6 Balloons) serves as showrunner and is executive producing with original series creator Ilene Chaiken and original series stars Jennifer Beals, Katherine Moennig and Leisha Hailey. Kristen Campo also serves as executive producer. The series is slated to begin production on eight new episodes in Los Angeles this summer. The pilot is directed by Steph Green who also serves as executive producer on the episode. For a look back at the original series, THE L WORD, go to:https://youtu.be/ZXYWSw2ZSR8.

The groundbreaking drama series originally ran on SHOWTIME from 2004-2009. In this sequel, Beals, Moennig and Hailey will resume their original roles alongside a new generation of diverse, self-possessed LGBTQIA characters experiencing love, heartbreak, sex, setbacks and success in L.A. The series sparked subsequent versions, including the docuseries The Real L Word and L Word Mississippi: Hate the Sin.

Also here’s some enticing art. I think I see a tiny Shane: 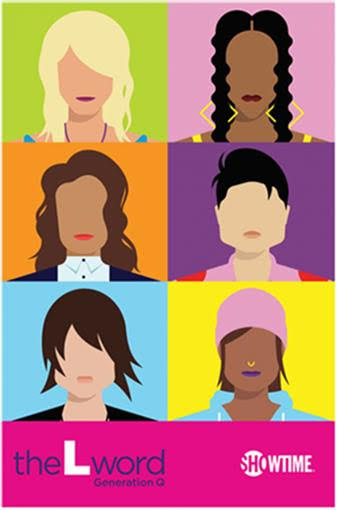 Other things called “Generation Q” include:

This is just to say that it’s a very crowded market and I look forward to seeing how this program will stand out in this very well-occupied media landscape.

Casting calls have already gone out for two trans male roles, one of which is for an Asian-American actor, as well as for a white female character identified as a “late 20s-early 30s former Olympic Swimmer” who is “charming, youthful and sweet.” She’s also supposed to be tall. I am also tall, but not that sweet, so that’s why I didn’t audition.

By the way, did you know that right this minute you could start listening to a podcast called “To L and Back,” in which I, a bonafide L Word expert, have been recapping every episode of the show you love to hate, The L Word, starting with Season One? I’m doing it with my pal Kristin Russo, who is the famous podcaster behind Buffering the Vampire Slayer! It’s has been a real hit so far! It’s a good thing to listen to as you prepare yourself for this show about people who don’t have any facial features. I can’t wait to love/hate it!!!!!