Welcome back to Boob(s On Your) Tube. I told you to watch Jane the Virgin, and I was right, wasn’t I? So right! Rosario Dawson made Petra gay! I also told you to watch Everything Sucks, which came out on Netflix today and you should do that also. Riese says it’s her new favorite show. (If you’re a ’90s kids you’re gonna love it.) I’ll have a review of the full first season for you on Monday.

This week Riese published a gentle guide for watching The L Word for the first time, and a review of The Girlfriend Experience. Carmen recapped another stunning episode of Black Lightning. Natalie wrote a love poem about Imposters. And I had a lot of thoughts and feelings about Lena Waithe finally showing up in the Ready Player One trailers. 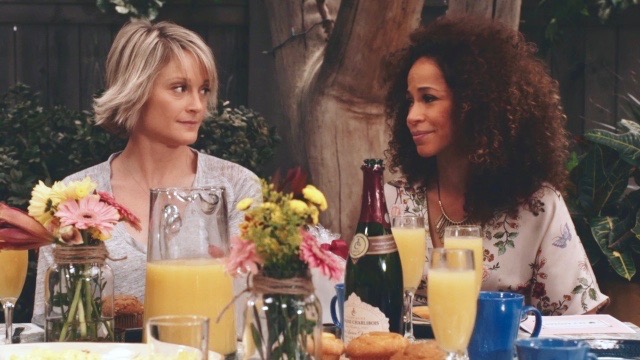 And they say two bottoms can’t make a marriage.

Stef’s talking to about her therapist about stress and also about Jenna and Tess. Her therapist picks up almost right away what’s at the root of Stef’s newest onset with anxiety; it’s uprooting old trauma about her own coming out, her history with Mike, and her parents. When she came out, she felt ashamed. Which, as her therapist points out, is different from feeling guilty. Guilt is the feeling of doing something wrong. Shame is the feeling of being something wrong. It’s a self-assault. That’s a hard, dark, resonant gay truth if I’ve ever heard one. That was first moment I cried this episode, but most certainly not the last.

Stef’s mom, Sharon, has come into town because it’s Mother’s Day and she’s ready to celebrate with her daughters and grandkids. She also catches back up with Tess while she’s there. Sharon’s delighted to find out Tess’ maybe a lesbian, and invites her out to a gay bar. The look of pure horror on Stef’s face! I don’t mean to find such joy in her mortification, but I am only human.

Mariana has also figured out that Tess is maybe gay, and in typical precocious Mariana fashion almost outs Tess to her son. But, Tess nips that in the bud immediately (she was actually pretty cruel about it, but since I am always on Team “never out someone against their will”, I am going to give her a pass). The situation allows Mariana to fit in this hilarious zinger though; she tells Lena that she would never “let my wife go to a gay bar with her first love, who’s in an exploring kind of mood”. I snorted.

The gay bar in question is hot, the music jams, and Sharon hooks Tess up with a cute woman to dance with. Anyway, Stef’s upset because Sharon is being supportive of Tess’ late-in-life coming out in ways that she never was with her own daughter.

Later, Sharon sees Stef taking her anti-anxiety meds, and they have an awful, raw, truth-bearing fight. The kind of fight that you have with your family when you can’t sweep it under the rug anymore. It’s painful, but there’s love, so it’s also healing. Stef begins having a panic attack right there in front of her mom, which I’m pretty sure is her worst fear. But, Sharon steps up to the plate and guides her through it. She tells Stef that her panic attacks are hereditary. Sharon started having them when she was about the age Stef is now. If Stef ever needs someone to talk to who understands, she’s there.

Oh! Remember when Callie and Ximena kissed in a church basement like two episodes ago? Because we here on the Autostraddle TV Team surely haven’t forgotten. This week, Ximena gave Callie a new necklace, which takes Callie on an emotional journey about mourning her mother’s death and saying goodbye. In the end, she replace’s her mother’s locket with Ximena’s necklace and smiles to herself. I’m very interested to see what builds for those two from here.

Jesús’ got a new learning aide, who’s also an attractive woman. His friends are making gross comments of her body. Jesús ups the ante on the verbal harassment by commenting that he’d focus better if “she sat on my face”. Mariana overhears him, is outraged, and tells Lena.

Jesús tries to excuse it away as “Guy Talk”. Lena’s furious, which leads to an excellent conversation with Stef and Sharon about raising feminist children, and explicitly raising feminist sons. This all ends with Jesús reading this speech as an apology to his moms at Mother’s Day Brunch, which I’m going to quote in its entirety, because honestly I cannot think of a better way to end this recap:

So, my moms saved me and my sister from more nights of despair. They gave us the one thing that we dreamed of, but didn’t dare actually hope for: Family. They made us feel safe, and for the first time in our young lives, loved. So loved. They made us feel like we worth something— like we mattered— like someone in the world wanted us. And I know that there’s nothing that I can ever give back to them that can equal what they’ve given to me; but I want my two strong, beautiful, brilliant moms to know that they don’t have to hope that I’ll be the man that they raised me to be. Because that’s the man I want to be. And I will always do my best to never let them down.

You are home with me. You’re right where you belong. 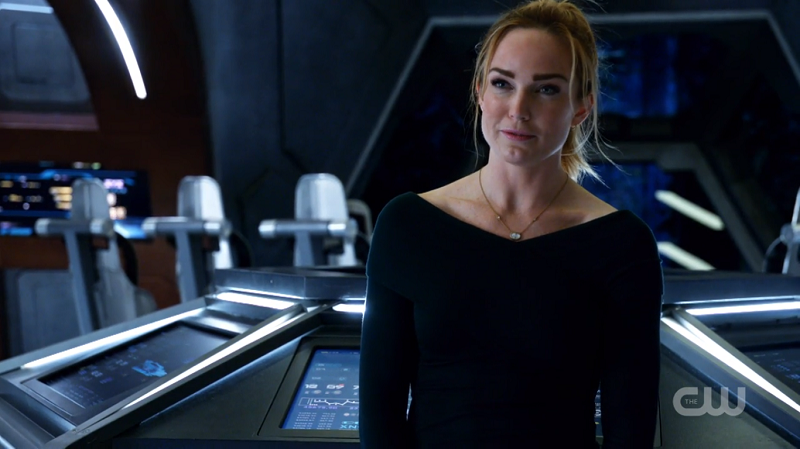 This hologram is giving me Casper vibes. Which is queer culture, obviously 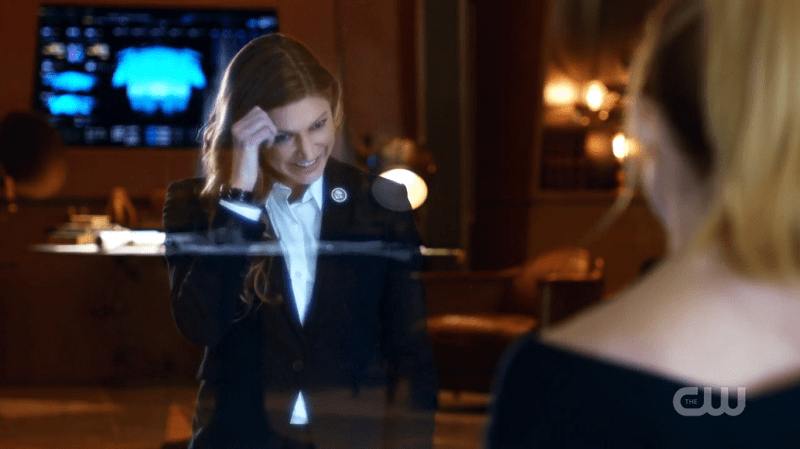 *imagines Sara pushing back her hair*

Legends of Tomorrow is officially back from hiatus, temporarily taking over Supergirl’s slot, and kicked off the back half of season three with plenty of badassery, a healthy balance of darkness and humor, and so. many. queers.

This episode saw the return of Constantine, who I feel indebted to because he plucked Sara Lance from her refrigerator with a nifty resurrection spell a few years ago. Constantine is basically like if Jack Harkness and Doctor Who had an exorcism-performing son, and he’s bisexual af, not unlike our fair Captain Lance. He hits on Leo (whose character and actor are both gay) and Amaya (who is also played by a queer person) in one fell swoop within minutes of arriving on the Waverider.

Sara and Constantine have a playful banter that I appreciate, and that helps me root them a bit when they eventually have a “shag” later to get some angst out of their systems while on a mission with Leo. (Also, the three queer characters went on a dangerous mission and all survived and the story was still great!)

But we’re not here to talk about them, we’re here to talk about Sara Lance and Ava Sharpe. Because in a beautiful turn of events, the chemistry we’ve been seeing on screen, the subtext we’ve been calling out to each other…it was called out ON THE SHOW. The first person on the AvaLance ship is Gideon, their literal ship, who teases Sara for calling Agent Sharpe “Ava” when she calls in. Next on the ship is Leo, who points out that Ava called Sara just to call her, none of the information she recounted actually warranted a hologram call. And at one point, Sara makes tough-as-nails Agent Ava Sharpe GIGGLE. Head down, hand-in-hair, full blush, GIGGLE.

Anyway, after the bi buds Constantine and Sara have a little romp in the hay, after Sara faces demons literal and figurative to save the day, and after Leo says goodbye so he can propose to his boyfriend, Sara decides to call Ava. Gideon teases her again, but Sara just calls her cheeky and ignores her. The hologram call proceeds to be the cutest thing – Sara loses her chill for half a second and tries to low-key ask Ava on a date, etc – until Ava interrupts and says Rip is missing and kills the mood.

It seems like they’re really going there, that this slow burn is going to play off, and that Sara’s settled down relationship we were promised might just be a lady after all. I’ll be giving you little updates here on Boob(s on Your) Tube as necessary, but I’m also planning to write a thesis on Sara Lance review of the season when it’s over. 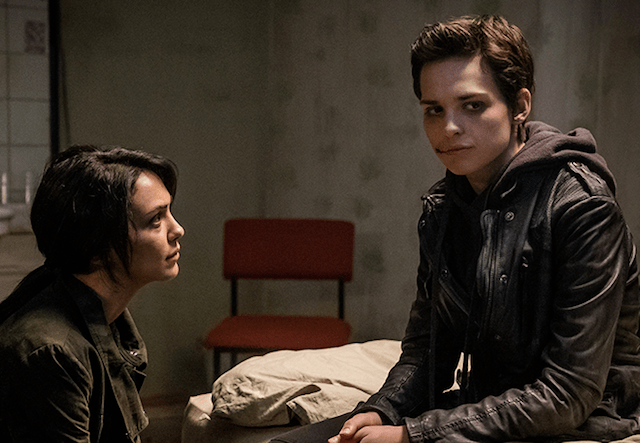 Starz’s Counterpart is a moody and twisty sci-fi thriller starring J.K. Simmons as Howard Silk, a cog in a United Nations office machine in Berlin. He’s pretty complacent regarding life in general, which includes his work, but then his wife is injured in a car accident and shortly hereafter he’s made aware that his agency is a crossing point to a parallel universe that diverged from his own during the Cold War. Baldwin is a lesbian from the other side who has lots of complicated feelings and is also a highly esteemed assassin — it’d been made relatively clear that Baldwin was gay from the jump, but this week actual sex happened, so it is my duty to inform you about this program. — Riese Bernard

I was going to a quick Boobs Tube write-up about how Michelle Yeoh’s Captain Philippa Georgiou had a threesome in the Disco finale, making her canonically bisexual, but I was 2,400 words into it when the Boobs Tube deadline hit today so I’m going to have to work that into a standalone article for next week. The good news is: BISEXUAL PHILIPPA and also WOMEN OVER 50 HAVING HOT SEX ON TEEVEE. But it’s a more complicated than that because this show did bury one gay already this season and kinda buried another one in the finale. The conversation deserves a little nuance, is what I am saying, so look for that next week. — Heather Hogan