From some of the first fairy tales whispered to us by our parents, we’re left with one indelible impression: happily ever after means having someone else with whom to share our lives. Before we can even form the words, before we can even grasp the concept, love becomes the thing that we aspire to most. The characters in those stories change over time — we imagine Princess Charming, most notably — and the scripts grow far more complicated, but that feeling, that desire, to love and be loved, persists. And when you’re queer and the not-so-distant past scandalizes your love, or worse, prohibits it entirely, believing and pursuing love isn’t just about fulfilling that desire, it’s a profound act of resistance.

It’s no wonder that so many of us come to love love… hell, we even gave it its very own day. We commit ourselves to its pursuit and we relish its depictions. We invest ourselves in characters — especially the ones that remind us of ourselves — and hope that they find love. You cheer for the romance. You hope for coupledom. You scorn the person who’d dare come between them. And where those depictions fail, we craft our own, turning subtext into text and longing looks into love.

Imposters is a show about love, sort of. It’s about the different ways in which we fall in love and what that love says about us as individuals. It’s about how love becomes the answer to questions that you never even thought to pose. Imposters shows you love through three prominent lenses and, though you’ll relate more to one than the other, you’ll see part of yourself in all three. 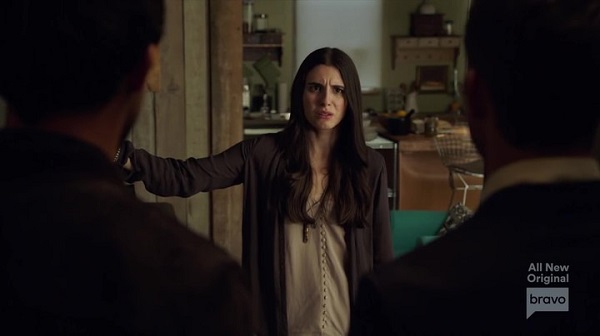 You are not the pizza I ordered.

Ezra Bloom (Rob Heaps) has been chasing the idea of a storybook romance for his entire life and when he finds it in Ava, he clings fast to it. Upon meeting her at a local French restaurant, he’s immediately smitten, drawn in my her beauty, charmed by her accent. For years he dreamt of living in Paris and becoming a writer but those dreams are supplanted by her, as if she was the thing that he’s always wanted. It’s no surprise that he marries her quickly — he loves love almost as much as he loves her — and that, as they ease into their life together, he showers her with daily anniversary gifts. The way that Ezra loves Ava: it’s the stuff we all dream about.

Richard “Richie” Evans (Parker Young) never saw love coming. He’d been an all-county quarterback, he’d become a partner at a car dealership and he had his choice of the local women; he was content. But one day, Alice, a Sarah Lawrence-educated belle of the Upper East Side, comes into the dealership and opens up his world. She shows him a world beyond that which he’s always known and, perhaps more importantly, she convinces him that he belongs in it. Alice crafts a plan for Richard’s future — from the dealership to the US Senate — and he believes her. Richard is his best self with Alice by his side and he falls in love with that fact, as much as he falls for her. They marry just four months after they meet.

Julia “Jules” Langmore (Marianne Rendón) was scared of love. From the moment she knew she preferred the company of women, she’s been scared. But then, she meets CeCe one night at a bar, and she’s just fearless, self-assured and uninhibited — everything Jules wants to be but isn’t — and Jules is drawn to her, like a moth to a flame. Jules can’t stop herself from loving her. Loving CeCe means Jules can’t be scared of any of the other things that’ve held her back her entire life. She can’t be scared of loving another woman or of showcasing her art or of telling her parents that she’s a lesbian anymore because it’s no longer the scariest possibility. Once you’ve tasted love, the scariest thing in the world is the prospect of losing it; everything else pales in comparison. 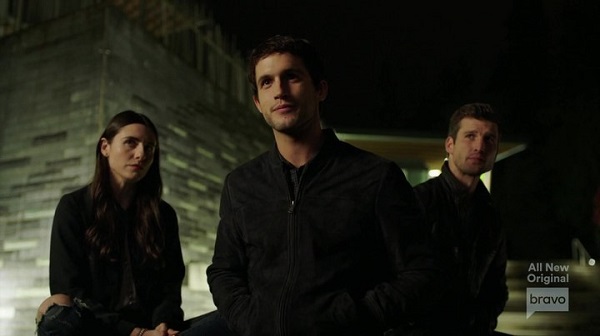 If this whole “get our money back from our con artist ex-wife” thing doesn’t pan out, we’re thinking of forming a band.

But here’s the thing: we love love — but sometimes it doesn’t love us back. Sometimes we’re meant to love infinitely and other times, it crashes and burns so spectacularly in front of us, we spend years cleaning up the refuse. It’s devastating; if love can transform us into our best selves, heartbreak can reveal our worst impulses.

Imposters is a show about love but ultimately, showcasing that is just a means to an end: you must understand the depth of their love to grasp the extent of their heartbreak. When Ava leaves Ezra, he tries to drown his sorrows, sate his craving for her by trying to get another woman to mimic her accent and, eventually, he tries to kill himself twice (failing both times). When Alice leaves Richie, he copes by sleeping with every woman that’ll give him a passing glance. When CeCe leaves Jules, her fears resurface, she’s forced into therapy and she stops creating new art. Each of them are devastated, individually, but the moment they discover that Ava is Alice and Alice is CeCe, their pain and their quest for vengeance becomes collective.

Ezra, Richie and Jules were never loved. They were conned, lured in by the same tantalizing grifter, Maddie Jonson (Inbar Lavi). She convinced each of them that they were special, got them to marry her and then robbed them of every single dime they had. She leaves them all with a video letter, explaining what’s happened and what they should do next, and a trove of blackmail material, meant to ensure that her marks never report her actions to the police or come searching for her. Alone the contents of their blackmail files might be enough to dissuade any one person from seeking Maddie out, but Ezra, Richie and Jules are stronger together, uniting to get their money back and closure. 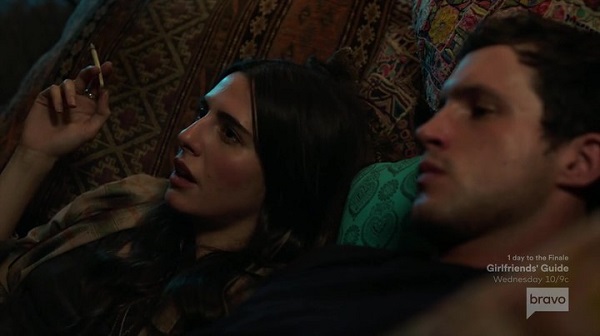 Maybe this will make more sense if we’re high.

“You know what all the con books say?” Ezra asks Jules, as they’re comtemplating how this could’ve happened. “For a successful con, you need a willing mark. We wanted every single lie she told us but I have to believe that someday, it’s going to catch up to her.”

As fanciful as its premise is, you never expect Imposters to resonate so much — or, at least, I didn’t — but it does because the themes of love and heartbreak are so universal. Maybe no one’s ever crafted a whole new identity to seduce you into marrying them, but we’ve all been conned in our relationship history, even if we don’t call it that. We’ve all met and fallen for someone only to wake up some days, weeks or months later, to discover that person has become a stranger.

“I don’t understand how someone can make you love them and then walk away like it was nothing,” Jules wonders aloud, echoing sentiments I’ve expressed after a few of my failed relationships. Love is universal and, it turns out, so is heartbreak.

Stepping into Jules’ marriage to CeCe — a quick elopement with none of their friends there to bear witness — feels like revisiting that first love that you have when you’re still in the closet. You’re in a bubble, where nothing else matters but you and her, and you savor every beautiful moment, never anticipating the moment when that bubble will burst. But it does burst, eventually, and you’re left to pick up the pieces, a prospect made all the more maddening by the moments that no one else can confirmed happened. 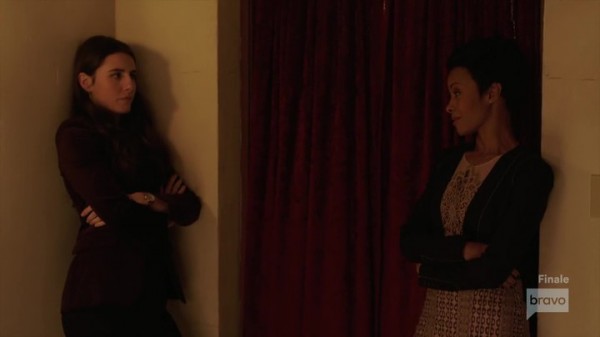 The only things keeping them apart are their secrets.

And later, when Jules meets Gina (Chastity Dotson), an immediate connection sparks between them. Flirty banter leads to a shared lunch which leads to a shared bed. But when Gina asks Jules for more, Jules can’t say yes, even when saying yes is all she wants to do. That reaction feels familiar because heartbreak doesn’t just leave you questioning who they were, it leaves you questioning yourself and your own judgement. How can you trust your feelings for this new person when the last time you felt like this you were so spectacularly wrong? You might not have had a grifter con you out of everything you had but that feeling, post-heartbreak, is universal.

Imposters is not without its shortcomings, though. In their annual guide on “Where We Are on TV,” GLAAD identifies three harmful tropes that are often used with respect to bisexual characters:

Imposters manages to hit all three. While you could chalk some of those tropes to being a side effect of the show’s overall premise, the presentation of Maddie’s sexuality leaves a lot to be desired. Imposters surprises the audience with the revelation that Maddie’s bisexual, using it as a tool to show exactly how villainous she can be, and then never grapples with her sexual identity again. Even when Jules gets her chance to confront Maddie, she doesn’t ask about it — an omission made even more glaring by how easily Jules summons her memories of CeCe. 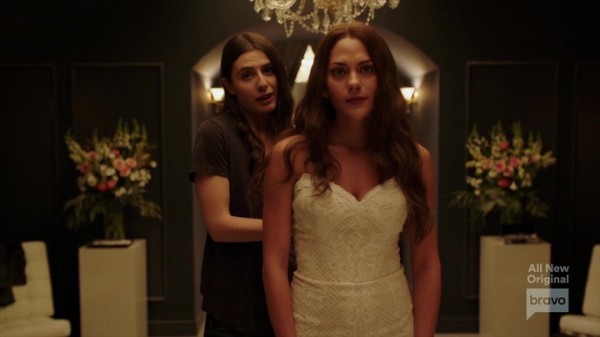 If you see your wife in a wedding dress but she’s marrying someone else, does it still count as bad luck?

Jules’ lesbianism is, on occasion, used as fodder for Richie’s jokes — an annoyance that will cause you to hate him for the first few episodes — but, ultimately, it’s treated with respect. There’s never a real suggestion that Jules will hook up with Ezra or Richie and the trio have more of a brother/sister vibe. Among the additions to the Imposters‘ cast for its upcoming second season, is Jules’ sister, Poppy Langmore (Rachel Skarsten), so we’ll get to learn more of Jules’ backstory and find out how much of her eccentricities existed, pre-CeCe.

It’s worth noting: Kathy Greenberg serves as consulting producer and writer for Imposters. Though it’s often left out of the story that’s told about The L Word, Greenberg was one of the show’s creators and helped write its first episodes. Watching Imposters, I wondered if Jules is who Jenny Schechter might have been, had Greenberg been allowed to remain with the show.

Bravo will re-air the entire first season of Imposters on Feb. 19 or you can watch it now, streaming on Netflix. The show returns for Season 2 on April 5 at @ 10 PM.

Join A+
Related:imposterslove is a lielove is sometimes not a lie