Every Friday (well, almost every Friday) when I sit down to write Boobs Tube, I feel this heavy sense of sadness and disappointment settle onto my shoulders. My first move is to try to disentangle the frustration I feel about queer lady TV being so bad this year from my terror about whatever the fuck the Trump administration has done during the week. That’s an impossible task. The takeaway is the same, though: Things just are not good right now for gay women on television. Supergirl is the bright spot, but even the beauty of Maggie and Alex gets cloudy from time-to-time by the relentless straight white guy entitlement and rewards that are showered down upon Mon-El on the regular (as Valerie Anne has written about brilliantly in her recaps, and especially in her analysis of the crossover musical episode).

Everything else is just kind of background noise. In ten episodes, The Good Fight only made one of its queer women into an actual character. The Fosters hardly even let Stef and Lena stand in the same room this season. Pretty Little Liars comes back for its final ten episodes next week, and all I can think about is how badly Ezra Fitz and the decision to make a duplicitous trans woman ruined a show I loved with all my whole heart. Orange Is the New Black comes back in just a few weeks but is that show actually going to recover from murdering Poussey? I don’t think so. And based on the response of our readers, I don’t think queer women are going to stick around to see if it can be repaired. (It can’t be repaired.) Plus: Where’s Luisa, man?

There’s Orphan Black. There’s Wynonna Earp. I’m hopeful for those! And I could always watch this season of Grace and Frankie again!

The main thing our community has been talking about this week re: TV is Zeke Smith getting outed as trans on Survivor. He wrote an op-ed about it in The Hollywood Reporter, which is really insightful and gracious and approved by Laverne Cox. The New York Times also wrote about what the show did between the time that episode was filmed and when it aired. GLAAD had a strategy at the ready that night; they helped shape the message.

I don't watch #Survivor but I love what you wrote here, @zekerchief your empathy & forgiveness. Debunking myths of trans folks as deceivers. https://t.co/1H0rGNiNRI

The only other real life queer news of interest is that the Television of Arts and Sciences Academy is letting nonbinary actor Kate Dillon choose which category they’ll submit in for the Emmy Awards for their work on Billions and Orange Is the New Black. And MTV is scrapping the gender-specific movie and TV award categories.

OH AND GINA RODRIGUEZ IS GOING TO PLAY CARMEN SANDIEGO.

Here’s what else on TV! 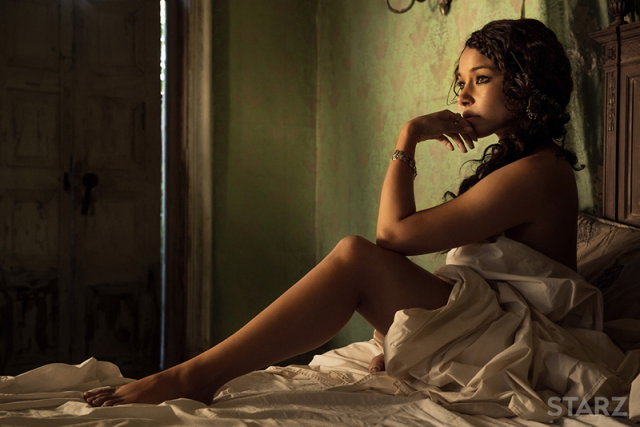 Remember when we thought we had nowhere to go but up from Glee?

Black Sails came close to being one of the best representation of queer characters on television. Everyone was bisexual! It was a dream come true! The three lead women, including a kickass woman of color, and the lead man were all unabashedly queer.

Then they had to go and kill their bisexual female lead for no reason. Worse, to further a man’s plot. Eleanor, once fierce and independent and a force to be reckoned with, over the course of one season, was diminished to “the Governor’s wife” and was killed by her own husband’s idiocy. Max never even got to say goodbye. It was heartbreaking and awful and unnecessary.

BUT at least all of our other queer characters got relatively happy endings.

Flint got reunited with the boyfriend he thought was long dead.

Max found her rightful place running Nassau, albeit from behind the scenes this time.

One thing that most pirate-history-lovers were likely excited about (myself included, since I have learned a lot about ladypirates over the course of this show) is that at the end of the episode, Jack Rackham invites a new aspiring pirate on board, who introduces themselves as “Mark Reade.” Anne eyes the newbie up and down, not knowing what we know: This is actually Mary Reade, her future galpal.

It was a good finale, it was. It wrapped everything up while still giving you hope for the futures of your favorites, with the perk of adding one more queer character in the eleventh hour. Even Idelle was at the new Governor’s right hand. My only wish, deep down to my bones, was that they had let Eleanor live. Eleanor and Max could have been running Nassau together, while Anne went off with Mary Reade. Everyone else got a relatively happy ending. But Eleanor, the fighter, the survivor, was killed in a fight with a wandering soldier. It felt like a betrayal, and frankly robbed us of what would surely have been some high-quality Hannah New acting in the final episodes, she who carried this show on her narrow but strong-as-shit shoulders for years. And I think what sucks almost as much as that feeling of betrayal is that feeling of “I should have known.”

But the thing is, this didn’t happen to any other main character on the show. Vane wasn’t killed in a random subplot isolated from everyone; he even got to say goodbye to the woman he loved. Billy Bones survived getting thrown overboard in the middle of the ocean…twice. So I had no reason, on paper, to assume a queer woman’s storyline would be thrown away like it too often is on other shows.

Today a coworker saw my “Support positive LGBT representation” sticker on my water bottle and asked me about it. After I gave him an incredibly shortened version of what it was about, and mentioned how a ridiculous number of LGBT characters were killed off shows in a short amount of time, he scoffed and said, “I guess no show is allowed to kill off their LGBT character or they’ll hear about it.” then literally got on a scooter and rolled away before I could rant about how THAT’S NOT WHAT I SAID.

Even if this was ten years from now and every show had a dozen queer characters so one dying on a show here and there wasn’t as egregious as every-show-unceremoniously-killing-one-of-their-maybe-two-queer-characters, or even in an alternate universe where everyone on every show was queer and heterosexuality didn’t even exist, I would still have had a problem with the way Eleanor Guthrie’s character was assassinated, both figuratively and literally. And it breaks my heart, because I loved this weird, beautiful, bloody pirate show.

All that said, it’s always sad to say goodbye. I’ll miss Eleanor, Max, and Anne, I’ll miss those beautiful oceans and stunning beaches. I’ll even miss that hauntingly beautiful opening sequence. For the most part, Black Sails celebrated the strength and genius of women fighting for their rightful place of power in a world that wished to grant them none. It showed the rise of women who had been beaten down by men who felt threatened by them or entitled to them. And at its heart, it was about the relationship those women had; sometimes as lovers, sometimes as friends, sometimes as a (finally) worthy adversary.

So goodbye, Black Sails. May Eleanor Guthrie, Anne Bonny, and Max, the woman who loved them both, live on forever in our hearts. 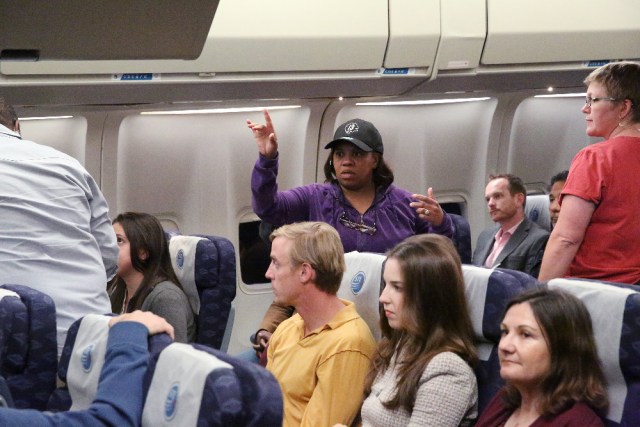 Hands up if you remember that Black women tried to save this country from Donald Trump.

There’s nothing gay to report about the last few episodes of Grey’s Anatomy, but there is something special to report and that’s: Chandra Wilson and Ellen Pompeo directed two of the last three episodes and they were both brilliant and nowhere else on TV do women get opportunities like this. It’s Shondaland only. Pompeo did “Be Still, My Soul” and it’s one of the most gut-wrenching episodes in Grey’s history (which, as you know, is saying something) and it’s so fitting that the woman who plays the eternally tortured Meredith Grey would pull the strings on the episode where Maggie loses her mom to breast cancer. Pompeo does so much without words in this episodes, gets in on Maggie’s face, doesn’t even close Maggie’s mom’s eyes after she passes away, and pulls out with an aerial shot that’s actually heavenly in the end. She’ll be directing another one in season 13.

Wilson got the Riggs/Mer bottle episode on a plane and directed it with such claustrophobic precision it came closer to giving me a panic attack than that episode in season one when Meredith stuck her hand inside that dude’s chest because there was a bomb in there. You know as well as I do that Grey’s isn’t much for subtlety when it comes to its metaphors but the turbulence of Riggs and Meredith juxtaposed with the literal turbulence of that plane were brilliantly executed. I felt like the world was squeezing in on me. I was terrified. I hadn’t realized Wilson also directed The Fosters this year! I like that. I like that a lot. Oh, and shout out to the pilot who got all the passengers safely through the storms converging on the plane in “In the Air Tonight”; she was a woman.

Between these two episodes of flawless direction by some of the hardest working women in Hollywood, we got an episode where Mer and her sestras danced. A beautiful throwback. Joy in the storm. Shonda just keeps on doing us right. 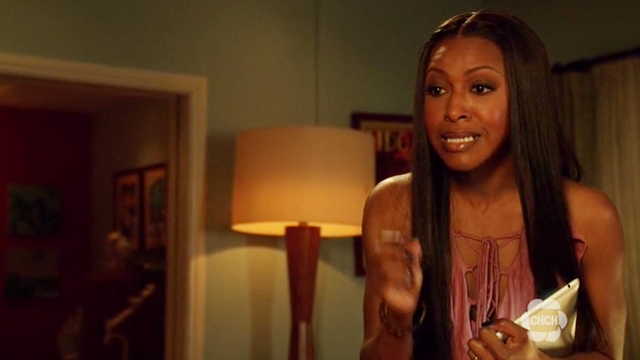 The Last Jedi Poster makes my heart feel like it’s on literal fire. 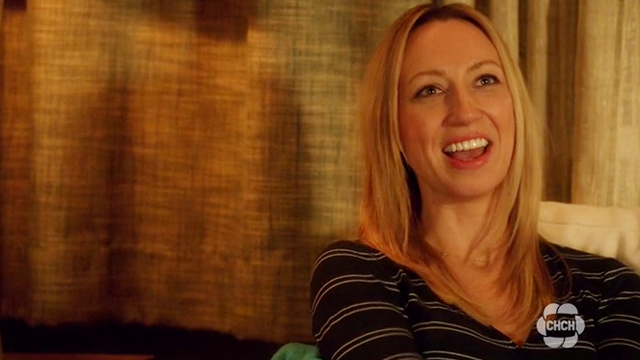 Nothing gay, but here are some cute looks between Pippy and TMI when Pippy goes full caretaker before and during Rosie’s liver surgery. (His body explodes on the table but I think he’s going to be okay. There’s still like six episodes left this season.)