Time for another installment of Autostraddle: Behind the Scenes! Today we bring you “AfterTess” or “Team Meeting” (alternate title to avoid Tess freaking out about being in the title). In this episode; Autostraddle CEO Riese, Design Director A;ex, COO Brooke and our friend actress Haviland Stillwell, along with our friends Rocco and Rachel of Wingspan Pictures, finally meet Tess, our web developer/manager/programmer/leader person. Because she lives in Chicago and we live in New York, we all ended up in Los Angeles. That doesn’t make much sense you know, but it’s okay! 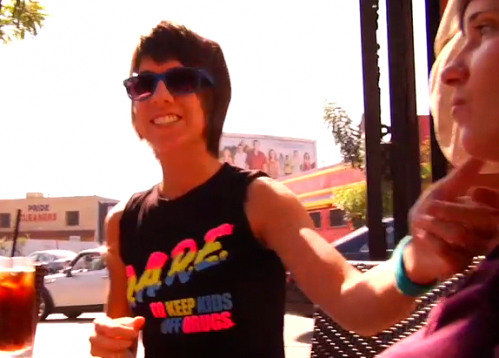 Skip this part describing the Behind the Scenes project if you’ve read it already:

See, our friends Rocco and Rachel own a production company and thought it would be neat to film us while we were in Los Angeles. Riese and Tess both objected vehemently to the idea of being on video ever/all the time, so as much as “Autostraddle Behind the Scenes” is about what happens “behind the scenes” of Autostraddle, it’s also about what happens when you keep filming people who hate being filmed [Riese sidenote: if this confuses you b/c of the R&H Vlogs, she’ll be happy to explain to you why that’s different, and also how that ended up happening in the first place]. It’s like the opposite of Gimme Sugar!

So are you ready to hear why Tess got fired from Hooters and see Haviland in some cute plaid shorts? YEAH YOU ARE! [Also special note for The Feds: everything we say that might be scandalous is actually just us jk’ing.]

If you’ve missed the first three episodes, you should begin with the very first one — Autostraddle Behind the Scenes #1: TRACK STOP.

You can watch all our Behind-the-Scenes Videos here on Autostraddle.