LADY GAGA: Depending on your time zone, Lady Gaga either already has appeared or will appear on Ellen today, and it was per ushe, amazing!  In her interview, Lady Gaga told Ellen: 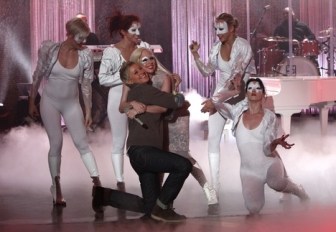 “I didn’t fit in in high school and I felt like a freak. So I like to create this atmosphere for my fans where they feel like they have a freak in me to hang out with and they don’t feel alone.”

“The whole point of what I do – The Monster Ball, the music, the performance aspect of it – I want to create a space for my fans where they can feel free and they can celebrate,” the singer, 23, says.

That’s why we love her too, and perhaps why gays relate to her so much regardless of her bisexuality, really, is that outsider mentality — that queer sensibility, that constant itch of being “different” and not like anyone else.

It’s Black Friday and Amazon is giving you The Fame Monster for FIVE FREAKING DOLLARS. Yup that’s it. Check out other $5 Black Friday Albums here.

Also, Gaga is offering Fame Monster tickets to fans who volunteer at Homeless Youth Agencies over the Holidays. Payin’ it forward, that’s why we love this woman.

LINDSAY LOHAN: Lindsay Lohan had a fantastic Thanksgiving. She ate a lot of food and tweeted baby photos!

JERSERY SHORE: UNICO, an Italian-American service organization has asked MTV to pull Jersey Shore “because it perpetuates the stereotype of young Italian men as mindless drunk oafs with more hair gel than brain cells.” (the quote is from New York Magazine, not UNICO) (@nymag)

GRAMMYS: Will the Grammys Bend Their Rules to Accommodate Top Talent From AMAs?: If they want to get the big ratings that the American Music Awards did, they just might have to. The rules that we’re referring to have to deal with NARAS’s longstanding policy of not letting acts that perform on the AMAs also do their thing on the Grammys. (@nymag)

OOOPS: From Kanye’s VMA dis to Christian Bale’s outburst, see which stars took the biggest stumble under the spotlight in ’09. (@people)

ADAM LAMBERT: This is why The New York Times exists: to approach controversial mis-handled issues with calm, precise logic, like how it looks at the importance of context for the Community Standard or Double Standard – “It wasn’t the best musical performance by any means, but it wasn’t the worst display of sexual debauchery either. Mostly it was a reminder of television’s policy regarding gay men: Do tell, just don’t show.” (@nytimes)

And Queerty says: “Know what’s getting lost in all this talk about Adam Lambert’s “controversy”? The fact that the record is actually quite good!” On Sirius radio he talks about “sheet drag” and other things. Here’s a clip of him talking about his “inner fat girl.”

Also, apologies for the Lambert/Gaga overload this week — with everything they’ve got going on with their new albums and the American Music Awards, it’s kinda hard to find anything about anyone else! And we love them!