I’m sure you’ll all tune in to see Anderson Cooper do this story right on CNN tonight, but in the meantime Queerty invites you to meet Jo-vanni Roman, Escort to America’s Leading Hypocritical Bigot George Alan Rekers: “Jo-vanni Roman, a 20-year-old Miami resident and sometime-escort, has gone from being an unknown private citizen (circa last weekend) to public figure (circa Tuesday). After being photographed at an airport returning from a 10-day European trip with leading anti-gay bigot George Alan Rekers, Roman finds himself in the center of a scandal involving the Family Research Council/Focus on the Family, Florida attorney general (and GOP gubernatorial candidate) Bill McCollum, and if you want to stretch things, even Maggie Gallagher.”

Since we last reported on this event two days ago, a ton of predictable things have happened; namely that it’s even more obvi than it was that George did not hire Roman to “lift his luggage.”

Rentboy-Hiring Homophobe George Rekers Urges Hired Escort to Keep Quiet
Gawker has more on the scandal, including the phone conversations the Miami New Times overheard between Rekers and the escort:

“Sometimes I feel like I should just tell (the press) what happened on the trip.”

“No,” said Rekers quickly, “Please don’t do that. Please don’t let them pressure you into it.”

Too late, he already did! Luckily, Rekers has his defense all planned out:

“You have to understand,” Rekers explained, “I’m a doctor. It’s my business to understand this plague of homosexuality in order to know how to properly treat it. I needed to explore the psyche of a real live gay and witness first-hand what the lifestyle is all about so I could finally find the cure.”

The rubdowns, we assume, were also part of the research? I want that job!

As we discussed in Evangelicals, Rapists, Tramps & Thieves, this is no uncommon circumstance — it seems the more anti-gay the leader, the more likely the leader is secretly gay: 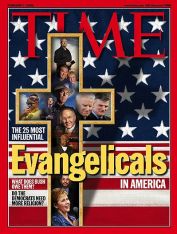 1980s: Lonnie Frisbee, an American Pentecostal evangelist and a key figure in the “Jesus Movement,” socialized privately as a gay man but preached and said in interviews that homosexuality is a sin in the eyes of God.

2000: John Paulk, face of the ex-gay movement, was fired from Exodus International after being caught at gay bars with gay dudes 100 too many times.

2004: Paul Franklin Crouch, the co-founder, chairman and president of the Trinity Broadcasting Network, the world’s largest Christian Television network, paid a $425,000 formal settlement to end a sexual harassment lawsuit from a man who claimed to have been involved in a homosexual tryst with Crouch in 1996.

2006: Ted Haggard. You know this one. A viciously anti-gay evangelical megachurch leader, the male escort he’d been riding the hobby horse with for several months saw Haggard talking shit on the TV and turned him in as a secret gay. Haggard now says he suffers from “same-sex attraction” but is happy with his wife. He’s also stopped talking shit about gay people. Mostly.

2006: The Reverend Dr. Lonnie Latham, senior pastor of South Tulsa Baptist Church and a member of the executive committee of the Southern Baptist Convention, was arrested for lewdness when he propositioned a male plainclothes police officer for oral sex in an area notorious for cruising and male prostitution.

2006: Republican congressman Mark Foley, an advocate of abstinence and stricter child pornography laws, resigned from the U.S. Congress after getting caught sending sexy e-mails to a male congressional pages.

June 2009: “Ex-gay” evangelist Matthew C. Manning was “rescued” from being a homo in ‘89. But since then, he’s been banned from his gym for lewdness and arrested for public sex at least three times since 1998.

You can now add a few more to the list, courtesy of The Miami New Times Top Ten Anti-Gay Gay People:

Bob Allen, Republican member of Florida House of Representatives, was against adoption by same-sex couples. Also he solicited prostitution from an undercover male cop.

Roy Ashburn, Republican California State Senator. This is the guy that voted against us, and then when he was caught with his male lover, took the high road and just came out. Cheers!

Edward L. Schrock, Virginia Congressman. This advocate of DADT was caught on tape soliciting sex from a male prostitute.

Larry Craig, U.S. Senator from Idaho: You know this one. Solicited sex in an airport bathroom from an undercover cop, but voted twice against same-sex marriage and hate crime protections for teh gays.

Have you seen Outrage, btw? You should. Oddly, this reminded me of a passage from Chely Wright’s new book Like Me, in which she describes an incident where she told a gay castmate at Opryland that she didn’t approve of his lifestyle and was offended to see him flirt with another man in front of her. She later found out that he went easy on her because he suspected she was gay and understood her words came from self-hatred:

I suppose that my hateful rant against homosexuality in those first few weeks at Opryland only fueled his speculation about me. As I have grown older, I have paid attention to those who are so overtly opposed to and vocal against homosexuality, especially those who prop up their arguments with the Bible. An educated guess tells me that some of them who rant are actually gay.

DOMA:
Case is made vs. US marriage law: This is widely considered the first challenge to the Defense of Marriage Act, and it happened yesterday when a lawyer for 17 gays & lesbians who’d legally wed in Massachusetts urged a federal judge yesterday to strike down the 1996 federal law that defines marriage as a union exclusively between a man and a woman. They say it’s unconstitutional and that these legally married couples in Massachusetts were ineligible for federal benefits, which is obvs totally unfair.

W. Scott Simpson, a Justice Department lawyer defending the government, countered that the Obama administration agrees that the federal law is discriminatory and supports its repeal. But Simpson said the department is obliged to follow the longstanding practice of defending federal laws signed by previous presidents as long as the statutes are constitutional, which, he contends, the Defense of Marriage Act is.

The kids at Marquette are pissed that the school has rescinded its offer to crown a lesbian as the new dean for the College of Arts and Sciences. The lesbian in question has “written scholarly works on gender and sexual orientation” and also stuff “relating to Catholic mission and identity.” (@jsonline)

New York State’s highest court kinda expanded the rights of gay & lesbian parents, just barely ruling that nonbiological parents in same-sex relationships should be treated just like biological parents. But the Court of Appeals has declined to resolve two cases involving lesbian parents and sent ’em back to the lower courts instead for reasons we really don’t understand. (@nytimes)

The House of Deputies in Argentina passed same-sex marriage by a 129-105 vote. If the Senate also passes it, the president has promised she won’t veto it, and then all the hot girls in Buenos Aires can marry each other! (@san diego times)