Because we delusionally or self-indulgently believe that anyone who dedicates their lives to condemning, shaming, and eliminating the rights of homosexual people must be motivated by some serious self-hatred (Because really how much can you possibly hate someone who’s never harmed you or anyone you know? Self-hate is far more likely.); we are not totally surprised to see that George Alan Rekers hired a male escort from rentboy.com for a ten-day European vacation.

George Alan Rekers, a Baptist minister and leading scholar for the Christian right, formed the Family Research Council (a D.C. based anti-gay evangelical Christian lobbying group who sets the tone for America’s far right-wing) with James Dobson, “America’s best-known homophobe” in 1983.  (Dobson’s sins, as well as those of many others like him, are detailed in our piece Evangelicals, Rapists, Tramps & Thieves: Why Anti-Gay Leaders Love to Sin, Are the Sinners).

George Alan Rekers is an officer of NARTH, the National Association for Research & Therapy of Homosexuality.

Rekers has been an advisor to the Department of Health and Human Services and served as a Harvard University research fellow and a professor of neuropsychiatry at USC. From The New Times:

…much of Rekers’s activism over the past three decades — beginning with his 1983 book, Shaping Your Child’s Sexual Identity — has been devoted to improving children’s lives by educating them, protecting them from their own budding sexualities, and keeping them safe from gay adoptions — as he did by testifying as an expert witness in favor of gay adoption bans in both Arkansas and Florida.

How does Rekers explain his reportedly delightful vacation?

Reached by New Times before a trip to Bermuda, Rekers said he learned Lucien was a prostitute only midway through their vacation. “I had surgery,” Rekers said, “and I can’t lift luggage. That’s why I hired him.” (Medical problems didn’t stop him from pushing the tottering baggage cart through MIA.)

He claims that he was unaware that his companion, dubbed “Lucien” by The Miami New Times, was “in that line of work” until a few days into the trip.

At the small western Miami townhome he shares with a roommate, a nervous Lucien expressed surprise when we told him that Rekers denied knowing about his line of work from the beginning. “He should’ve been able to tell you that,” he said, fidgeting and fixing his eyes on his knees. “But that’s up to him.”

The New Times details why it would’ve been impossible for Rekers to find his rentboy via any other avenue besides rentboy itself, which requires its users to acknowledge they are not offended by graphic sexual material before entering the site. It’s a pretty bizarre and interesting story. Check it out.

Lily Tomlin Could’ve Made This Whole Business of Coming Out on Magazines So Passe. In 1975. (@queerty)

10 THINGS YOU SHOULD NEVER SAY TO A LESBIAN:

The good ol’ boys at Asylum (“FOR ALL MANKIND”) got an actual lesbian to give them tips on what you should never say to a lesbian, such as:

8. “Lesbians can’t have sex.” Oh yeah? You just keep telling yourself that, if it makes you feel better

Clutch analyzes the bisexuality in this Usher and Nick Minaj video:

Have  you ever wondered why breasts are such a big deal? Yeah, you probably haven’t questioned it, but anyway here’s a pretty scientific breakdown of why (based on the straight male perspective, sub out pronouns as needed). (@psychologytoday)

Mother’s Day is this weekend, don’t say we didn’t remind you! Change.org would like to take this opportunity to remind us all of what we owe our feminist, lesbian and activist mothers (using the term loosely as well as literally, here).

Oh speaking of Mother’s Day, have you heard about this movie, Babies? I’m pretty effing excited about it because it combines the cuteness of kids that I don’t have to care for with the awesomeness of sociological lessons and the promise of universal truth! It comes out on Friday, maybe you should take your mom. (@USAToday)

A gay police officer in the UK arrested a priest for calling homosexuality a sin, which can be considered hate speech there. Cops maintained his comments about gays were made loudly enough to be heard by other passersby in the area. “I felt deeply shocked and humiliated that I had been arrested in my own town and treated like a common criminal in front of people I know,” McAlpine told the Telegraph.

Too bad that guy felt humiliated. I’m sure a gay person never felt bad after being called sinful, though. (@nydailynews)

The Washington Blade may be back, but the Chicago Free Press is gone. The Free Press, an 11-year-old gay-focused weekly magazine, abruptly quit publication this week due to the publisher’s health problems. (@chicagotribune)

COME OUT COME OUT:

With all these people coming out recently on the covers of People and Curve, Queerty asks but what about the magazines? (@queerty)

What’s up with the iPad ads being so gendered? Double X is getting tired of all this binary crap: With the iPad, it seems like we will definitely need more than one because the new Apple product performs different functions for boys and girls—or at least that’s what the iPad’s ad campaign would have you believe. ...In the ads featuring a male using the iPad, he is always shown reading the New York Times or Wall Street Journal, while the ads with female users always show her organizing picture albums or reading Nicholas Sparks’ The Last Song. (@slate) 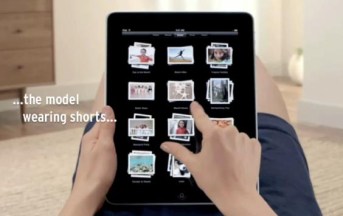 I’m pretty tired of the binary, too, FTR. I tried to buy a birthday card yesterday, and the story only had his or hers options. We can’t just wish a PERSON happy birthday anymore? ‘Cause I think a card with a cute puppy on the front is an equal opportunity pleaser.