I’ve been watching a lot of horror movies lately, and whenever there’s a queer character who meets the same violent end as the rest of the characters in the movie, I find myself thinking, “Well, it was nice to be included.” Same goes for Monsterland.

While it never feels great to watch queer characters be attacked or beaten or haunted or murdered in horror/thriller/slasher movies or TV shows, when it’s happening to literally everyone, because that’s the premise of the thing, it feels, ironically, more like we’re being treated well. So it’s sometimes hard to know if it’s “good” representation or not. It’s hard to parse out of they’re being treated better or worse than other non-queer characters in the story, because on one hand it’s great that they were included at all, on the other it doesn’t feel great to watch yet another lesbian die. Or another lesbian be portrayed as “crazy” or have the line between queer romance and scary obsession blurred.

All this to say, I’m going to tell you about the queer bits in Monsterland, but don’t expect it to be all sunshine and roses.

Monsterland is a horror anthology that is similar in structure to Black Mirror, but instead of technology being the vehicle of the metaphor for the worst of humanity, it’s sci-fi monsters. Some metaphors are more on the nose than others, some are like a magic eye poster that you can see if you squint but if you look at it too closely it won’t make any sense. There are plenty of classic horror movie tropes, a fun way to portray an online chat without making you read too much, and plenty of body horror. Some episodes were great as an hour-long episode of television, some should have been movies or series of their own because they needed more room to stretch out, some missed the mark entirely for me. But all were the kind of tense, spooky, twisted story worthy of an October binge. Also, every episode had an actor I recognized in it, which turned out to be a fun surprise every time.

Oh also, this show requires all of the trigger warnings. If you have any kind of triggers, this will trigger it. Everything from real life triggers to any supernatural phobias you have like perhaps people peeling their whole face off or someone’s entire eyeball falling out of their skull.

I’m here to discuss two episodes in particular, and I’m going out of order because the second in consecutive order is more blurry re: queerness than the first.

Episode 7 is called “Iron River, Michigan” and focuses around a girl named Lauren in two different time periods, as a teenager and as an adult. It’s one of those obsessed-with-my-best-friend stories that is true to queerness but also sometimes portrayed as creepy. No one seems to actually identify as queer in the story, though there are heavy hints of it; though also it’s unclear what exactly is true and what isn’t, because of the unreliable narrator(s) in this story. That said, Kelly Marie Tran is fantastic in this episode, even if it’s not winning any awards for great queer representation.

Episode 5 is really the one we’re here to talk about, called “Plainfield, Illinois,” and centering around two lawyers in love named Shawn and Kate, played by Roberta Colindrez (Vida) and Taylor Schilling (OITNB). 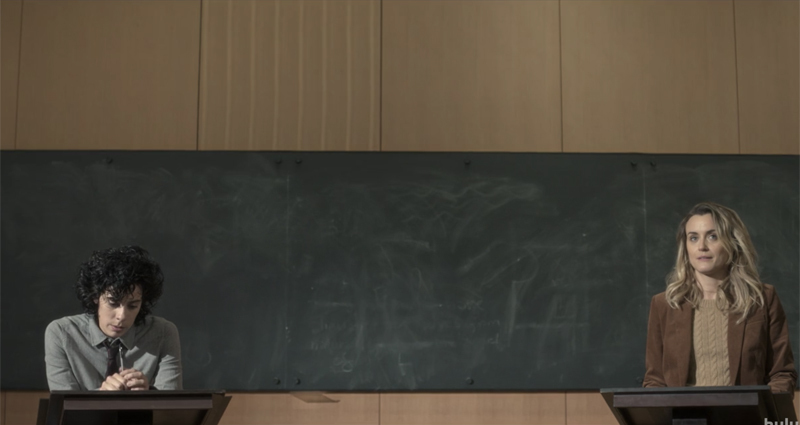 At first it seems fun and exciting, and I’m hoping they get to battle a monster together, using their sharp wit to their advantage, but as the episode crept on and Kate starts talking about her bipolar disorder as a “thing inside” her that is mean and scary… I realized that unfortunately, this was about to take a turn. 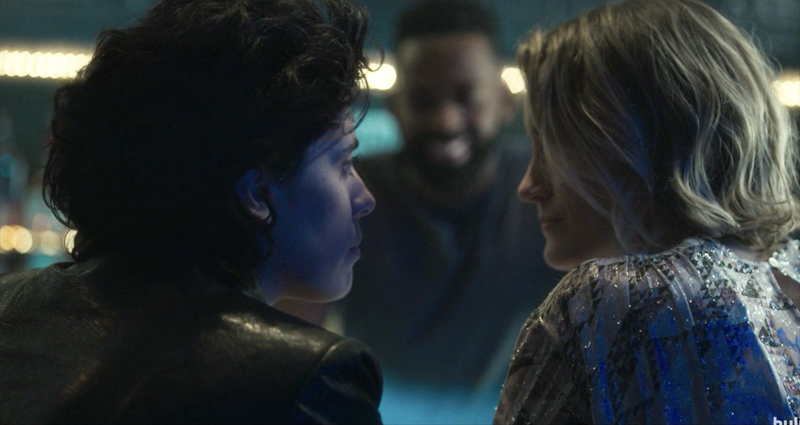 I should have known. The first 15 minutes were going too well…

And sure enough, eventually in the episode, after we get to know their suburban life and learn their 12-year-old daughter is at boarding school, Kate slits her wrists in the tub. Though much to Shawn’s surprise, Kate seems to exit the bathroom confused as to why she’s all wet, the gashes in her arms still present but no longer bleeding. Shawn sees this as a second chance to help her wife and does her best to keep her safe and happy but, because this is Monsterland, there are some…challenges. I won’t spoil the rest, but if you’re expecting the gay episode of Monsterland to be like the gay episode of Black Mirror, I must assure you: We ain’t in San Junipero anymore. 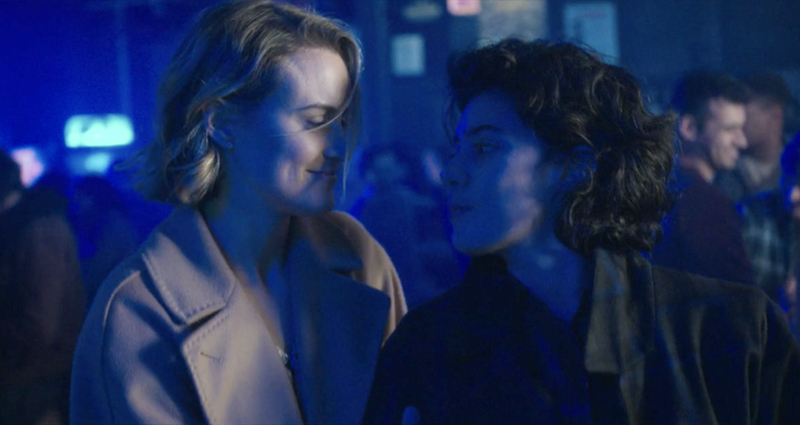 One last look at the good times.

I’ll start with the things I did like about the episode: queerness was never an issue or a factor. There wasn’t time to get into it, they met in law school when they were both out, so that was that. They are in love and that’s all you need to know. Also, when their daughter comes home, she calls out for, “Mom? Ma? Either mom, any mom? Just a kid lookin’ for a mom here.” Which I thought was very cute and felt natural to me. Plus, it’s nice to have two queer characters played by two queer actors, and both actors were extremely great in these roles. And honestly it has one of the more hopeful endings, believe it or not, of any of these episodes. (Granted, that bar is extremely low.)

Also, there’s a side of me with a sick sense of humor that is amused to have an attempt to bury a gay not stick.

That said, I didn’t love that the only time the “monster” in question was a main character was when it was half of a lesbian couple. Or that this is how mental illness was portrayed, or how Shawn is presented at times. I understood the metaphor, but I’m not sure THAT would have been the story I wanted to see myself in. It’s one of those complicated situations where, in a vacuum, I enjoyed the episode, but taking a step back and knowing that it’s not just queer people in a safe space watching this, it leaves me feeling uncomfortable in a different way than the rest of the episodes did.

All in all I enjoyed the series, and did still have the, “It was nice to be included” feeling by the end but reckon we have to have a bucket between “good representation” and “bad representation” called “technically representation but it’s complicated” because I think that’s where this would fall.