Hello! I’m back like an entire world hasn’t imploded since we were all last together on Thursday!! In the last five days, The President got COVID (maybe you’ve heard by now lol) and then that was only the beginning of how shit got weird. I was just saying how every day feels like a month and every hour also feels like a month and that’s how you know it’s 2020.

ANYWAY! We all have each other and I have this sunset that’s making the fall leaves look like shiny wrapped candy (or fire, but I prefer candy. The world is hard enough). Let’s see about these links!

“It’s hard, but as trans people, we have got to take back our power by not allowing the administration, other people, or society to determine our station in life… By any means necessary, I’m going to blossom.” — Angelica F*cking Ross!

Get into this!! Angelica Ross on Inclusivity in Hollywood, Getting a Buzz Cut, and Blossoming Into Herself BY CRISSLE OF THE PODCAST, THE READ!!!! So much Black Queer and Trans Brilliance!! And on a Tuesday? My god. 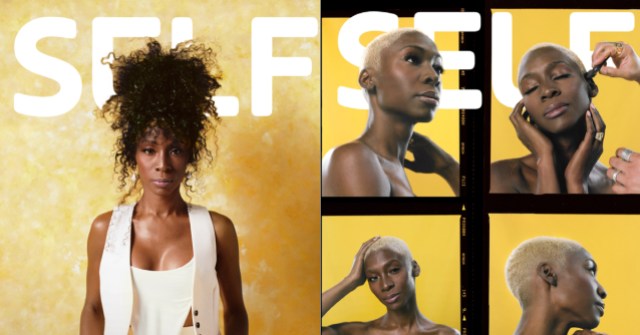 That sound you heard was my body hitting the floor, because I am now dead.

Could the Parents of LGBTQ+ Kids Decide the Presidential Election? Advocates Are Putting Money on It. At 57 million strong, how “Equality voters” could be the difference, especially in battleground swing states. (Or at least, that’s what organizers are hoping.)

RIP Soraya Santiago Solla, Puerto Rican Transgender Trailblazer, Who Left Us at Age 72. Death is always sad, but what a full life! May her spirit be at rest.

Maybe you are tired of hearing me checking in on the love story that is Roxane Gay and Debbie Millman, but LALALALA to me they are perfect and I don’t care!!

You know you married the right person when she discovers Fleetwood Mac's "Dreams" via a viral video on Twitter, agrees with your assessment that it is one of the greatest songs ever written, then takes a deep dive into the discography of Stevie Nicks. I❤️you @rgay.

‘A Battle for the Souls of Black Girls’

Super-Concierge Doctors, High-Design Home Classrooms, and Catered Backyard Dinners: Lifestyles of the Rich and Quarantined. You ever stop your day to read a thing? And also it’s so awful that you can’t turn away? It’s a crash on the side of the highway and you know you shouldn’t gawk but also what’s one last look? This is entirely and completely that experience. Also, eat the rich.

Related, probably: Is Mid-Pandemic Travel Creating a Resurgence of the White Saviour Complex?

Was the Commodification of Breonna Taylor Worth It? Let me save you the time, it wasn’t.

The Last Stand of the Violent, Pathetic Trump Man

How The Two-Party System Obscures The Complexity Of Black Americans’ Politics. Whatever, I’m a nerd. And this is also for nerds. BUT WOW I LOVED READING THIS!

RBG Is a Complicated Figure for Black Legal Scholars. Listen, I happen to really love RBG. But the indomintable Kimberlé Crenshaw had some points, and those points were heard.

Yesterday, Supreme Court Justices Clarence Thomas and Samuel Alito explicitly indicated in a court decision that they want the Court to revisit Obergefell v. Hodges, which declared that same-sex couples have a constitutional right to marry under the 14th Amendment guarantee to equal protection of the law. ARE YOU PANICKED YET!?!?

But before you get to the five alarm fire, please read this entire Twitter thread by Chase Strangio, one of the brightest queer and trans legal minds of our generation and exactly who I trust to see us through this mess.

The courts will not save us but they will increasingly become a constraint upon our ability to organize and save ourselves. As this process continues, our work is to keep up our fight whatever that looks like for us. Organizing, litigating, caretaking, resisting.

The courts will not save us. But maybe, just maybe, we can save ourselves.