Cat Hollis founded Haymarket Pole Collective because, as an adult entertainment dancer since 2015, Hollis had experienced first-hand the racism that runs rampant throughout the sex work industry. COVID put an extreme burden on sex workers, especially those of color, when their work disappeared and the government explicitly excluded them from CARES Act funding. After George Floyd was killed on May 25th, Cat knew she had to do something to help. Enter Stripper Strike. 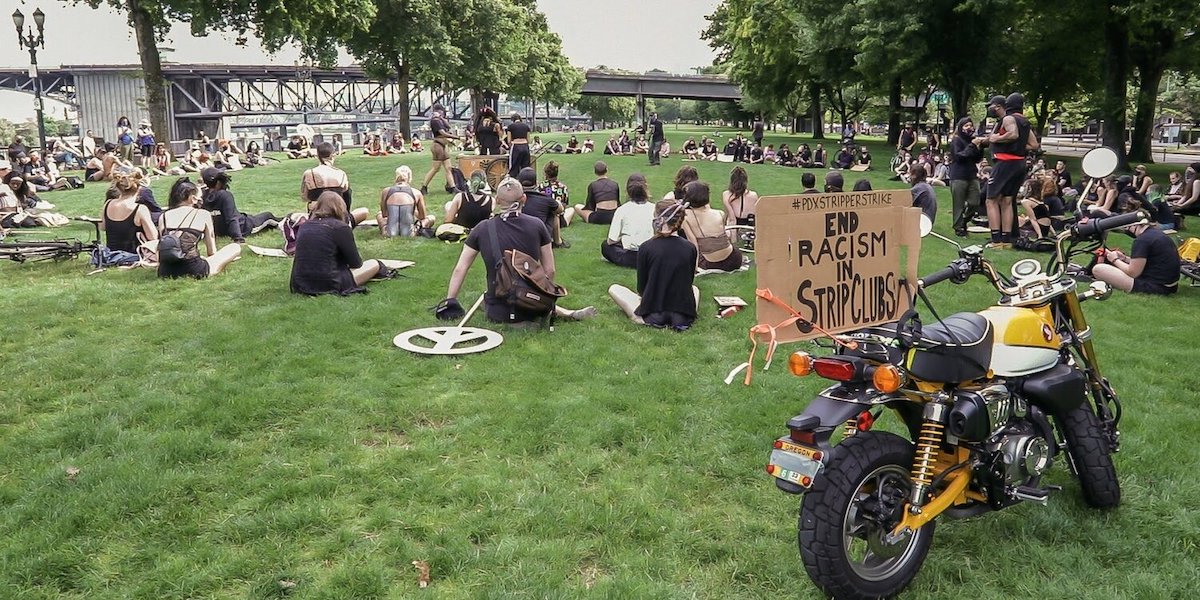 Zoe Sigman: Let’s start with the basics. What is Haymarket Pole Collective?

Cat Hollis: Haymarket Pole Collective is a collective of autonomous sex workers. I represent the Portland chapter. We are fighting for equitable and safe working conditions for Black, Indigenous American, and trans people in the adult entertainment industry. We currently have chapters in four cities, and are allied with sex worker organizations in twenty-one cities.

CH: Stripper Strike is our collective’s first action. It is an attempt to facilitate worker-led improvements of workplace conditions by showing our collective power in the streets. Independent contractors often have difficulty advocating for themselves in a workplace – which is their legal right. Stripper Strike is an attempt to show adult industry independent contractors, and the businesses where they work, that workers can choose where they contract. And that workers will not work at businesses with discriminatory practices.

ZS: So, Stripper Strike is an action that empowers dancers to advocate for themselves. How is that related to the larger Black Lives Matter movement that’s going on? Are Black dancers more impacted by the difficulty of advocating for themselves than other dancers?

CH: Black folks in particular, and marginalized communities more generally, deal with discrimination in any place of work. COVID has had a huge impact on the adult entertainment industry — it created a situation where nobody was working. The strip clubs were closed. The closures prompted by COVID, and the exclusion of sex workers from the CARES Act, made sex workers realize how much we have in common. We all have the same issues to deal with.

The focus on marginalized sex workers would have been much more difficult to address without the uprising fueled by the murder of George Floyd. It allowed Black sex workers to feel that for the first time we had the opportunity to demand that our voices were centered and uplifted.

Labor organizing in the sex work community has been going on for quite a while. And white feminists have engaged with that issue aggressively. Which is great, but it’s also been a very all-lives-matter sort of perspective. At a certain point you realize that sex work is work, and while all sex workers’ lives certainly do matter, not all sex worker lives matter until specifically Black, trans, and Indigenous sex workers’ lives matter.

ZS: It’s interesting to think about how the sex work movement has been a growing movement for a number of years. The decriminalization of sex work has been a conversation for such a long time, and it’s so amazing to hear that you are trying to center the most marginalized voices in that community. What has Haymarket done to lift up those voices?

CH: Very recently we participated in a town hall meeting with representatives from a variety of autonomous sex worker collectives throughout the United States. They were talking about SESTA/FOSTA and the decriminalization of sex work. [SESTA/FOSTA is a bill that was passed to limit sex trafficking. It has made it nearly impossible for sex workers to make money online — a vital income source for sex workers unable to meet clients in person due to COVID-19.] And even though there were Black bodies in that meeting, Black voices were not being uplifted. It was an amazing opportunity to say, “Haymarket is with you, if you put language into this which protects those communities.” And the orgs in the town hall agreed to do it. We will continue to leverage our platform to demand that organizing in the sex work community center Black voices and Black struggles.

Labor organizing often falls short of achieving its goals because it doesn’t promote specific language protecting the most vulnerable. Vulnerable populations get left out of organizing efforts and that exacerbates marginalization. Haymarket is working to protect those vulnerable people by demanding that language protecting those communities is a part of any project we’re involved in.

CH: One of the one of the biggest hurdles is the bootstrap theory. That if only you would try a little bit harder, you would succeed. When that view is internalized, it can be really degrading. One of the things that has most emotionally affected me is telling people that they’re not alone. These experiences are much wider than an individual lack of agency. We’re oppressed as groups, not as individuals. For a long time, oppressed individuals have been told there is a way out of being an oppressed individual. The truth is that you might lift yourself up to a level with more agency, but that doesn’t remove your marginalization. And it doesn’t necessarily make it easier for people who come after you.

For a long time, oppressed individuals have been told there is a way out of being an oppressed individual. The truth is that you might lift yourself up to a level with more agency, but that doesn’t remove your marginalization. And it doesn’t necessarily make it easier for people who come after you.

Haymarket has created a place for marginalized sex workers to feel safe. Too often we feel like we’re not trying hard enough — that if we just tried harder, we would succeed. Haymarket is making it clear that trying isn’t the issue, there are systemically created hurdles preventing the success of marginalized communities. It’s our job to remove those hurdles, not to train people to jump higher. We’re tired of jumping.

ZS: What projects is Haymarket working on to help that happen?

CH: There is a lot of individual responsibility as an independent contractor. Haymarket is teaching people what their rights are — regardless of their status as a sex worker or member of a marginalized community. We’ve started a series of free professional development seminars for people who would normally have difficulty accessing that information. Seminars on financial literacy, cyber security, and how to read a contract are currently in the works. It’s so important for sex workers to have access to high-quality information about business practices. There are a lot of predatory clubs and workplaces out there, and we want our members to be as protected as possible. We’re also working with IWW (Industrial Workers of the World) and DSA (Democratic Socialists of America) to teach sex workers how to organize and empower workers within their workplaces.

We’re providing trainings to workplaces on how to interrupt racist incidents when they happen, how to dismantle racism in their policies, and sexual assault awareness and prevention. We just signed up with a trainer to train up to 60 sex workers to lead these trainings. So they can be the people who are teaching their places of work how to uplift them. A lot of that is that Western and patriarchal culture says you need to have a certificate, your lived experiences aren’t enough. And that creates a gap. We’re closing that gap and teaching our community how to treat everyone within it better.

ZS: That’s super exciting! Are you doing those trainings online? Where can people find the information about this?

CH: We’ll be updating our website as we develop these programs. Folks can also sponsor sex workers who are interested in becoming trainers by donating. Part of marginalization comes from the lack of fiscal ability to take time to do things like advocate for yourself in your workspace. Donations will allow workers who might otherwise be able to afford that time to learn how to advocate for themselves in their workplace.

We are connected with autonomous sex worker collectives in almost every state. We’re currently working with Soldiers of Pole in California to create a network so that people in any state can look up who to contact locally to get involved. That will be available on our website within the next month.

Zoe Sigman is a writer and educator focused on cannabis science and social justice. She is the Science Editor for Broccoli Magazine and formerly served as the Program Director for Project CBD. She has testified about CBD and cannabis regulation to the FDA, and regularly speaks about cannabis and cannabis science to anyone who will listen. Check out what she’s been up to on her website.

Zoe has written 1 article for us.