There’s a lot to analyze about why all four states that had marriage-equality-related ballot proposals – Maine, Maryland, Minnesota and Washington – decided in favor of the gays. Mainers, Marylanders and Washingtonians decided to legalize same-sex marriage while Minnesotans decided they didn’t want a constitutional amendment against it. It’s easy to write about how supporters of marriage equality have learned the lessons of Prop 8, and it’s clear they did; for example, reaching out to voters of color played a key part in the Maryland campaign. But it also may be that anti-gay forces simply don’t have the infrastructure they did five years ago.

In the past, while pro-gay forces may have made a valiant effort (or not), they were always out-numbered and out-funded by anti-gay forces. And the scaremongering and appeals to insincere “family values” were always going to be more affective than anything about equality and fairness, especially if it seemed like equality and fairness for a group of distant, different people who most voters didn’t know. But that’s changed a lot recently. As more LGBT Americans have come out, more and more straight, cisgender Americans can say they know a queer person. And now we have a majority of Americans who say they support same-sex marriage. As recently as ten years ago, there wasn’t a single state in the U.S. that had majority support for same-sex marriage. 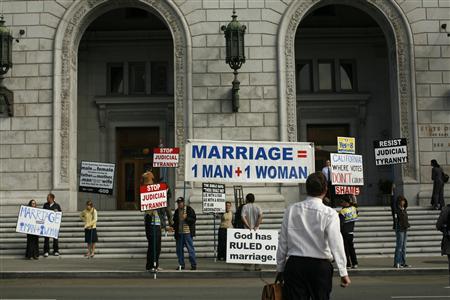 So it’s no surprise, then, that groups opposed to same-sex marriage are having trouble coming up with funds. The money situation is apparently the opposite of what it used to be; Washington state’s pro-gay-marriage side raised $12.6 million to the opponents’ $2.8 million. But what’s particularly gratifying is that it’s hurting them where it matters most: in court battles. According to Reuters:

Foes of same-sex marriage are laboring to pay the tab for an epic legal case now before the U.S. Supreme Court, as the movement suffers from fundraising shortfalls that could sap its strength in future battles. ProtectMarriage.com, the advocacy group defending a California gay marriage ban now under review by the high court, showed a $2 million deficit in its legal fund at the end of 2011 – the third year in a row that expenses exceeded donations, federal tax records show.

In 2008, by contrast, Protect Marriage’s fundraising nearly matched that of the No on 8 forces. Even if a lot of that came from outside donors like the Mormon Church in Utah, rather than from Californians, the fact that even those big dollars aren’t there to help save Protect Marriage from being unable to pay their court fees says a lot.

Because as more and more people have changed their minds on marriage equality, there’s also been more accountability for groups and people that don’t. In the age of the Internet, it’s harder and harder to make a private political donation and have no one find out, especially if you’re a large corporation or famous person. Look at the recent controversy over Chick-Fil-A, for instance. If anything, companies are finding it’s more profitable to take a clear pro-gay stance than anything else. Even when homophobes showed up in droves for “Chick-Fil-A Appreciation Day” last summer, the group still attempted to cave a few months later when the backlash to their homophobia outweighed the support. And while many questioned the strength of that caving, the company’s most recent set of tax returns show no donations to anti-gay groups. 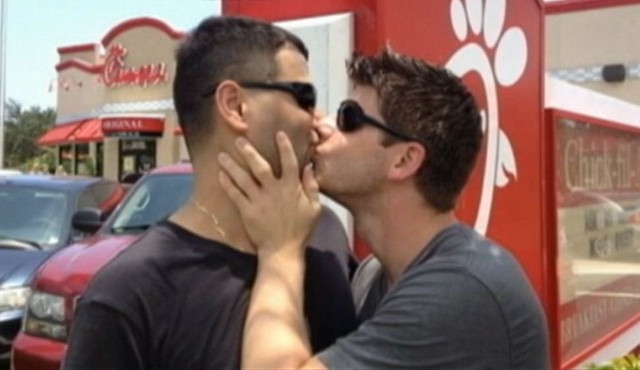 In the Reuters article, it’s noted how this social shaming can help make life difficult for even ordinary citizens who are committed to opposing marriage equality. It quotes Sean Fieler, who runs the hedge fund Equinox Partners and has donated over a million dollars to anti-gay groups like NOM, as saying “On the New York cocktail party circuit, the intensity of anger over the marriage issue has made being pro-life easy.” Fieler maybe can afford to be that flippant, but a lot of people are not; in 2009, the fact that sites like eightmaps made it possible for one to see private donors to the pro-Prop 8 cause raised privacy concerns when some donors started getting threats and intimidation, even though donations to political organizations have always been a part of the public record.

Then there’s the fact that even some in the Republican Party, which has made much of its success over the past several decades (like Bush’s re-election in 2004) on the backs of “social issues,” seems to want to distance itself from anti-gay politics now. In a recent interview on an Iowa political TV show, former Romney advisor Dave Kochel admitted that “frankly, the culture wars are kind of over and Republicans largely lost,” and noted that particularly young voters are straying from Republicans over their stances on LGBT rights and abortion. That distancing that Kochel might like to see is unlikely to happen as long as Republican primary voters remain extreme and the party platform remains explicitly anti-gay – but it says something that the conversation is even happening.

It often seems like things are just starting for marriage equality in the U.S. But when the anti-gay forces are losing much of what made them successful in the first place, it’s clear that it’s really the beginning of the end of this battle.