The Interwebs have been abuzz recently about Chik-Fil-A’s supposed anti-gay leaning. The company has always been linked to religious values: the chain is closed on Sundays, they play hymns at corporate headquarters, and they play Christian music at restaurants. “Glorifying god” is in their corporate mission. All this has led some people to nickname it “Jesus chicken,” which is absolutely what I’m calling it from now on. 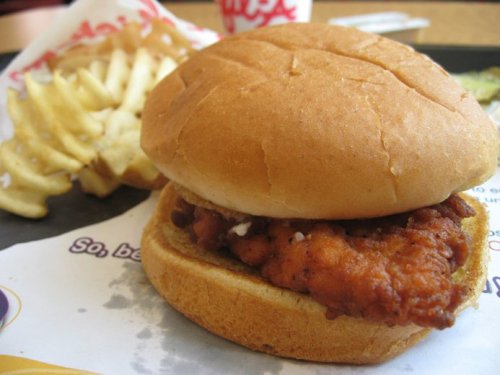 But now, people are saying that Chik-fil-a has sponsored Pennsylvania Family Institute seminars (PFI is about as evil as most organizations with family in the name these days), that they ask about religious involvement on franchise applications, and that they don’t let queer couples into their marriage counseling program at the WinShape Foundation. (Yes, Chik-fil-a runs marriage counseling.)

Some gay groups are calling for a boycott, and some rabble-rousing liberal college students have asked for Chik-fil-a to be removed from campuses. Change.org started a petition asking Chik-fil-a to stop doing this stuff, and they’ve collected about 25,000 signatures now.

The president of the company, Dan Cathy, talked to the Atlanta Journal-Constitution to try and diffuse all the bad PR. Turns out he’s really bad at that. He did the usual denying of the allegations, saying that the free food to PFI isn’t politically motivated, they don’t ask about religion on franchise applications, and the company isn’t trying to push a specific agenda.

“While my family and I believe in the Biblical definition of marriage, we love and respect anyone who disagrees… We’ve opted not to get involved in the political debate. It’s never been our agenda.”

That’s all fine and good, maybs this guy is actually sort of telling the truth, but then, he says this thing:

When asked if he would prefer the company was in the news for other things — the upcoming Daddy-Daughter Date Night, for example — Cathy said he welcomed the discussion of marriage.

“It’s been a really great thing for us,” he said of the recent controversy. “We intend to stay the course. It’s served us well. We don’t mind being in the news for this.”

Wait, what? You don’t want to get involved in the political debate, but you’re really glad you got the chance to talk about these issues and about your faith on a national stage? Yeah, that makes total sense.

So it looks like now we have a moral reason to avoid the whole “deep fried piece of chick on a buttered white bun with a big-ass glass of sweet tea” thing, on top of all the other trans-fat related reasons.