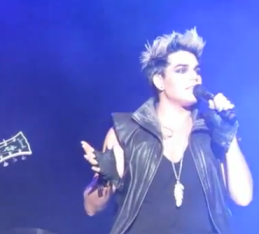 Hard at work in the studio writing and recording his second album, our golden boy stepped out with his first performance of new material since For Your Entertainment the other night in Quebec. “Outlaws of Love” beautifully articulates the struggle many gay people experience moving through the world and was co-written by Adam and BC Jean, a singer-songwriter known for co-writing Beyonce’s “If I Were a Boy.”

Adam tells US Weekly that the new album will be far more personal than For Your Entertainment:

“This album is different in that is has a more serious tone. There is definitely fun, upbeat music on there too. This album has a thread of honesty in that it is real and personal. On this album I let people in further. It is an autobiographical album that portrays my dreams and aspirations. There are also some songs that deal with heartache and love. Whereas my old album was fun, campy, and over the top, this album is more contemporary and honest. The last album was more of a fantasy and this album is a search for my identity.”

..
.
He was also misquoted in the same interview as saying:

“I don’t like to talk about my relationship [with boyfriend Sauli Koskinen] so if you see pictures of us out to dinner together, then great! I don’t see myself getting married in the future.”

.
Finally, are we all aware he’s getting his very own VH1 Behind the Music, airing this Sunday?. 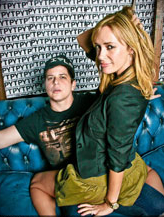 You must download the latest Gay Pimpin’ with Jonny McGovern podcast in which Julie Goldman walks you through the E! True Hollywood Story of her slightly traumatic experience on RuPaul’s Drag U (jump about 90 minutes in). And, you don’t want to miss any gems from Brandy Howard in the studio as well, so get comfy cause you’ll likely be listening to the 3 hour episode in it’s entirety.

She tweeted this photo of her 7th tattoo, an equality symbol with the message “All LOVE is equal” Salon details her outspoken nature when it comes to the gays:

Two months ago, the 18-year-old singer got in a Twitter tiff with a fellow Tennessean over “moral values” and declared she’s “not gonna be a closed-minded hypocrite,” before ripping into Rick Santorum and his acolytes, including “SHADYASHELL” Urban Outfitters. And last month, after the Casey Anthony verdict, she was railing on Twitter that “You know the world is skewed when people get away with murdering children but we cant get gay marriage legalized in the state of California.”

I also ran into her outside Coffee Bean in Palm Springs, a block away from Dinah Shore 2010, so.

Samantha Ronson was arrested for DUI on Monday, after DJing her brother Mark’s bachelor party at Lavo nightclub in Las Vegas. She was pulled over for speeding (89 m.p.h in a 70 m.p.h. zone) in her black Porsche and “showing signs of being impaired” at approximately 10:30 a.m. After failing a field-sobriety test and refusing a Breathalyzer test, Ronson was taken to the San Bernardino County Sheriff’s Department, charged with two misdemeanor counts of Driving Under the Influence and released a little before 6 p.m. Fun fact: According to the booking sheet, SamRon is listed as 5’7″ and 102 pounds.

Wearing an outfit that could only inspire fashion-envy from Barbara Walters and my grandma, Gaga co-hosted The View and performed “You and I.” She chats about the death of Amy Winehouse and a bit more of her past use of Cocaine (which she detailed on Howard Stern). 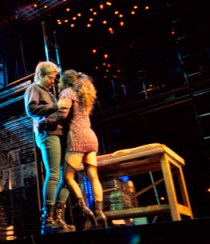 RENT is back Off-Broadway and Entertainment Weekly has a great interview with director Michael Greif, detailing the revival’s updated cast, set and wardrobe. And check out Vanity Fair’s gallery of images from the new production.

Speaking of revivals, there was a time when Lea Michele was rumored to take the lead role in the new Funny Girl, but it looks as through Six Feet Under‘s Lauren Ambrose has been cast. It is  also now officially official that Darren Criss will replace Daniel Radcliffe in How to Succeed in Business… for a three week stint beginning January 3rd.