Being a woman is expensive. And that’s n0t even including Bloomingdale’s. For the “average” woman in America, staying healthy is a challenge that exhausts both our resources and our patience. If there’s anything more annoying than passing out at the blood test facility and waking up without a slice of pizza in the vicinity, it’s trying to pay for the blood test in the first place. 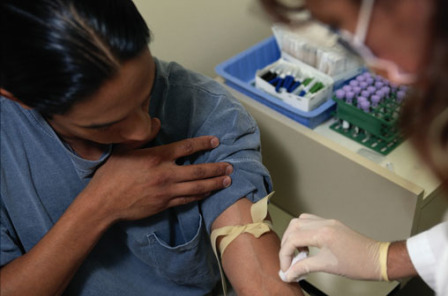 The fact that healthcare is so hard to afford for a group that still makes 75% less than men has consequences. Currently, the high costs of being a woman interfere with tons of lives, women’s and otherwise. It affects whole families! It means someone in a household is probably not being taken care of as well as they could be, and often the person (woman) not receiving adequate healthcare or having to use all her resources to obtain that healthcare is supposed to also be responsible for the health and wellbeing of everyone else in the household. Sometimes, it means women are literally struggling to survive. Which is precisely why the Institute of Medicine was totally in the right last week when they recommended in their yearly report that women finally not be left alone to cover the costs of their health.

So how much does a woman cost? Well. GOOD Magazine “took stock of the money spent by a “typical” American woman whose sexual health and life choices correlated with the national averages” and made it look very pretty so we could find out. It features the eight preventative services that the Institute of Medicine has declared women should be able to access free of charge, and determined how much they would cost with and without insurance. Definitely click through to view the full infographic, but here’s an example: 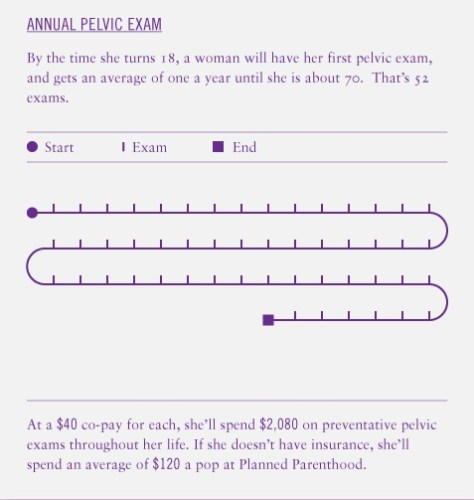 More specifically, the experts at the Institute of Medicine said:

“The full range of FDA-approved contraception, yearly well-woman visits, support for breast feeding, counseling for sexually transmitted infections, and screening and counseling for domestic violence are essential women’s preventive health services and should be covered by health insurers with no co-pays… The eight services we identified are necessary to support women’s optimal health and well-being. Each recommendation stands on a foundation of evidence supporting its effectiveness,” Linda Rosenstock, dean of the School of Public Health at UCLA, who chaired the panel, said in a statement.

Their recommendation included the following care: 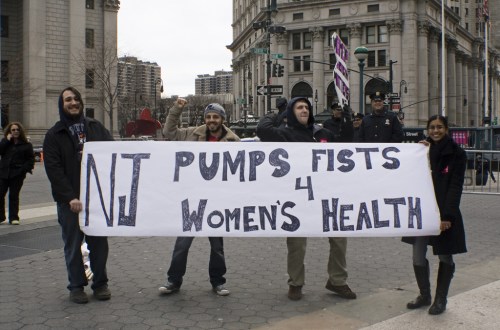 The Affordable Care Act requires that preventive health services be covered by insurance plans without out-of-pocket expenses. The services are identified by the Department of Health & Human Services, managed by Secretary Kathleen Sebelius. This recommendation is not necessarily the end point – but it’s a strong starting one. The recommended procedures, if included in the act, would promote women’s health and save women’s lives.

There will surely be opposition, however, about the recommendations – based mostly around the idea that contraception be covered as well. Women’s groups like NARAL are preparing for that challenge. And it’s also worth mentioning that even assuming these changes can be made, we’re not likely to actually see them in action until sometime in 2012. In the meantime, though, it’s worth celebrating that the Institute of Medicine acknowledges women exist, and should be treated like equals by insurance companies.

Senator Barbara Mikulski got it right when she said:

“Today’s IOM report means we are one step closer to saying good-bye to an era when simply being a woman is treated as a preexisting condition. We are saying hello to an era where decisions about preventive care and screenings are made by a woman and her doctor—not by an insurance company, members of Congress, or a stranger—and women are guaranteed preventive screenings and care with no additional co-pays or deductibles.”