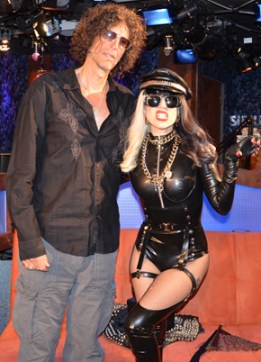 Lady Gaga‘s epic, 90-minute interview and performance on Howard Stern this morning has actually been several months in the making. After a few canceled appearances around the Born This Way release and a $500 bet with his producer (Baba Booey) that she would never show up, she finally came through with a mostly unpublicized appearance and boy was it worth the wait.

Unlike every other talk show, Howard Stern demands free reign of his guests, without any blacklisted questions or topics. She openly detailed her past drug use, songwriting process, Britney Spears rejecting “Telephone,” ex-boyfriend Luc Carl, and even played the Blackberry voice memos from the moments of first inspiration for “Bad Kids, “Judas” and “Highway Unicorn.”

On her early cocaine-fueled, songwriting process:

“I was for sure addicted. I did it all alone in my apartment and wrote music. And I regret every line I ever did. So to all of the little sweethearts who are listening—don’t ever touch it. It’s the devil.” I think that I was lonely and there was something about the drug that made me feel like I had a friend…and I regret every line that I ever did.”

.
On whether she’s obsessed with her weight she openly admitted:

.
She also described how “Marry the Night” was inspired by the time early in her career when she realized she couldn’t continue playing Los Angeles club gigs and realized she is meant to be in the jukebox and pool table dive bars of NYC.

“It was like a visceral queef. ‘No thanks! See you later, it’s been nice in the sun,’ and I went right back to New York and I married the night.”

.
She talked about coming up with “Edge of Glory”  just as her grandpa was dying, witnessing her grandma urge him to let go and pass on. On the day her grandpa died, Gaga said she and her father sat down at the piano in their home and traded shots of tequila and she told her father, “Grandpa’s about to cross over into his glorious moment. It’s hard now because he’s on the edge.” She said it’s also about “knowing in your heart you may never reach that glorious moment until you die, so live life on the edge, halfway between heaven and hell, and let’s all dance in the middle in purgatory.”

Finally, she performed stripped-down versions of “Edge of Glory” and “Hair” and Howard admitted it was one of, if not the best live performance he has ever had in-studio.