Elicia Sanchez is a stand-up comedian living and joking in Seattle, though this week she has temporarily relocated to Angelus Oaks as part of the talent line-up for A-Camp. She’s been performing stand-up since 2010 and has taken part in the Bumbershoot, Bridgetown, and All Jane No Dick comedy festivals, among many others. She also co-hosts That’s Provocative, a podcast with Nick Sahoyah, and The Enematic Cinematic, her comedy podcast about bad movies. 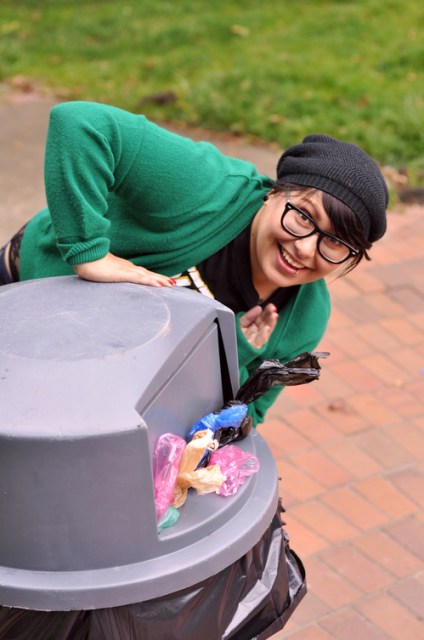 Since my dad was a big comic book fan, I grew up having The Amazing Spider-man and The Incredible Hulk read to me as bedtime stories (aka I was never going to be cool) so it’s kind of hard to remember which comic I bought first, but the first comic I remember buying with my own money was an old copy of the first issue of the Savage She-Hulk when I was in high school. She-Hulk always was and still is my favorite. I have that cover tattooed on my forearm.

SVU all the way! Sorry if I just sounded way too excited just then. Is that a creepy answer?

What’s the best kind of pickle?

Well first of all, dill. Definitely dill. Then deep fried.

As a kid, were you the class clown?

Sort of. I was a nerd growing up so I was teased a lot for being weird and fat, but I was also the kind of kid that didn’t get I was a loser. I just thought no one got me except the Power Rangers and my potbelly pig, Lucy. I’d like to think I was the funny fat girl in high school, but I’m sure a lot people remember me as loud and kind of annoying.

What’s one joke you heard and thought, “Shit. I should have thought of that first!”

Anything with clever puns. I suck at puns and I cringe when people tell them, but those jokes get laughs and awes of appreciation so I wish I was better at them. Then again, puns.