Maybe you’re in the post-graduation slump. You’ve got loans to pay, no job, fewer friends than before, and the requisite depression. Or you’re humming along in school, always a little too tired and a little scared about what’s coming next. If you went to school ages ago, you’re counting your lucky stars. If you never went or dropped out, you just might be too. Between money and sanity, a university education could be one of the most costly investments you’ll ever make.

If you’ve ever felt like something’s wrong with American colleges, you’re not alone. The statistics are flooding in and they’re on your side. According to Benjamin Ginsberg, a political science professor at Johns Hopkins, tuition rates at public universities have tripled since 1980 while tuition at private schools has doubled. That’s three times the rate of inflation since 1982. The only other good or service that’s seen that kind of price hike is cigarettes. To compensate for the growth in tuition costs, students are taking out loans are alarming rates. 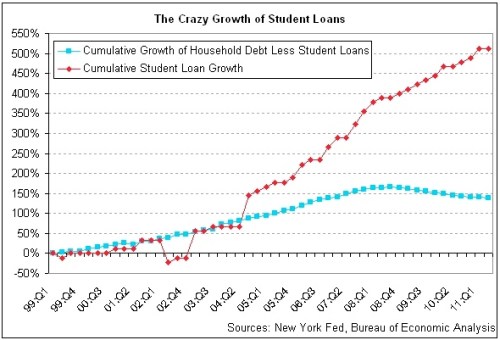 Professors Andrew Hacker and Claudia Dreifus believe that what’s coming next for student debtors could be disastrous.

“The next subprime crisis will come from defaults on student debts, starting with for-profit colleges and rising to the Ivy League. Still, there’s a difference. With mortgage defaults, banks seize and resell the home. But if a degree can’t be sold, that doesn’t deter the banks. They essentially wrote the student loan law, in which the fine-print says they aren’t “dischargable.” So even if you file for bankruptcy, the payments continue due. Hence these stern word from Barmak Nassirian of the American Association of College Registrars and Admissions Officers. “You will be hounded for life,” he warns. “They will garnish your wages. They will intercept your tax refunds. You become ineligible for federal employment.” He adds that any professional license can be revoked and Social Security checks docked when you retire. We can’t think of any other statute with such sadistic provisions.”

Um, terrifying. The obvious questions–where is all this money going?–isn’t an easy one to answer. Ginsberg points to the glut of administrators on campuses as a major tuition-sucker. While the number of professors employed has increased around 50% over the past 40 years to keep up with growing enrollment (the student to faculty ratio has remained nearly constant at 15-16:1), the number of administrators has grown 128%. While universities justify the number of administrators employed by citing new demands in enrollment and technology, pressure to keep up with external mandates, and unwillingness from professors to perform administrative tasks, Ginsberg paints a different picture. He mentions case after case of administrators abusing their power and reveals the high cost of president and deans. Ginsberg believes that professors have no desire to take part in administration, not because they see themselves above it, but because any power they used to have has been stripped and redistributed among an “army of functionaries” who view the means (management) as the end.

The means/ends dilemma isn’t one that’s confined to bureaucracy and meetings. Students are often unsure about why, exactly, they’re at college. A 2009 survey of Penn State student (totally not scientific, I know, but bear with me here) showed that nearly half of freshman said they were there “to prepare for a vocation [or] learn what I have to know in order to enter a particular career.” Next came “to pursue scholarly activities for intellectual development,” followed by “to discover and develop my own talents,” and finally “to become more mature, learn how to take on responsibility and become an adult.” 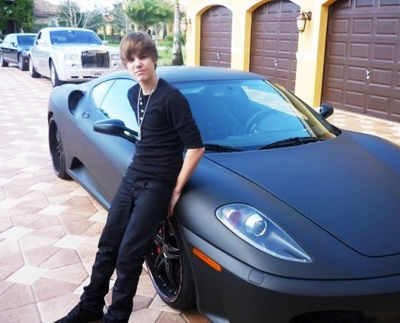 Justin Bieber learned how to "to become more mature, learn how to take on responsibility and become an adult"

Throw tuition into the mix and that’s enough to make anyone’s head spin, let alone an 18-year-old who, as Hacker and Dreifus point out, are not exactly experts at handling money. Our model for financing education requires one of three things: students (ahem, parents) must be able to pay up front, students must win scholarships, or students can take out loans. While scholarships are available, universities rely on accepting a class of students who will pay at least 50% of their tuition costs to come out even. If you take a second to harken back to that ugly ugly graph (or your own bank account), it should come as no surprise to you that most students take out loans.

Universities justify such high numbers by citing studies that show college graduates average $1 million more in lifetime earnings compared to their high-school-diploma-fied counterparts. The $27,650 that the average American student takes on in debt is nothing compared to $1 million! One of the major issues, though, is that payment on student loans begins 6 months after graduation. While expanding one’s mind at college is a noble pursuit, it often comes at the noble price of having a family who can alleviate the financial burden of loans. Instead, most students are under pressure to study something that directly translates into a high-earning job.

Having college graduates with workforce-ready degrees doesn’t sound like a bad thing for our clearly depressed economy, but what might work now isn’t going to cut it in the long run. As we experience changes in technology and as outsourcing becomes even more routine, those jobs that once opened a direct pipeline to the bougie life will no longer be so profitable. I know I’m biased, but I believe an undergraduate education in the liberal arts creates students who are comfortable with change and excel at creativity–both invaluable skills in the modern labor market.

The problem with universities is that there isn’t just one. With every solution comes fifteen unintended consequences. It’s not a matter of just changing educational priorities, balancing administrative and faculty employment, or tackling the student loan crisis, it’s figuring out how to juggle all three.