I bet you’ve really missed talking about California’s Prop 8. Well your wait is over! The latest kerfuffle is over whether or not videos of the Perry v. Schwarzenegger trail should be released to the public. From the standpoint that, as nation, we agree that a more open and transparent judicial process is a better judicial process, this seems to be a no-brainer. However! 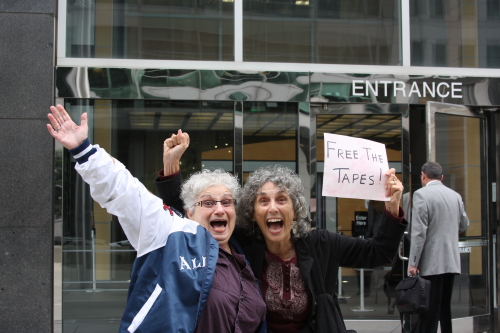 Defenders of Prop 8 are arguing that releasing the videotaped footage of those who spoke in support of the ban would place these people in danger of intimidation and harassment. Taking into account that a transcript of the trial is already available to the public and that the names of those who spoke at the trial are on public record, this argument doesn’t hold much water.

Several people have already been using the the transcript to film reenactments of the trail, including this heart wrenching clip of Helen Zia’s testimony by Patricia Clarkson:

At the time of the trial, Judge Walker made it very clear that he believed trial footage should be made widely available, and sought to livestream the entire process via internet, which was approved by the U.S. Court of Appeals for the Ninth Circuit.  But opponents of gay marriage squashed that idea by appealing to the Supreme Court, who then issued an injunction to ban livestreaming and televising. All the same, the trial was videotaped for Judge Walker’s personal use and he’s been employing some of the footage during a speaking tour advocating for cameras in the courtroom.

Attorney Theodore Boutrous who represents the American Foundation for Equal Rights responded to those pushing to keep the video tapes from public view on Monday:

“The proponents have been utterly unable to explain why the public should be barred from seeing and hearing for themselves what happened in a public trial potentially affecting the rights of millions of Americans.  The real reason that the proponents are fighting public release is that [they] do not want the world to see the powerful evidence we submitted showing that Proposition 8 flatly violates the Constitution and the extraordinarily weak case that they put on trying to defend this discriminatory law.”

The decision from Federal Judge James Ware on whether the tapes will be released  should be reached soon. Judge Ware spoke yesterday after the two hour trial regarding the release of the tapes stating he generally viewed media in the courtroom as a good thing noting, “I recognize that this is a matter of high public interest and the release of the tape might heighten public knowledge.”

Considering that citizens of California are still unable to marry based on this case, they absolutely deserve access to these tapes.