Hey Miami, what are you doing tonight? And don’t even try to say you’re busy because trust me, you do not want to miss this event. 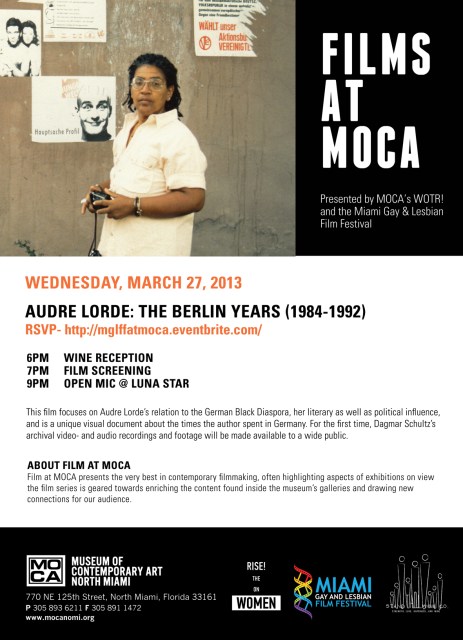 miami, trust me: you do not want to miss this

The Museum of Contemporary Art, Women on the Rise and the Miami Gay and Lesbian Film Festival are hosting a screening Audre Lorde: The Berlin Years (1984-1992), a documentary about Lorde’s final years in Berlin, and there’s gonna be a wine reception beforehand and an open mic afterwards and it’s being organized by a fellow Straddler and you’ve just got to go, alright?! Okay whew. Let me slow down and back up and explain.

I learned about this event while interviewing Charrise, a Miami-based Straddler, for an upcoming Straddler On The Street profile. As soon as she mentioned it I knew y’all needed to know about it. Not only is this event about a film highlighting a really important woman of color who helped build our community’s herstory, but Stand Tall Wine Company, which produces Genetic, the first LGBTQ wine label ever produced (and is coincidentally our absolute favorite wine company ever), is hosting the wine reception! And then, after all this amazingness has already gone down, you can perform at the open mic and impress everyone with your amazing performance skillz! I know. I told you that this is not an event to be missed!

As the person who interviews all you perfect Straddlers On The Street, I am constantly floored by how incredible you guys are at organizing the events you want to see in this world and turning your dreams for our community into a reality. I asked Charrise how she came up with the idea to host this event, and she explained:

My best friend Ebony and I came up with the concept for this event out of a desire to find the community of queer women who, like us, were tired of the gay scene that revolved around clubs. We were hoping to create an event that would pull together all of the artsy, intellectual, quirky, young queer women of color who we had met randomly sprinkled in our usual circles. We wanted a space where we could actually have intellectual conversation and debates, enjoy and express art, and meet new faces.

The documentary itself is about Audre Lorde’s final years in Berlin and chronicles an untold chapter of Lorde’s life: her empowerment of Afro-German women, as she challenged white women to acknowledge the significance of their white privilege and to deal with difference in constructive ways. It’s going to be amazing because it will be one of the few social events that support a creative atmosphere for young queer women of color in Miami, where we can actually meet and talk to each other without screaming over booming club beats. Developing this new community will also tell our local gay organizations and businesses that there is an audience for this type of social event, and to produce more! We are having an open mic after to continue the creative vibe well into the evening!

And how did Stand Tall Wine Company get involved? Aren’t they based in California? Why yes, yes they are. But they’re traveling specifically for this event because they’re awesome.

I discovered Stand Tall Wine on Autostraddle. I am a total wine lover and I try to turn everyone else I know into one too. When we decided to have a wine reception I reached out to Stand Tall; I heard back from them the next day and they were totally on board. Larissa decided not only would they sponsor the event, by being the sole wine provide for the free reception, but that she would fly out here from California to Miami to pour wine for the event!  It was way more than I ever expected!  I really wanted this partnership because I thought it would be a great opportunity for the Miami Gay & Lesbian Film Festival to highlight a LGBTQ marketed and lesbian owned business, and I believe very strongly that members of the LGBT community should support one another.

So get out there and support Charrise in this endeavor — what more could you ask for on a beautiful Miami evening than Audre Lorde, Stand Tall wine, open mic performances and our gorgeous community supporting one another?