One of my favorite things to do is to laugh at men who say that women don’t care about comics and then point them to the New York Times graphic novels bestseller list where Raina Telgemeier always has at least half of the top ten books (if not all ten) and many other women, including queer women and women of color, regularly appear. It brings me so much joy to see them have to scroll down past Sisters, Smile, Ghosts and half a dozen Babysitter’s Club graphic novels before they see anything close to a Batman or Iron Man. But I won’t be able to do that any more because yesterday the Times announced, without any warning, that they’re eliminating many of their lists, including the Graphic Hardcover, Graphic Paperback and Manga Categories, which are the places where the comics would be listed. This isn’t only a major blow to creators and publishers of comics, but to comics fans and fans of all types of books. 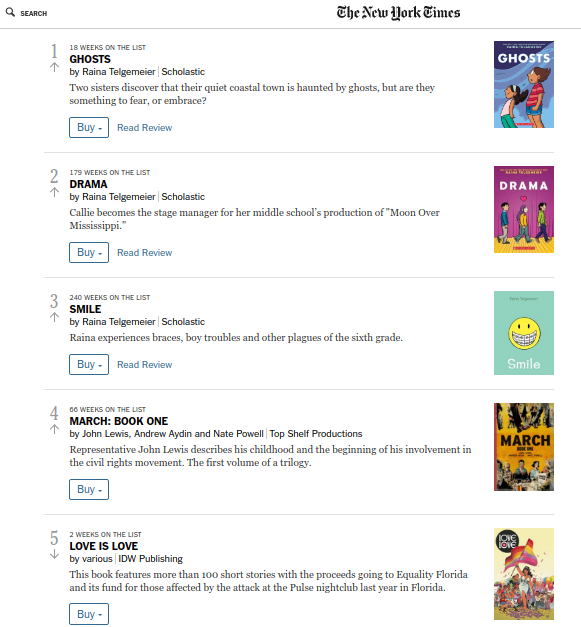 Many in the comics world are understandably reacting with shock and sadness. This is a big blow to a part of the publishing world that is often regarded as “books for kids” or something less than “real literature.” It’s an especially big blow to marginalized people. Queer women, for example, have been able to find success on these lists and have been able to build careers partially off of that. But they’ll no longer have that chance. I spoke to several industry insiders after the announcement yesterday.

Robin Herrera, an Editor at Oni Press, sees it as nothing more than a way to make the publishing world even more exclusive.

I’m disappointed in the New York Times’ decision. They’re making it feel like some kind of exclusive club now, and of course that means sticking to more traditional book publishing. Lots of the children’s and YA categories are now gone too, and that’s a real shame with how big that market is. Now the window to be labeled as a bestseller is even smaller for authors and creators, including those who are published through many indie presses as paperbacks. It feels as if the New York Times is trying to tell us which books should be considered “real” books, books that are “worthy” of reading. Honestly, I don’t see how anyone will actually benefit from this decision.

Shannon Watters, an Editor at Boom! Studios and Lumberjanes co-creator added that this decision will erase marginalized creators even more than they already are.

The NYTimes Bestseller List for graphic novels offered irrefutable proof that the creators, genres and themes truly dominating the medium were those marginalized by so-called “mainstream” comic book publishing (women, creators of color, LGBT creators, kids graphic novels, etc.). Thanks to that list, we know that the largest group reading comics right now are young women. What a valuable tool to lose for such ridiculous reasons at such a terrifying, tumultuous juncture.

Wendy Xu, the co-creator and artist of Mooncakes sees it as a move by a business that’s already falling behind the times and will only fall farther.

I think the gutting of the NYT bestselling comics list just shows how uninvested they are in getting with the times. More and more non-comic imprints across the major houses are picking up graphic novels, helped in no small part by what they’ve seen in critical reviews and bestselling lists. It definitely influences the market, and opened up traditional prose editors to working with more illustrators. I’m so disappointed; it feels like a petty power play (especially given just who was on that bestseller list to begin with).

Fans are also angry. Many of us found out about comics we might be interested in through the list, and many more became new fans by seeing these lists and the books on them. The New York Times Bestseller list is prestigious, and when you see a book on it, you’re more likely to buy it. That’s not ideal, but it’s true. As one comic fan I talked to pointed out that getting on this list is a way for comics to gain some credibility and notoriety.

It was widely reported that John Lewis’s autobio comic “March” shot up the NYT bestseller list post-inauguration of the Trump regime — a book that may be loved and lauded by many comics people and a selection of educators, but certainly not a wider public who are both unfamiliar with comics or the ragged history of America. Appearing on the NYT list meant more people noticed the comic, and more people went to buy it out of curiosity or surprise that such a work exists – and of course being greeted with an exceptional work with astonishing relevance to the current climate in the US. To wipe out the lists is to remove this book and others like it from a wider readership’s ken.

This isn’t just a puzzling move, it’s one that will have a real impact on industry people, fans and people who could have been potential fans. Not only that, but it will also have a real impact on the artistic and social landscape of America. It’s no secret that a lot of queer women love comics. We’re able to see heroes who look like us and we’re able to see writers and artists who look like us. So go out and buy comics and we shape these lists. When there’s no longer a “legitimate” place like the New York Times reporting that women, people of color and queer people are constantly selling and buying the most comics, straight white men will be even less likely to believe us or think they need to pay attention to us.