Raina Telgemeier has a pretty fitting first name seeing as she’s pretty clearly the undisputed Queen of Graphic Novels right now. I don’t mean Queen in the patriarchal sense of a woman standing by the side of her king, but in the sense that she is alone at the top of the Comic Book Kingdom (or Queendom, rather). Not only has her book Smile been on the NYT Graphic Novel Bestseller list for three solid years, but for much of the summer, she’s had three books in the top four, and in May actually swept the entire top four spots. What makes this even more remarkable and wonderful is that Telgemeier’s books are about and aimed at middle school girls. 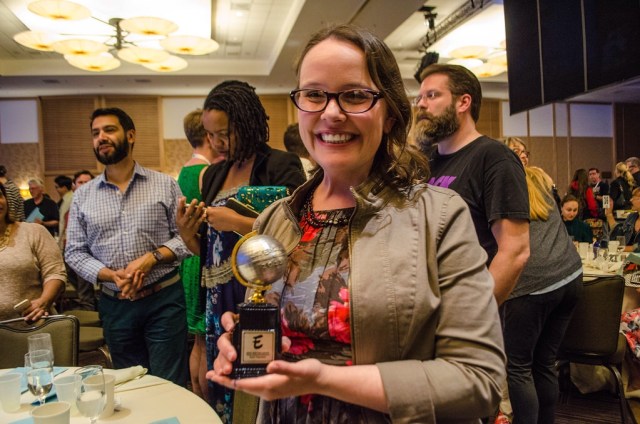 Raina Telgemeier with an Eisner via Publishers Weekly Comic World

Now, for a lot of us that might not seem that remarkable. We know plenty of girls and women who read and love comics. Still, the perception is that comics is a man’s world. Monthly titles like Lumberjanes, Ms. Marvel, Batgirl and The Unbeatable Squirrel Girl have been showing that girls and young women, despite what fanboys and industry insiders have been saying for years, represent a huge number of comic fans and buyers. Telgemeier shows that the same is true for graphic novels. All of these books are selling incredibly well and winning plenty of awards (Smile won the Eisner for Best Publication for Teens and this year she won the Eisner for Best Writer/Artist at this year’s awards), and yet people still act like comics are mainly made by and read by men. That’s not only an insulting, misogynistic and just plain bad opinion, it’s also plainly not true. If it were, Smile wouldn’t have sold over 1.4 million copies.

from Smile by Raina Telgemeier

Telgemeier’s first and, so far, most popular book is Smile, a story about her own experiences as a middle schooler learning to deal with braces, growth and changing friends. Within fifteen minutes of reading this book I was in love with Telgemeier’s work. The book starts with Raina falling on her face after a Girl Scout meeting, knocking one of her front teeth out and pushing the other up into her gums. We then follow her as she tries to not be self-conscious about her teeth while her so-called friends bully her — sometimes because of her teeth, sometimes for just being herself. It’s a great look at learning to love yourself and stand up for yourself, especially at an age when that kind of stuff can be really hard.

After Smile came Drama. Drama is about a middle school girl named Callie who works as the set designer for her school’s musical and tries to deal with both the drama of the theatre onstage and the drama of friends, identity, boys and school dances offstage. This is probably my favorite of her books. Like Smile, a large part of the book focuses on being proud of who you are and finding a group of friends who are proud of that person too. It also features some really great young gay male characters, which is something drastically lacking in all-ages media. 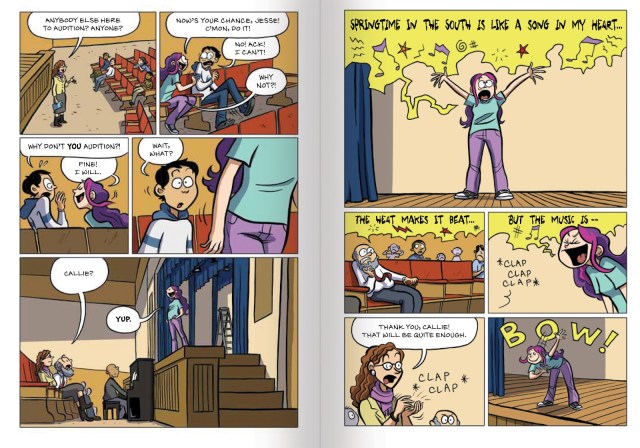 From Drama by Raina Telgemeier.

Last year Telgemeier released a companion book to Smile, titled Sisters, which features a young Raina and her family, including her rival of a sister, going on a road trip to a family reunion. This book might seem like it’s about a simple sibling rivalry, but it really gets to the heart of family dynamics. Raina grew up wishing for a sister to play with and wanting to hang out with her slightly older cousins, but now that she’s in middle school and she actually has a sister, things don’t exactly go according to plan. Again, Telgemeier is writing about things that tons of kids go through all the time, she’s showing that those kids aren’t alone and she’s doing it in the best way possible. Her books are like wonderfully illustrated versions of those letters that people always say they’d write to their younger selves. But everyone gets to read and enjoy them.

Telgemeier is also writing and illustrating graphic novel versions of Baby-Sitters Club books, which I haven’t been able to read yet, but seem pretty incredible. There’s a pretty clear pattern to her success. These books are by a woman, about girls and for girls. Now, these books are definitely good enough and the stories are definitely relatable enough for readers of all genders and ages to enjoy them, but we shouldn’t pretend that girls aren’t the intended audience. I just want to go out and give all three of her books to all the 11 and 12-year-old girls out there who aren’t sure of themselves, who don’t have a good friend group, who feel self-conscious about their body or who don’t have perfect families. After reading them, I’m sure you’ll feel the same. 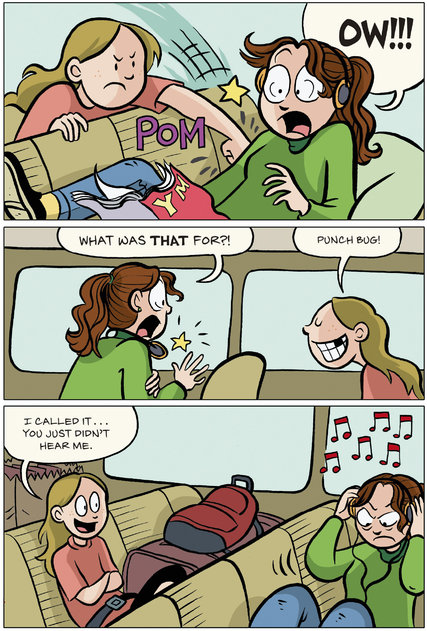 From Sisters by Raina Telgemeier.

Now, these books are good, or rather, they’re great. Telgemeier is a masterful storyteller and is great at making her 13-year-old characters seem like real 13 year olds. She knows how to craft relatable, funny, moving stories with stakes that might not seem high if you look at them objectively, but when you look at them through the lense of a middle school girl, they’re as high as the Himalayas. She’s also a terrific artist. While many mainstream comics artists are drawing teenagers that look like they’re based on the same swimsuit models their 30-year-old characters are based on, Telgemeier’s characters look young enough to be the ages their supposed to be. Not only that, but her art is just plain fun. There’s a clear Bill Watterson influence, but the style is all her own. It’s fluid and bright and fun and expressive; it’s absolutely perfect for an audience of girls.

Raina Telgemeier is really kind of in a weird spot. She’s without a doubt the most popular graphic novelist out there today, but she doesn’t get nearly the attention that many of her male contemporaries do. Honestly, if she were a man (at least if she were a white man) selling as many comics as she does wouldn’t she be huge literary celebrity? She’s one of the best and most important writers and illustrators in comics today, and we should be treating her like it. So if you’ve read and enjoyed her work, please share it far and wide, and if you haven’t yet, pick it up right now — you’re missing quite a treat.

Years of Future Past #4 (Marvel)

Before you go! It takes funding to keep this publication by and for queer women and trans people of all genders running every day. And A+ members keep the majority of our site free for everyone. Still, 99.9% of our readers are not members. A+ membership starts at just $4/month. If you're able to, will you join A+ and keep Autostraddle here and working for everyone?
Join A+
Related:comics/graphic novelsDrawn to Comicsregularwomen in media