A+ members! Tonight’s the night you can watch The L Word: Generation Q with Analyssa, Drew, and Riese! See you there!

This week, Drew chatted with Daniel Sea about Max’s return to The L Word. Drew and Analyssa dropped another glorious To L and Back podcast episode. Kayla enjoyed the mean queer psychic domme in Leopard Skin. Lily wrote about queer girl autistic representation in Heartbreak High and Dead End: Paranormal Park. Kayla brought you the latest from Yellowjackets season two. Our TV Team released our list of favorite lesbian and bisexual TV episodes of the year. Drew released her list of best queer movies. Shelli had some thoughts on BET’s Christmas Clapback. Nic had some thoughts about Something From Tiffany’s. And our whole team got together to share our 2022 TV and film hot takes.

Willow Episode 104: “The Whispers of Nockmaar”

“Remove your grubby hands from my princess!!”

This week on Willow, our adventuring party’s quest takes them to the abandoned castle of Queen Bavmorda, aka, Kit’s Grandma. They’re trying to find a way to rid Graydon (Kit’s betrothed) of the darkness that’s slowly growing within him, while I try to find a way to determine what’s actually going on because of the literal darkness on screen. While they plot, Kit suggests mercy killing Graydon, but Boorman opines that killing someone who isn’t actively trying to kill you hits different. To that point, Kit pulls Jade aside to see how she’s doing after killing Ballantine. She tries to empathize with the soon-to-be knight, but as kindly as possible, Jade reiterates Boorman’s point that the princess just can’t understand how she’s feeling; and Jade honestly hopes that Kit never does.

One thing I’ve been hoping for is some Jade backstory, and we got a little peek in this episode! She remembers doing hard labor as a kid and being grateful that Queen Sorsha took her in, but she also remembers that when Ballantine took an interest in her, he gave her a way to channel her anger into being something; “he gave me a sword and I killed him with it.”

Jade needs some time alone, so she and Kit separate; Kit to collect ingredients for Elora, and Jade to brood and eventually have a 1:1 chat with Boorman about Kit’s mercy killing suggestion. While Jade tries to find her way back to the party, she sees a vision of her mother slain, presumably in the midst of the attack that killed her. Jade fights a General that may or may not be there before ending up in the same room as Kit.

The two commiserate about the creepy castle until Boorman attempts to get into the room, but they refuse until he tells them something only the real Boorman would know. Never missing an opportunity to roast them, Boorman says what we can all see: “you two have the hots for each other!” And the way they jumped away from each other SO FAST to deny it?! Kit, you literally kissed Jade on the mouth!! And then 10 seconds later, Jade demands that Boorman stop touching “MY PRINCESS.” Be fucking for real. They’re so stinkin’ cute, I can’t take it.

Once they return to the rest of the group, Jade is ready for a mercy killing, but Kit is the one who stops her in favor of putting their trust in Elora’s abilities. It’s really sweet and shows some actual growth for our dear princess. Once Graydon is cured, they continue on their journey to the Immemorial City in hopes of curing Kit’s brother Airk, but not before we see some very evil looking cronies plotting to disrupt their plans. Perhaps next week PrincessKnight will admit their feelings for each other?? One can only hope.

Survivor 4313: “Snap Some Necks and Cash Some Checks” 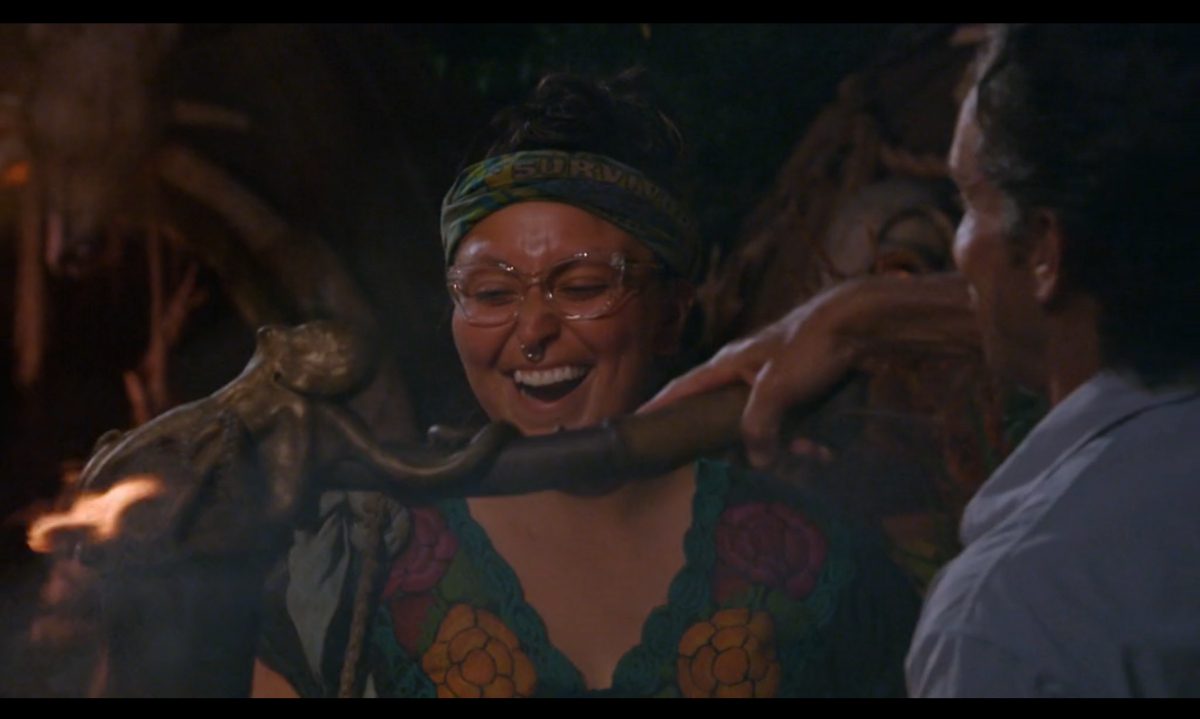 At the beginning of the finale episode, it’s clear the odds are against Karla — everyone has identified her as a threat and wants her gone. In a confessional, Karla states: “I have the heart of a warrior; I’m not giving up,” and once again I am just so thrilled to see her on the big screen! Before I have time to get even more emotional than I already am, tree mail shows up on the island, with a letter-scrambled clue for finding an advantage. Karla solves it first and takes off running, which is more like hobbling, since her ankle is still busted and she’s clearly in a lot of pain — she’s down but she’s not out! Karla manages to find the clue just before Owen (which makes him very mad). At this point, it’s important to mention that everyone at my finale viewing party is talking about Karla’s winning smile.

Anyway, they get to the challenge which is for both immunity and reward, and despite her advantage, Karla doesn’t win — Owen does. He decides to take Cassidy with him to eat steak and drink wine. Back at the island, Karla and Jesse seem to be teaming up — both gunning for Cassidy. But, Karla tells us, she’s trying to use this to blindside Jesse. Jesse has decided that he actually wants to keep Karla around, because after her, he’s the biggest threat — so long as she’s there, he can take attention off of himself. At Tribal Council, however, Jesse reveals his hidden idol and explains that he is going to use it for himself. There’s a lot of chatter, and Owen and Cassidy are basically saying they are planning to vote out Karla. Even in this moment, when Jesse and Cody have immunity, when Cass has openly told Karla she’s coming for her, and when Gabler will do what Gabler always does (whatever some dude tells him to do), Karla STILL doesn’t give up. She wheels, she deals, she spins, she puts offers out there, she gets out of her seat to whisper to Jesse, she does anything but sit down and accept her fate.

Sadly, it doesn’t work. Karla is voted off, and I’ll be honest, my heart broke. But Karla was smiling, because she knew she gave it her all.

And then everything got worse. But that all came after Karla got booted, so it’s not part of this recap! 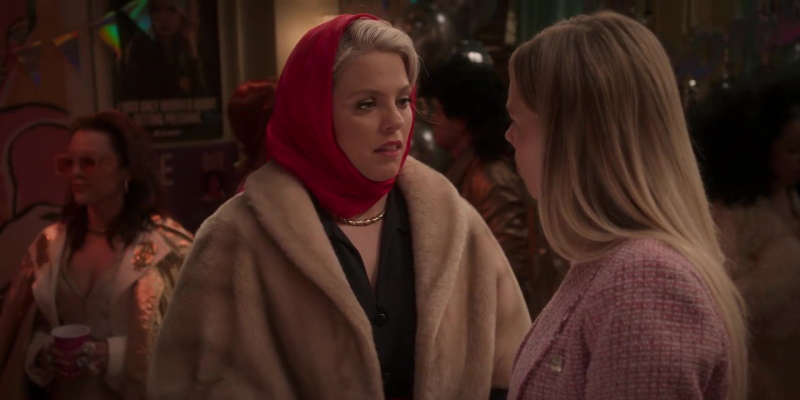 After getting Alicia’s texts about reconnecting, Leighton’s confused about what to do so she does what most people would do: she takes it to the friend group. Except, that’s not what Leighton Murray does…or used to do, anyway…she doesn’t go to her friends for romantic advice (in fact, it’s why she’s dumped by her high school besties in the show’s first episode). But Essex has changed Leighton…and so here she is, opening up and asking for advice. Growth, you love to see it.

The girls are stunned by the request but Kimberly urges Leighton talk to Tatum about it. Leighton shouldn’t see Alicia behind Tatum’s back if she truly cares about her. It’s good advice — advice that Kimberly would’ve done well to take herself, it turns out — and Leighton approaches Tatum about it during Pilates class. Tatum insists she’s cool about Leighton reconnecting with her ex, after all, she’s friends with a lot of her exes, including the Pilates instructor. I’m not sure I buy Tatum’s indifference but Leighton does and reconnects with Alicia (and Ginger! and Tova!) later at the women’s center.

The exes settle into an easy, flirtatious rapport, as they prepare care packages for trans youth. Leighton cracks jokes about the women’s center and Alicia, Ginger, and Tova rib Leighton over her coming out hoe phase. They mention the upcoming fundraiser — a costume party, natch — and invite Leighton to come. Leighton agrees but asks if she can bring a guest since she’s “sorta been seeing someone.” The unmistakable look of disappointment flashes across Alicia’s face but she masks it with a well-timed joke and an invitation for Leighton to bring her new girl along.

Given her reaction to the comedy show, I’m surprised that Tatum shows up to the fundraiser at all. She comes sans costume — though, hilariously, Leighton wonders if Tatum is dressed as Elle Woods — and doesn’t last long among the “gen pop.” She is snooty and judgmental…everything that Leighton used to be but isn’t anymore…and it provokes a fight and an off-screen break-up.

While I saw their break-up coming from the beginning, the pacing of the story — of both these episodes really — just felt off. Like the writers crafted a season long arc and then realized how little time they had left to tell their story so they just hit fast-forward. Everything feels rushed. Moments that should resonate, don’t…emotional beats that should’ve been included, aren’t….because TSLOCG did a terrible job pacing their story.

To wit, when Leighton’s mom shows up on campus for the Kappa Spring Festival, it should be a big deal. They’ve always had a contentious relationship and I’ve been waiting for the moment when this new version of Leighton clashes with her mother, who shaped Leighton in her image…but it never happens. Leighton doesn’t come out to her mother, her father tells her mom…and there’s no blow-up about it…her mother did the reading and comes to Essex ready to affirm Leighton’s sexuality and her love for her daughter. Now, granted, sometimes it happens like that…sometimes, the world we imagine while we’re in the closet is far scarier than the actual world…but when it comes to Leighton’s mom, it strains credulity.

And if that weren’t bad enough, Leighton quits Kappa — after being elected social chair and being offered a space in the sorority house — and her mother just accepts it? Just like that? After wanting it for Leighton all this time? I mean, it’s a great ending for Leighton but because none of it resonates because the show just fast-forwarded past the hard part — the tension, the fights, the anger — to get to the good.

The good includes a $30k check from Leighton’s mother to the cash-strapped women’s center which Leighton passes onto Alicia at the last Theta party of the year. Overjoyed, Alicia kisses Leighton and then pulls back and apologizes. But Leighton insists that it’s okay, since she and Tatum broke up, and pulls Alicia back into a kiss. Again, there’s no time to do any of the hard stuff — like interrogating the hurt from their past break-up — TSLOCG just wants to get to the good…at least for Leighton.

“So, I have some news,” she announces the next morning over breakfast. “Alicia and I are back together and, I’m not going to lie, I’m really happy about it.”

And while it’s hard to resist the bright smile that lights up Renee Rapp’s face when she says that, I wish I could share her happiness. Maybe next season?