All I want for Christmas is a stable sapphic (extra points if Black) couple to have a leading role in a holiday movie from a major studio where their gayness isn’t the point but is hella fun to watch, where their banter is cute, and if you’re feeling generous, please put one of them in glasses.

Say hi to Vixen for me!

I love Christmas movies. They’re cheesy and warm and familiar, but sadly they are overwhelmingly straight. So as soon as I heard Javicia Leslie and Jojo Gibbs were playing sapphic wives in a Prime Video Christmas movie, there was no question in my mind I was tuning in. Plus, bonus Shay Mitchell! 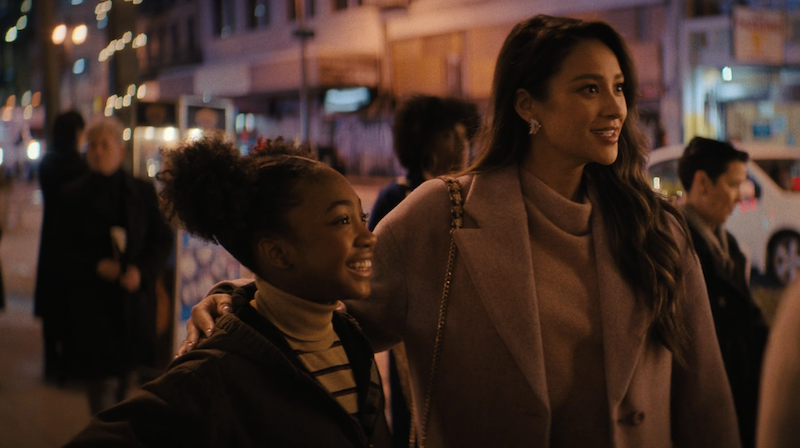 “I know Nathan from Insecure is cute and all, but why can’t I be kissing Zoey Deutch?!”

Reader, my hopes were not high, but when I settled in to watch Something From Tiffany’s, I didn’t expect my very real and definitely authentic above letter to Lesbian Santa to be answered so quickly. Now, did we get a stable married couple with chemistry and cute banter and one partner in glasses?? We sure did! Were they a major part of the movie? Unfortunately, they were not, HOW’MEVER! I refused to let that stop me from thinking about the soft and cute and fluffy activities that we didn’t get to see them delight in on screen while a whole bunch of straight mess happened. But I’m getting ahead of myself. First, a quick synopsis!

Something From Tiffany’s starts off with Ethan and his daughter Daisy (played by Leah Jeffries and who is the real star of this movie) shopping at Tiffany’s for an engagement ring for Ethan’s girlfriend Shay Mitchell (Vanessa I think? Look, I’m just calling her Shay Mitchell). At the same time, a very rude and distracted white man named Gary (because of course that’s his name) is shopping for a more affordable (and honestly, impersonal) blue box gift for his girlfriend Rachel (Zoey Deutch).

Gary cannot be bothered to pay attention to anything other than his phone, so when homeboy walks out of the store, he gets hit by a car (he’s FIIIINE). Ethan rushes out to help and in the mayhem, he *gasp* accidentally swaps Tiffany bags with Gary.

As you might expect, shenanigans ensue once Gary and Ethan realize they’ve swapped gifts. Gary and Rachel end up engaged, and instead of the ring, Ethan gives Shay Mitchell a pair of earrings that don’t exactly scream, “will you marry me?”

(Real quick! This is unrelated to almost anything, but as a publishing professional I am uniquely qualified to determine that the actual most unrealistic part of this movie is that the Black publishing executive Ethan meets with has an all-glass corner office at the named publisher. Propaganda, I tell you!)

The tl;dr for the rest of the movie is this: Ethan and Rachel begin to question their existing relationships before falling in admittedly very adorable Christmastime love thanks to some meddling from a certain Tyler Perry Wig-wearing lesbian. 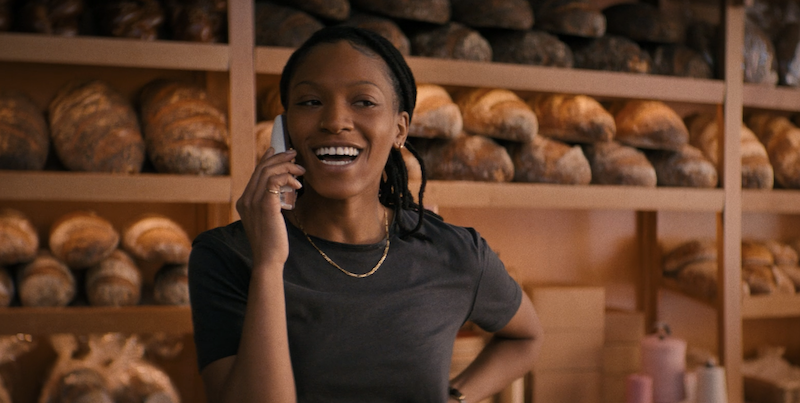 And that lesbian is Rachel’s best friend Terri, played by Jojo Gibbs. Terri is Rachel’s business partner, best friend, and founding member of the “Gary Sucks Why Are You Still With Him?” club. She is funny, supportive, and possibly most importantly, she accurately predicts every single time Gary proves to be a selfish partner.

When Rachel first discovers the famous blue box among Gary’s things, she calls Terri for advice and we’re then introduced to Terri’s wife Sophia, played by Javicia Leslie (in Glasses)! During the call, Terri reassures Sophia that she will obviously tell her everything the second she’s off the phone, in a way where you just KNOW this happens all the time. And that’s when I knew this was going to be the healthiest relationship in this whole dang movie. They’re having fun! They’re gently ribbing each other! They are constantly armed with hilarious one-liners! They’re grateful to not be in a relationship like Rachel’s!

It probably goes without saying, but I wish we got to see more from Terri and Sophia. Jojo and Javicia’s chemistry and banter are so fun, and they bring such a playful quality to Terri and Sophia’s relationship. Because of that, I couldn’t help but wonder what those two were probably up to while Gary was being terrible and Ethan and Rachel were heterosexually flirting their way around New York City.

I LOVE THEM, YOUR HONOR

I mean, come on! We already know Javicia is down for a good TikTok dance! Imagine how adorable the two of them would be!! I’m just saying, Something From Tiffany’s was cute and all, but we deserve more J & J!