Welcome back to So You Want To…the column that is 40% about fashion and 60% my flights of fancy! We’re gonna close out the year and wrap up our new romcom protagonists, all in one! Of course everyone has a holiday party to attend, because who doesn’t love a sparkly look and a little bit of romance? Everyone!

The Jet Setting Musician Who Won’t Let Anyone In 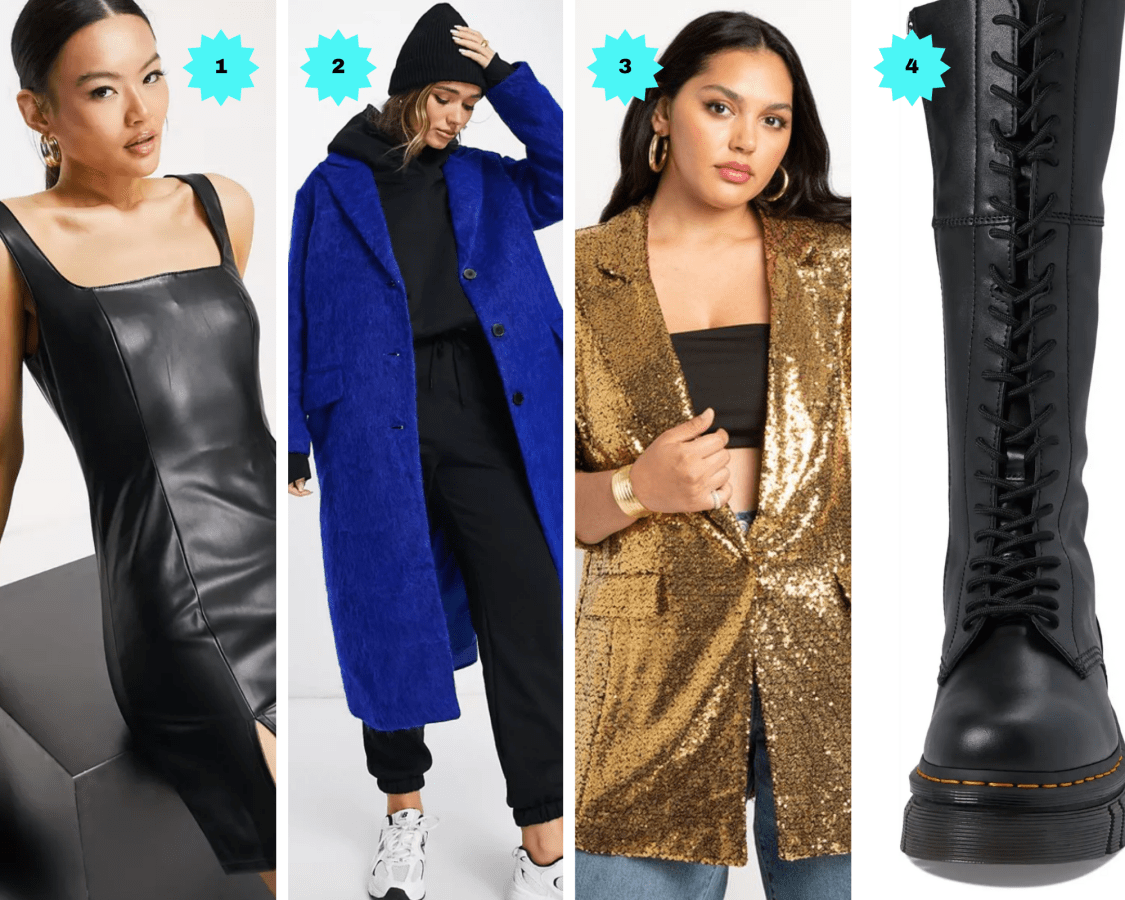 “This is your party, you have to go!” She was already dressed, leaning in the doorway of your closet, watching as you rummaged through piles of clothes.

“Technically it’s the label’s party, I’m just like…” you paused, frowning at a sparkling floor length dress before tossing it to the floor. “Decoration or something. The entertainment.” You had a memory of a gold blazer, something long and sparkly. That could work. Was it long enough to forgo pants entirely, really give Eric a heart attack? You started digging with renewed vigor into the furthest recesses of the walk in.

“Okay, what are we looking for?” She kicked off her heels and was looking at you with her hands on her hips expectantly. After you explained, she sighed with a mixture of exasperation and amusement. “They did offer to send over a stylist, you know. That would have been a lot easier.”

“But this is more fun, right?” You asked with a grin, hoping it came off as charming.

“Yes, digging around a closet is exactly what I wanted to do tonight, who needs a fancy party?”

“Stick with me babe, and I promise you’ll never be without closet related adventures.” Something glittered in the corner of your eye, and you hooted triumphantly, brandishing your prize. “Fifteen minutes, and we’ll be out the door, I promise.”

She rolled her eyes, but kissed you sweetly before slipping her shoes back on. “I’ve heard that before.”

“I love you, you know that, right?” Your face flushed as you realized what you’d said. That was not your plan, you had a whole thing set up for later: you were going to dedicate a song to her during the party, then slip away for some champagne and privacy and then tell her you loved her for the first time. Not half dressed in a ransacked closet. But the flush on her face and the way her eyes glowed made you think that maybe this was just right.

“I love you too,” she whispered. “Now get your ass dressed.” 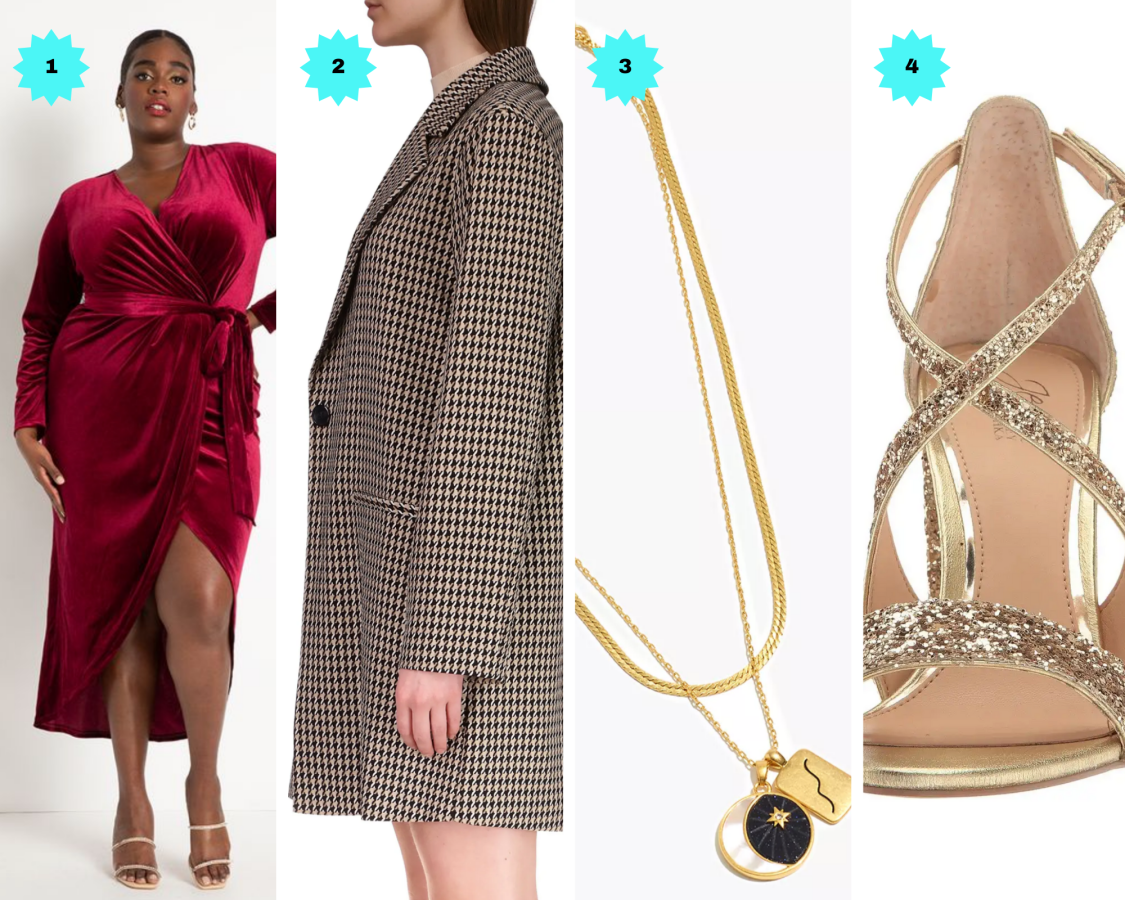 You had always loved this time of year, so when Carmen suggested throwing a holiday party at the store, you agreed without a second thought. It was possible you had gone overboard buying an actual Christmas tree, but it was the perfect size for the corner by the window, and even Carmen admitted it was worth hauling it from the lot. It looked beautiful all lit up, even if it was half decorated.

“Have you lost your mind?” you asked in mock horror, as they lifted a giant, gold and blue bauble to add near the top of the tree. “The big ones go on the bottom, and they get smaller as they get to the top.”  You snagged the offending ornament from their hands and nestled it safely in a proper spot.

They laughed, breath warm on the back of your neck. “You have more rules about tree decorating than anyone I’ve ever met.”

“They’re not rules,” you protested. “It’s just common sense. Who wants to look at a lopsided tree?”

“Oh really? Well what about the lights? It took me hours to get those right.” They wrapped their arms around you and squeezed affectionately.

“That is,” you began, trying to sound dignified and unaffected by their closeness. “Because inner illumination is one of the most important parts of Christmas tree decor.”

“You’re on your way.” You wiggled out of their grip, laughing as they pouted. “Next year, you’ll be able to do it on your own.”

“Would you two wrap up all that PDA already?” Carmen called from behind the register. “We’ve got an hour to go before people start coming, and you are taking forever with that tree.”

“Next year,” They said, handing you another box of ornaments. “It’s a date.”

The CEO Who Is Too Busy To Even Think About Dating, Are You Kidding? 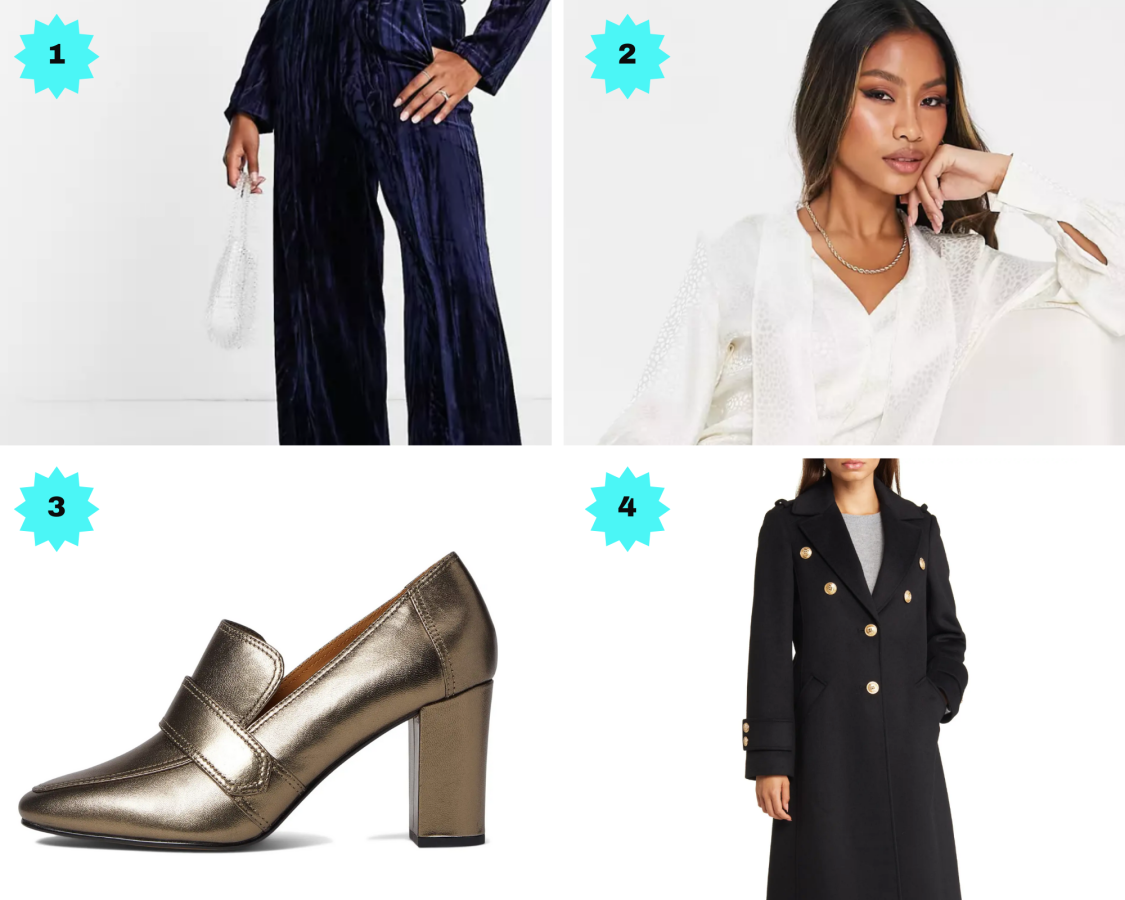 It made sense that your clients wanted to celebrate a job well done when the project was finished. You assumed it was your bad luck that made them insist on hosting that celebration at the same country fairgrounds, now done up for some silly local winter festival. There was still no service, and it was so cold that drinking the mulled cider and bourbon they’d offered was the only thing that helped warm you up. At least the cows were spared this time.

That was the reason you were a little…more tipsy than was perhaps acceptable for a work event. The bourbon plus the sudden, surprising warmth of the barn when they had held dinner had you feeling a little dizzy, so you slipped outside with a bottle of sparkling water. The cold air felt wonderful, bracing, even. The dizziness started to fade, and you started to enjoy yourself, out here in the country, snow no doubt fucking up your leather boots.

“Feels nice out here, doesn’t it?”

You weren’t surprised that she had followed you out here. You had been avoiding her ever since that night when the deadline was breathing down your necks and the two of you had decided on a rather…unprofessional way to blow off some steam. It had been a mistake, you were sure you both knew that, so there was no real reason to discuss it. You’d done your work well and the clients were happy, and your little dalliance didn’t matter in the long run.

Even if you hadn’t you stopped thinking about it.

“So are you just going to pretend nothing happened? Is that the plan?” She asked casually, not a hint of malice or derision.

You sighed. “It was…a mistake. And unprofessional. We’re not working together anymore, we can just…go back to how we used to be.”

“Snapping at each other every time we crossed paths and pretending it isn’t because we are dying to rip each other’s clothes off?”

A hundred responses rushed to your mouth, but you were cold and still kind of drunk and saying anything reasonable felt too tiring. “I guess, yeah.”

She stepped closer, pressing you against the barn walls. The rough wood snagged on your coat, another casualty of spending far too much time outside. But all thoughts of coats and boots and weather damage flew out of your head when her eyes glittered and she swept her mouth over your jaw. “I have a much, much better idea.” She whispered.

“Still trying to one up me, even now?” You murmured, trying not to give away how fast your heart was beating.

She kissed you before you could respond. It was probably for the best.

The Pro Soccer Player Who Is Addicted To Breaking Hearts 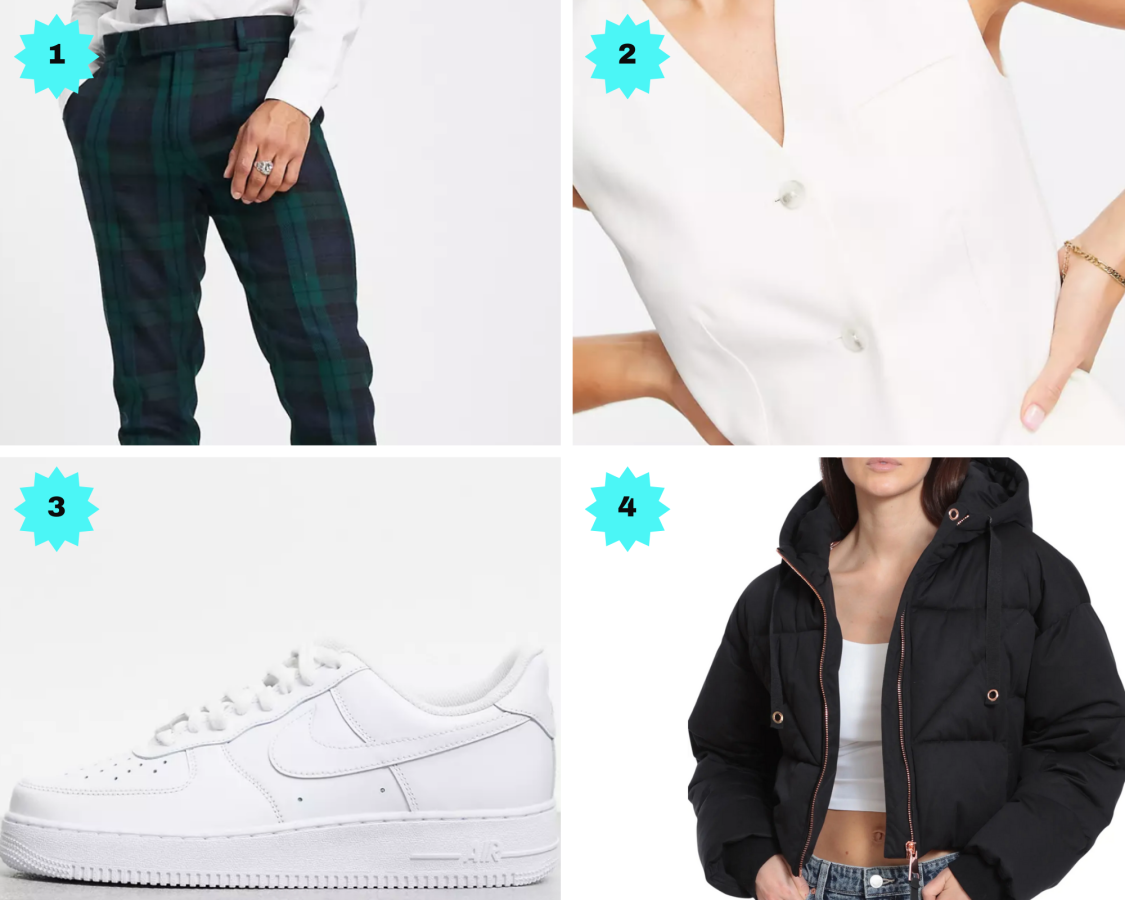 “Wait, Hanukkah starts this Sunday!” You said, raising your phone. “We’ve gotta do something to celebrate!” You thought for a moment. “Latkes? They’re a thing, right?”

They laughed from their spot on the couch, feet pressing into the side of your thigh. “Yes, latkes are a thing. But I told you, Hanukkah is not as big of a deal as Christmas is, they just share a season.”

“I know, but still, we should like, get festive! Spin a dreidel? Light a candle?” You were just grasping at straws now.

“The fun goes out of a dreidel pretty fast after the age of like, six.” They said. “And it’s not like I’m super religious or anything anyway.”

“You’re coming to my parents Christmas party tonight, I don’t want you to feel like I’m ignoring your culture,” you said.

“And you are very sweet to worry about that.” They got up and stretched, grinning down at you. “But I have lived through many Christmas parties, I think I can manage another one.” They swatted your leg. “We gotta start getting ready— I want to pick up some wine for your parents on the way.”

“They are going to love you more than me,” you muttered.

“Of course they are, I am very charming.”  They raised an eyebrow when you snorted. “What! I am!”

You tugged them onto your lap, ignoring their protestations. “We can be late, they’re my parents.”

“This is my big meet the parents’ debut, I can’t be late for that!”

“Only if we can make latkes on Sunday.” You pouted, just enough to soften them.

You felt more than saw them roll their eyes. “You aren’t going to let this go, are you? Yes, we can make latkes on Sunday.” They laughed as you cheered, tangling their fingers in your shaggy, off season hair. “We can even light some candles, I’ve got a menorah around here somewhere.”

“Hell yes, now we’re talking.” You dropped a kiss on their head before letting them go. “Now let’s get ready for a party.”

Join A+!
Related:#affiliatemarketingso you want to fashion