Hello and welcome to the fifth recap of the third season of The L Word Generation Q, brought to you by the same network that brought you the original L Word, a thrilling caper about a masc lesbian hairstylist who, over the course of a single afternoon’s gig at a lavish SoCal wedding venue, managed to have sexual relations with two bridesmaids and the mother of the bride while her best friend flitted about the festivities in an iconic and enduring garbage bag wedding dress.

Thank you for joining me here today for this L Word Generation Q Episode 305 Recap. This episode had some fun parts and some less fun parts and some confusing parts, just like the noted Jenny Schecter memoir “Some of My Parts.” It also took me a billion years to write for some reason, an effort that is likely not reflected in its quality. But most importantly NEXT WEEK IS GONNA BE THE MUSICAL EPISODE AND I AM SO EXCITED FOR IT!!!!!

Also for A+ members: me and Drew and Analyssa are doing a watch-a-long of this episode at 6pm PST today (Friday, December 16th) on Discord!

We open at Chez Alice, where our favorite fashionista is about to wear a $300 sweater and $600 pants to a cinema date with Shane, an event that will involve consuming buttery popcorn and soda pop in the dark. Unfortunately her beloved gal pal Taylor will not be attending because she has to work at her Liberated Coffee cart. Coffee doesn’t liberate itself, you know? 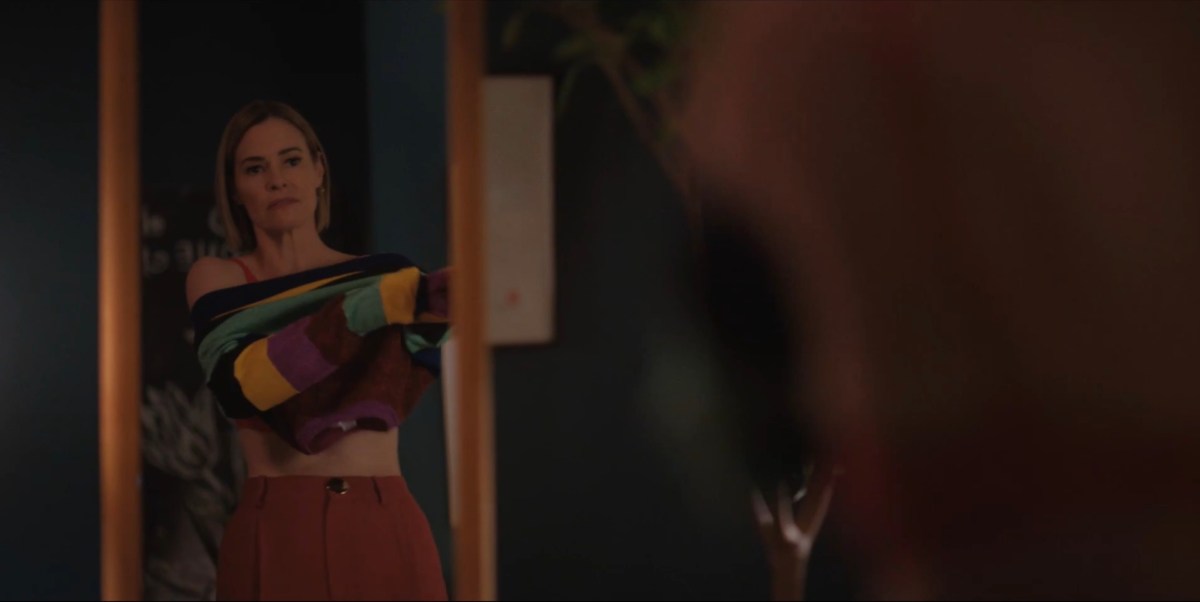 🎶  Hello, can you hear me? I’m in California dreaming about who we used to be 🎶

At the Shess Shack, Shane — who’s packing up Patty’s things for what I presume is a move to the nursing home — hangs up on Alice as Tess emerges from downstairs, deeply engaged with her portable mobile device. She’s uninterested in speaking to Shane or asking her any follow-up questions about what it was like to hook up with Kehlani.

Here, I framed all of our broken dreams for you

But then, nature’s restless eye intervenes upon the stony silence simmering between these two lesbians! A rogue bumblebee begins darting about their kitchen and Shane is called upon by Tess to capture it. Amid this hubbub, we learn that the relationship has entered “Oh We’re Doing Bad Faith Assumptions Now” territory — Tess yells at Shane not to kill the bee (they’re endangered) and Shane’s offended Tess would assume she intended to kill the bee. (She doesn’t kill the bee)

MISS, FOR A DOLLAR, NAME ONE MAN

Anyhow, bada bing bada boom they release the hectic insect into the great outdoors. Shane’s unclear why Tess was being so extra about the bee —

Shane: Are you alright? We survived.
Tess: [Sigh of relief]
Shane: Are you allergic? I’ve just — I’ve never seen you act like this.
Tess: I don’t know, maybe. [Pause, walks to the door, gestures at plants] Those plants need watering.

But unfortunately, Tess cannot open the sliding glass door that leads back into their home because it is locked. They are locked out with nary a cell phone between them! Tess yells for the neighbors — only Shane knows their names — to no avail, and Shane foolishly attempts to inspire their dog to learn basic motor skills and open the door.

Alright then, Tess sits down. You wanna talk? It’s time to talk.

Does anybody know what happened to the swimming pool that used to exist on Shane’s balcony estate patio (I don’t know the words for the parts of a rich person’s home)? Asking for a friend.

Cut to the hallowed halls of California University, and into a dormitory room, where Angie’s pondering an offer, via text message, from her grown adult professor, for them to “go away in a few weeks.” Hopefully he’s planning to book them a room at the St.Regis Hotel Toronto, so Bette and Tina can come over and smack him in the face.

Before Angie can confirm or deny her approval of this terrible idea, Bella arrives home: she slept with a boy who has a cute butt in his baseball pants and now Bella has a condom stuck inside her. Honestly I’m sad it wasn’t a 7-day old tampon.

We then venture back to FiSoMiMar’s, where Finley and Sophie are having The Talk about Sophie having sex with someone else! Sophie says she met Dre on Hinge, which she joined after Finley told her she was leaving rehab for Sober Living “up in the bay” and Sophie got lonely. When Finley asks if Dre is hot, Sophie says “no,” which is not only a lie but a risky one! Lesbianism is a niche activity and Finley works at a lesbian bar, there’s absolutely a 0% chance she’ll never meet Dre in real life!

Finley, these answers don’t work if you’re gonna ask me follow-up questions, this is a face-value conversation

Furthermore, Sophie says they only had sex once but hung out twice, which feels like a contradiction to Maribel referring to Dre as the person Sophie was “fucking,” actively. I’m curious why Sophie’s lying — to protect herself OR because you can lie about a fact to get at an emotional truth OR because she doesn’t know what else to do besides lie OR is this a misguided attempt to protect Finley’s sobriety? Regardless, I do like Sophie’s shirt and appreciate that she prepared a charcuterie board for the occasion.

Here, you might be able to swallow my sexual activity with another person a little easier if you are swallowing a wafer cracker with fig jam at the same time

We then cut out to some Los Angeles B-roll before returning to the very same location upon which our story last took place, FiSoMiMar’s, but with a new storyline to address on the first floor of their gorgeous villa: Micah told his Mom about Maribel and she’s totally cool with it!

Maribel suggests they celebrate, and Micah agrees: perhaps they could look for a sperm donor? Mari was gonna suggest “organizing the tupperware drawer” so, yes, this plan sounds even more exciting!

We return to the Shess Shack Patio, where things are not going well. I’m going to just declare this a Lesbian Squabble for the record and then move forward with my recap. 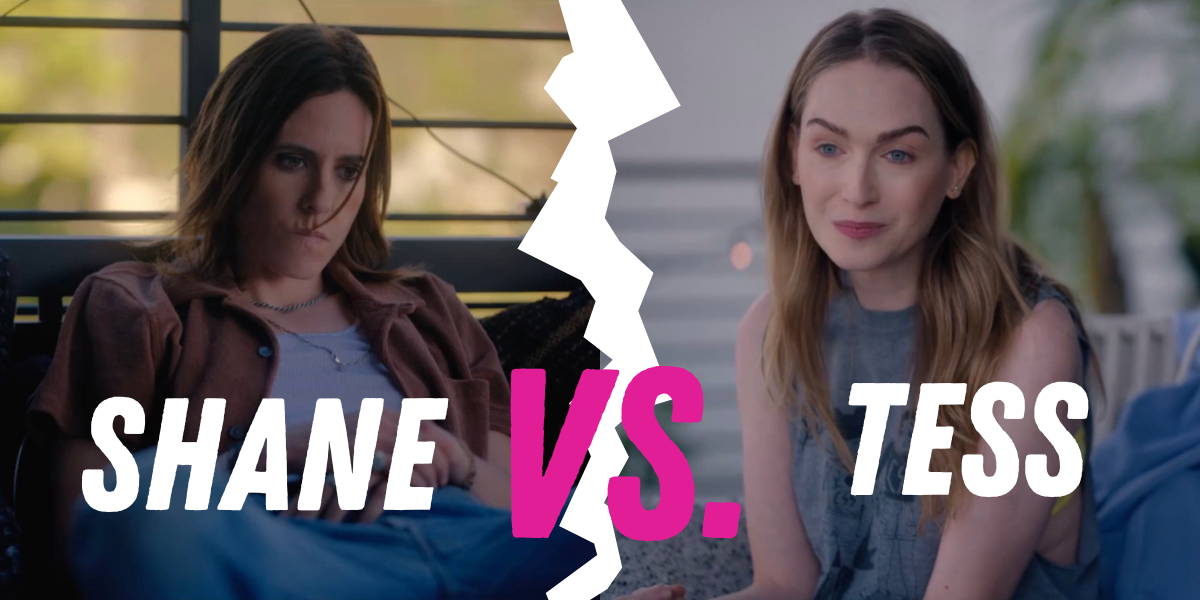 Lesbian Squabble #9: I’m Like a Bird, I Always Fly Away
In the Ring: Shane vs. Tess
Content: [Ongoing]

Tess knew about Shane’s bad reputation but dated her anyways, and now wants to know if this is really who Shane is. Shane says she didn’t mean to hurt Tess, and Tess wants to know why she did it. Shane doesn’t know why, it’s just an old pattern, like calico or plaid. Tess suggests Shane take this Locked Out opportunity to think about her life and her choices.

Back at California University, Bella reveals that she puts in a tampon like she’s about to mount a wild horse and also she cannot get this condom out because everything is so slimy! Angie uses google to discover the possibility of a fix enabled by a hooking motion and Bella requests Angie’s hands-on assistance.

Meanwhile at the Dana Fairbanks Memorial Tavern, Dani is for some reason listening to a voicemail on speakerphone on a public street — and said voicemail reveals that sadly, our hot bad friend Roxy has caught the first airplane to Costa Rica. But as one love flies off into the sky, another appears: it’s Dre, here to save Dani from being plowed over by an errant scooter.

They stand there in the damp evening air, gazing into each other’s eyes, overwhelmed by the serendipity of it all and by how hot they are separately and potentially also together. Probably also Dani recognizes this actor, Carmen LoBue, from their appearance in the 2011 Autostraddle Calendar!

Dre is forward (yet another hot thing about Dre) — they say they feel like they should kiss Dani right now but they won’t ’cause it’s real life and not a rom-com. Luckily for all of us, Dani is actually feeling very romantic and comic today and she leans in for the kiss!

Meanwhile, just inside the Dana Fairbanks Memorial Tavern, Finley’s looking incredibly hot, feeling frisky, and is ready for some funny business in the backroom if Sophie wants to meet her there in, say, 15 minutes?

Then Dani arrives, flushed from her rom-com moment, exuding the unmistakable energy of a person who could’ve had her foot run over and instead got her heart plowed into, but in a hot way. Sophie loves this for Dani and so do I. Then they discuss their mutual affection for the classic 2001 romantic comedy,The Wedding Planner, starring Matthew McConaughey as a handsome pediatrician who saves Jennifer Lopez from a near-fatal collision with a runaway dumpster after her Gucci heel gets stuck in a pothole!

🎶 Oh, give me a home where the buffalo roam, where the deer and the antelope play 🎶

We return to Tupperware City. “Wow, we have a ton of options here,” Maribel says while looking at a website of sperm donors, which is the most unrealistic thing anybody has ever said on this show!

Unfortunately for all of us here, “finding a sperm donor and attempting to conceive without a partner who produces sperm” is now a process I am intimately familiar with and therefore I have about ten thousand questions about the representation of this situation vis a vis Micah and Maribel, but I will withhold them at this time so that I can get this recap published before sunset.

Meanwhile at the cinema, Alice has her two buckets of popcorn and is finding her seat in this mostly-empty movie theater set. Shane, of course, is nowhere to be found and isn’t answering Alice’s texts, which doesn’t alarm Alice quite as much as it ought to, because there are bigger fish to fry here: amongst the smattering of extras hired for this scene, Alice spots a familiar face she was not expecting to encounter: IT’S TAYLOR, CLEARLY ON A DATE!!!!