The murder of a Durban lesbian started something in South Africa. And even if change isn’t easy to come by regarding hate crimes, lesbians, and South Africa, the active movement to end hate crimes in the KwaZulu-Natal region is another testament to the strength of the LGBT community and the resilience of its leading activists there.

Khumalo, a lesbian from Durban, was found buried in shallow ground by her parents’ home. LGBT activists reacted to her death with a demand: that their government begin to take hate crimes seriously. Corrective rape is a huge problem in the region, but the government won’t take action on it – or even recognize it. Violent hate crimes are too common in South Africa for anyone – especially the LGBT community – to sit silent. And because LGBT activists met with government officials and then saw no progress, impatience is rising.

Lexit, an LBT rights organization in the region, claims the murder of Khumalo is linked to her sexuality. The group organized a protest outside Durban City Hall on May 16. Thobeka Khoza, the chairwoman, was outraged by the death. “Lesbians are being raped and killed, yet nothing is being done,” she said.

Eight lesbians in the region have been raped and murdered recently, and none of the attackers have been caught, according to Khoza. But police say they have not found a connection between Khumalo’s murder and her sexuality. How convenient! To help them find the connection, LGBT organizers tried to channel their anger into action and raise awareness of the need for government support in ending hate crimes. 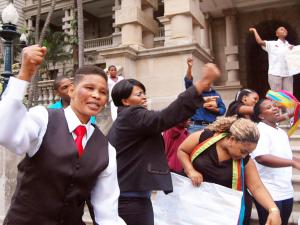 “We will continue to protest until something is done about this. In KZN, at least eight lesbians have been raped and murdered but their attackers have not been caught,” Khoza said. “The government is not protecting us and our rights.”

Lexit wants prosecution for hate crimes to accompany atrocities like these. The White Flag Campaign also offered their support to the protest, and representatives urged the government to take action against hate crimes.

The Durban police said Khumalo’s sexuality does not affect the case, and that the government is concerned, really:

“All cases are given the same priority and a human being is a human being. Both nationally and provincially, crimes against women and children are regarded as priority crimes and viewed in a serious light.”

Are you convinced it’s all okay yet? And hey, where the fuck is the South African Task Force on Corrective Rape these days?

The lack of action by government officials, and by police in communities affected by these violent hate crimes, is seriously disturbing. And until LGBT voices are not just heard, but understood and taken seriously, it won’t end.

South African violence against the LGBT community, and specifically attacking lesbians, is a serious problem, and it sucks that all anyone can do is cross their fingers and wait for a response. It’s time for change in South Africa – now. No more waiting.

Sidenote: As we can only know/read so much from our laptops in the US and the way the media tells a story, we’re especially interested in hearing from our readers living in South Africa about this~