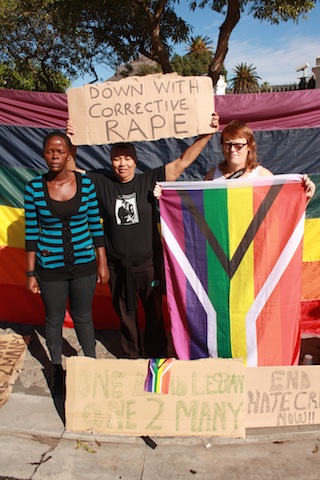 A May protest outside South Africa's Parliament. From change.org.

The government has been accused of not doing enough to help lesbians targeted for “corrective rape,” a hate crime in which men rape gay women to “correct” their sexual orientation or behaviour or punish them for preferring women. The new task team will begin operations on July 15, and will include six representatives from the gay community and six government representatives from the judiciary, police force, and department of social development. It will work towards changing current legislation, public awareness, and creating gay-friendly shelters. At a preliminary meeting earlier this week, a few of the options discussed included adding sexual orientation to a list of aggravating factors in sexual assault, which would make sentences heavier; using magistrate courts as equality courts; changing the minimum sentences for hate crimes and adding sexual orientation as a basis for hate crimes; and sensitivity training for police.

Under the current legal system, “corrective rape” isn’t classified as a hate crime. According to Ndumiso Funda, the the founder of Luleki Sizwe and one of the people working with the task team, this is a huge problem. In an interview with Audrey Brown from the BBC, Funda said:

“As I understand, as a black lesbian who grew up in that culture, [corrective rape has] been happening for so many years. and nothing has been said or done about that. There were other activists and other LGBTI organizations that worked around the issues but the government has never taken those [seriously]. […] The South African constitution is one of the highly respected and acknowledged constitutions and it says we are all equal; we’re therefore reminding our government to say that this was being promised and we voted for you so we need protection.”

The South African constitution technically guarantees every citizen the same rights regardless of “race, gender, sex, pregnancy, marital status, ethnic or social origin, colour, sexual orientation, age, disability, religion, conscience, belief, culture, language and birth,” which is a more inclusive list than that in the Universal Declaration of Human Rights. In practice, however, the sexual orientation part isn’t upheld as much as it should be, even though being gay is legal in South Africa. And attacks against gay people continue.

The task force is also a more specific response to the sexual assault and murder of Noxolo Nogwaza, who was attacked on the evening of April 23 after dropping her girlfriend off in Kwa-Thema township, near Johannesburg. While police have said they have not found any evidence of a hate crime, an investigation is still ongoing. Local gay rights activist Lydia Kunu disagrees, and told CNN, “Her attack is a case of corrective rape. Neighbours said they heard her attackers telling her, ‘We will take the lesbian out of you.’ They were mocking her and asking her why she acts like a man.”

While the online petition, which was started by Luleki Sizwe on Change.org, began in late November and had made some progress — including meetings with the government that led to it promising concrete proposals — by mid-March, it started to make international news after Nogwaza was attacked.

According to a report by CNN,

“In these cases, killing is the end of the spectrum,” said Siphokazi Mthathi, the South Africa director for Human Rights Watch. “It follows a trail of other problems — rape, violence, problem accessing health care and violation by police.”

Mthathi said it is hard to get an overall number of the people subjected to violence because attacks go unreported over the distrust for the judicial system.

“There’s a great deal of under-representation because they are going to face secondary victimization,” she said. “We’ve heard of cases where when they report a rape, the police tell them, ‘aren’t you happy that you got a real man for a change.'””

So far, there have been no arrests in Nogwaza’s case. Even if there were, and people were convicted, and even if “corrective rape” and similar instances of assault were classified as hate crimes with far harsher sentences, it might not be enough to solve larger social problems. According to the Human Rights Watch’s Dipika Nath, a LGBT rights researcher,

“Like sexual assaults of women in general, rapes and other violence against lesbians and gender non-conforming people have reached epidemic proportions in South Africa. If the South African government is committed to protecting the rights of all people equally, leaders must address the specific motives targeting the LGBT community in these crimes.”