Yep.  In an article posted last week about how violation of men’s and women’s “natural” roles is tearing apart marriage, Fox News used a random wedding photo.  The problem?  Upon closer inspection, as SheWire pointed out, the photo actually featured these lovely hotties — a lesbian couple from Alaska.  (Predictably, Fox yanked the photo.)

This delightful mishap brought the less-than-delightful article to the attention of the lesbian community.  But the article itself is actually worth looking at and thinking about.  It encapsulates a whole bevy of misunderstandings about how gender works, what the goals of the feminist movement are, and how to interpret statistical evidence. 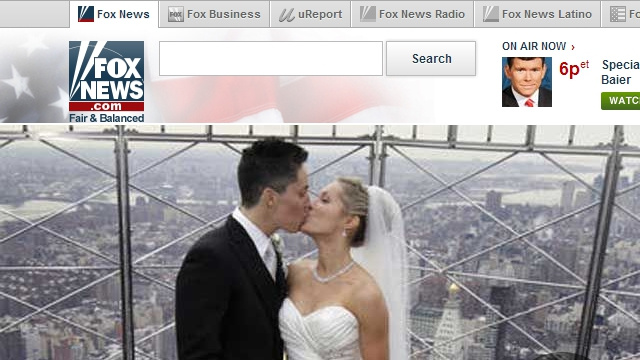 The article in question was penned by Suzanne Venker, author of How to Choose a Husband: And Make Peace With Marriage.  The column’s central claim is that the feminist movement is responsible for the supposed “decline” of heterosexual marriage.  Because women have been “told” that they are equal to men, they pursue goals ultimately incompatible with their greater desire to have a family.  As Venker says in the video interview posted above that column, “Women have become overdeveloped in their masculine side…  because they have been groomed for a life in the marketplace, rather than a life at home.”

See how easy life can be if you just ignore social processes and assume that all human outcomes are solely a product of personal choice?

Venker posits that the whole notion of “equality” is problematic. She writes that “the problem with equality is that it implies two things are interchangeable – meaning one thing can be substituted for the other with no ramifications. That is what feminists would have us believe, and anyone who contradicts this dogma is branded sexist.”

I don’t know where she got this notion of equality, but it’s not one I’ve ever heard.  I’ve always thought equality meant two people had the same amount of value, the same opportunities, the same status, the same rights. I didn’t know it meant we could just swap one person, willy nilly, for another. I thought it meant that I, a youngish white lesbian, and Thomas Sowell, a straight black 80-something conservative, each got one vote, the same right to counsel, and the same chance to protest a government decision, in a public location. Under Venker’s logic, equality actually means that you could swap Sowell in virtually any circumstance “with no ramifications.” To this nonsense, I doubt either Sowell or I would agree — and I don’t think it would make us racist, sexist, or any other “-ist” (any more than I’d be bucking feminist notions of equality by giving my seat to an elderly woman on a bus).

Venker’s argument would make more sense if we lived in a world where men and women weren’t socialized differently — a place where little boys and little girls were treated the same, where parents-to-be weren’t gifted with different sets of toys based on the sex of their child, where there were equal numbers of male and female role models in every profession, where women’s “formal” clothing didn’t constitute teetering heels and displays of breasts and skin and where there wasn’t one collection of traits associated with masculinity and another, entirely different one associated with femininity. We do not live in that world. And because we do not, we are foolish to assume that anything we do is just a product of biology.

Of course we are influenced by our genes. (Heck, all the socialization in the world didn’t stop me from being a dyke.) But our genes merely set the stage.  We grow into a version of our selves based on how we are socialized. A little boy jumps around and he’s told, “You’ll make a great basketball player!” A little girl jumps around and she’s told, “You’ll make a great dancer!” From day one, we are mired in social experiences — and many of these social experiences are heavily, heavily gendered. It is not as simple as parents forcing little girls to wear dresses or making little boys play baseball. Each of us is born with a hundred different possible, valid versions of our “selves” inside, and the collection of possible selves is different for each person.  But which version we actually grow into is a complicated dance between predisposition and socialization (and I’d wager that socialization is doing a lot of the leading).

On one level, arguments like Venker’s are easily dismissed because they seem so patently sexist — it’s easy to chuckle at someone who thinks society is going to hell in a handbasket because we’re ignoring biological destiny. It’s also easy to roll our eyes at the (arguably, and perhaps even thoroughly absurd) notion that women are being “groomed for the marketplace” and have overdeveloped “masculine sides.”

But I think it’s more invidious than that. By misstating and oversimplifying the arguments of feminist and gender theorists, and by downplaying or ignoring the vastly different ways in which men and women are socialized, Venker becomes an apologist for material inequality. Why, after all, should we work harder to equalize opportunity if existing disparities prove intrinsic differences? If equal rights on paper make opportunities equal, then anyone who squawks and protests about inequality and a need to improve the world is just engaging in a silly, anachronistic waste of time.

This essay was originally posted at Butch Wonders and has been republished on Autostraddle with permission.

Butch has written 2 articles for us.