I love watching horror movies. There’s a great rush of adrenaline that comes from sitting in a movie theater with a bunch of other people sharing in the build up and release of all that tension. It can even be an extremely therapeutic experience. I’m able to feel scared and get my heart pumping without being in any actual danger. When the movie is over I no longer have to be afraid. I no longer have to worry about what was on the screen. Recently, I watched Insidious Chapter 2 hoping for this kind of experience, and at first, I was having a ton of fun watching a throwback haunted house/possession movie. But then the characters said something that made me scared in a different way (and here come some slight spoilers). A few of the characters were in an abandoned hospital, and they walked into one room where a psychic said he could feel an especially strong source of energy. Another character, who used to work in the hospital said that she remembered the person who stayed in that room, and when she gave the reason that he was hospitalized, my heart sunk and I was immediately pulled from the fantasy of the film. She said that he was hospitalized for “attempting to castrate himself” which set off some major red flags in my mind. Those fears were realized when later in the film, we saw flashbacks where that man was being forced to dress as a girl by his abusive mother and then later when he dressed up like a woman to commit a series of murders. No longer was this just a horror movie with scary ghosts and spooky locations, it was a movie where someone, who to the uninformed eye was like me, was evil, was frightening and was violent.

The Bride in Black from Insidious Chapter 2

As the movie was ending, I sank down into my seat, hoping that no one would notice that I was trans. I was afraid that if someone realized I was trans, they might make the connection between me and the serial-killer-turned-ghost in the movie. After all, if you don’t know me, you might see me and (incorrectly) think that I’m just some man who is dressed up like a woman. According to the filmmakers behind Insidious Chapter 2, that makes me creepy, insane and dangerous. And they’re not the only ones who portray trans people (or cinema’s idea of trans people) this way. Unfortunately, this has become a tired old trope in the horror genre. The movies that use trans people or crossdressers as a scare tactic don’t bother to make a distinction between the two. Because of this, for many viewers of these movies, these characters have been their only pop culture reference points when a trans woman is mentioned. That means that when they hear that someone is a trans woman, they have a list of characters that are lumped into this general category of “women who are really men” and that category is filled with psychopaths and serial killers. 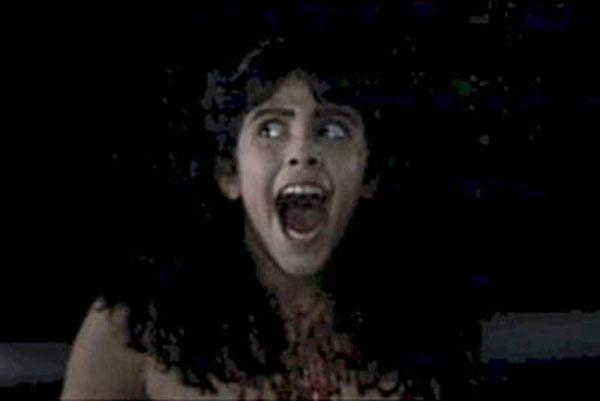 Three of the most notable examples of this are 1960’s Psycho, 1983’s Sleepaway Camp, and 1991’s The Silence of the Lambs. In Psycho, and again, here come some spoilers, motel owner Norman Bates has a split personality where he dresses up and commits murders as his mother. When we see Norman dressed as his mother wielding a knife with a twisted smile on his face we’re clearly supposed to see him as a terrifying figure. Not just because he’s been killing people or because he’s holding a giant knife, but also because he’s dressed like a woman, which is supposed to show just how crazy he is. Similarly, in the final scene of Sleepaway Camp, one of the campers, Angela, is revealed to be “Peter” who was raised as her dead sister by a cruel aunt and, as a result, has gone crazy and started killing other people at the camp. When we see her standing naked, covered in blood with her mouth agape, and we see that she has a penis, we see an image that is widely considered to be one of the most shocking and disturbing final scenes in horror movie history. Perhaps the most famous instance of a trans woman being used to scare audiences is The Silence of the Lambs. When we see serial killer Buffalo Bill in their most famous scene, it is meant to be one of the most jarring and disturbing moments of the film. We see someone who is presented to us as a man tucking their penis between their legs, wearing a wig made from a woman’s scalp, swaying and dancing to music. Growing up, I remember many times hearing that this was one of the strangest and creepiest scenes in modern film. This action of putting on makeup and a wig, tucking and trying to look as beautiful and feminine as you can is something that a lot of us trans women can relate to. It’s something that a lot of us trans women have done. And here it is being presented as the epitome of horror.

As you can see, several of these movies are considered classics, and for good reason. Psycho and Silence of the Lambs have incredible acting, great direction, they’re intensely scary and they’re incredibly influential to the films that followed. These movies aren’t just little films made by no-name directors and actors. One recent movie that borrowed heavily from Sleepaway Camp, House at the End of the Street, stars Jennifer Lawrence and Silence of the Lambs won Jodi Foster an Oscar for her acting. Insidious Chapter 2 had the biggest opening day box office in September history and Psycho was directed by Alfred Hitchcock. This makes them perhaps more dangerous for trans people. Because they are so influential and so many people see them, they help widely spread the idea of the “scary transsexual.” The characters in the movies are icons of American film. It could easily be argued that Norman Bates and Buffalo Bill are two of the most famous trans characters in all of pop culture. It’s dehumanizing to realize that when you tell someone that you are transgender, there’s a good chance that the first people that will pop into their mind is the villain from a horror movie.

Another shared feature of these films is that they portray trans women as being seriously mentally ill. In basically all of these films the murderer either dresses like a woman because he is “crazy” or they have become “crazy” as a result of them dressing like a woman. Silence of the Lambs and Dressed to Kill, which are the only movies that use this trope to actually feature characters that we know identify as trans, heavily rely on the idea that trans people are mentally ill and that is the cause of their transness. In fact, it is the idea that these transgender people are insane that drives the entire plot of these movies. The same insanity that causes them to be transgender is the thing that causes them to become serial killers, and causes them to be seen as frightening. This has been a very popular narrative for those arguing that we shouldn’t accept and support trans people. While it is becoming less and less popular and accepted, there are still places that promise to “cure” you or your child of their transness. Hate groups argue that transgender people should be institutionalized and even will say that bad parenting can traumatize children and lead to them thinking that they are transgender. Horror movies like these just reinforce these ideas in the overall culture.

Buffalo Bill in The Silence of the Lambs