We’ve had an internet crush on Rich of FourFour for some time now, not least because he is just as obsessed with RuPaul’s Drag Race as we are and his America’s Next Top Model recaps have been going strong & brilliant for our entire extended adolescence/thirties. Also, Pot Psychology.

Rich has recently left his job at VH1, which means entering a new realm where complimentary (or at least not openly derogatory) coverage of its content is not mandatory. In that spirit, he’s sharing for the first time an email exchange he had in his capacity as a blogger with them – a host of a VH1 show who contacted him in outrage over some “gay stuff” that he felt he “fell victim to” in Rich’s writing. (Sidenote: Rich is gay.)

Basically this person referred to a male contestant as being exceptionally cute and Rich made a joke about this person having a crush on the contestant. That’s “how recapping works.” Everything is fair game. That’s it.

Rich has posted the whole exchange, with identifying details removed (though it’s not really difficult to figure out who it is, we’ll refrain!).  The reason for posting it is based on a few things including “the belief that if you see something even remotely anti-gay, say something.”

Subsequently, in that same spirit, we’re talking about it here. We recommend you go read the whole thing though.

Some gems from the Secret Mystery Former Host:

“To get to the point, not cool with all the “gay” stuff… Whatever the reason don’t do it again. Not cool bro. I’m not so self absorbed as to not make fun of myself, but the sexuality this is not only “hack” its also out of bounds…”

“Now for the first time in my life Gay [people] are coming up to me on the street and hitting me up on the internet. Yeah, don’t really need that in my life guy.” Don’t perpetuate and more homosexual energy please when it relates to me.

Maybe one day we can laugh about this over a peach Martini (oh wait that’s kinda gay huh)… I mean a shot of rot gut wisky, however until then let’s try and get through these tough economic times with respect and civility. Just like Octumom [sic].

When I wrote about you, I was not responding to anything innate or characteristic about you, but to your words. It is my job to make sure my humor is as circumstantial as possible. I’m not the “hack” you’d like me to be. I think about this shit, every word of it.

Anyway, I actually never insinuated that you were gay, even, just that you took a shine to this one particular person. I don’t know what you sleep with and I don’t purport to.

A gay person knows on a fundamentally true level that there is no shame or embarrassment in being gay, but is it okay to capitalize on the insecurities of those who still do? We’d say yes because Rich isn’t capitalizing on it so much as he’s refusing to consider homophobia imposing restraints on his freedom of expression.

Where does that fall, in the hierarchy of social interaction? Does that brand of humor come from a homophobic place carved out in our cultural consciousness, or from a new and different place where the laughable thing isn’t homosexuality, but the fear of it?

Interesting also is Rich’s assertion that the person’s threats to go above Rich’s head to VH1’s officer’s won’t work: “I’ll gladly explain what I explained to you to my boss and anyone else at VH1. Perhaps one of the several gay men in charge? Welcome to Hollywood. It’s gay here.” While it’s unfortunately well documented that there are plenty of gays willing to throw their own community under the bus for the sake of job security or money or mainstream acceptance, Rich is right: gay people have risen to high enough levels of authority (at least in the entertainment industry) that crying homosexual slander won’t necessarily work anymore.

Because it’s not slander, not really. Which is ultimately the most resonant point of this exchange:

“it’s offensive to me that you think I should be able to feel sympathy for someone who feels they’ve been accused of being gay. You are philosophically aligning yourself with people who affected me profoundly growing up, people who preached that gay is bad”

Which The Person didn’t appreciate:

“…you made a major leap in logic philosophically aligning me with people that preach that gay is bad.”

This is one incident didn’t end up going anywhere; [redacted] apparently did try to bring it up to someone at VH1, to no avail. Because it’s stupid. It’s a stupid complaint and the fact that he’s making it at all says more about him than the joke ever did. Would this have been different ten years ago, before the lesbian cheerleaders on TV were allowed to have feelings, not just hot steamy choreographed sex, and the genderqueer pansexual characters not only exist, but are pursued by their peers?

The other, less interesting side of this is simply the reality of the relationship between Reality TV and the bloggers who recap it — “characters” frustrated with how they’ve been portrayed on the show often project their rage onto recappers because approaching the producers of the show is a futile mission. They hope recappers can make it right, but they signed up for the whole thing when they signed up to be on reality teevee at all.

In [redacted]’s first email to Rich he pretty much reflects that ideology head on: “These contestants know by now when they go on one of these shows that they can fall victim to editing or the bloggers pen, but as [redacted role] I always felt I was above that.”

Did Jayla email Rich when he referred to a Jayla/Kim fight as Dyke Drama? Did Joslyn email Rich when he called her pose “the human realization of everything a gay wide should be”? What about Annaleigh and Marjorie, about which Rich asked: “What is this queer little love affair that’s blossoming between [them]?” Was Liz not okay with being referred to as “at least a 2 on the Kinsey scale”? NO. For Chrissake, fanfiction was created around imagining television characters as homosexuals, and so far Spock hasn’t sued anyone.

Which leads us to this singular conclusion: that guy is probably gay, right? 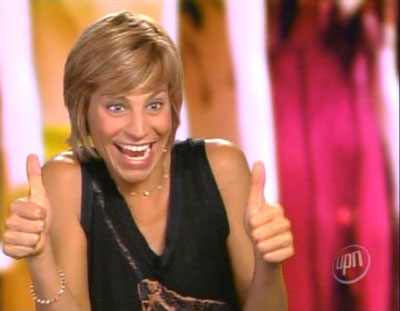