Picture this — the year is 2003. It’s Sunday morning, around 11 AM. You’re making French toast. You’re in your house in San Francisco, on a quiet street near Golden Gate Park. You’re wearing your favorite cozy bathrobe.

There’s a knock on your front door. How weird! You weren’t expecting anyone. You go to answer, because why not.

At your door is a 10-year-old girl, accompanied by a little boy, whom she explains is her younger brother. 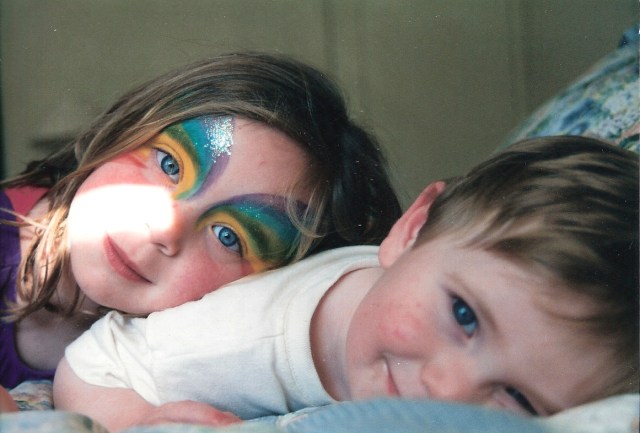 Me (left) and my brother Toby (right).

She also explains to you that she lives down the street, and she knocked on the door because she is wondering if you would like to buy her book of poems, titled “Reading With The Stars, by Anya” (unfortunately phonetically similar to yet completely disconnected from the hit TV show, Dancing with the Stars). She offers that she is charging an extremely reasonable $10/book, which comes out to about one dollar per poem.

How can you say no to this small child and her even smaller younger brother? You buy the book. Obviously.

At this point, you’ve probably figured out that I’m the girl in that bizarre anecdote. This is a true story, except for that in reality, the neighbor actually didn’t buy the book. But they did invite me and my brother in to eat French toast, which I remember thinking was actually probably worth more than ten dollars, what with the labor required and what not — so overall, actually a better deal for us.

I bring up this story by way of introduction because I think it says a lot about who I am and how I am.

But before I go into all that, let me introduce myself! Hi, I’m Anya, and I am very, very, very excited to share that I’m Autostraddle’s first-ever Director of Brand Partnerships. I have loved, read, and been obsessed with Autostraddle for the last ten years and I honestly can’t believe I get to work for an organization I believe in so much. What exactly is a Director of Brand Partnerships? More on this to come, but in short: there are brands out there that want desperately to reach you — yes, you! — and I’m going to help them do that, in exchange for $$$. Which all goes back to keeping Autostraddle going.

So back to the 10-year-old girl with the book of poems. First of all, what’s gayer than peddling your own book of poetry to unsuspecting neighbors? ????

In reality, it took me about ten more years to realize and embrace my queerness. It’s a classic story — I had no idea I was queer, even though looking back it’s so… what’s the word… obvious. (The obsession with the local college women’s soccer team; the refusal to wear pink; the fervent support of my high school’s Gay Straight Alliance combined with the inexplicable refusal to join it; etcetera.) 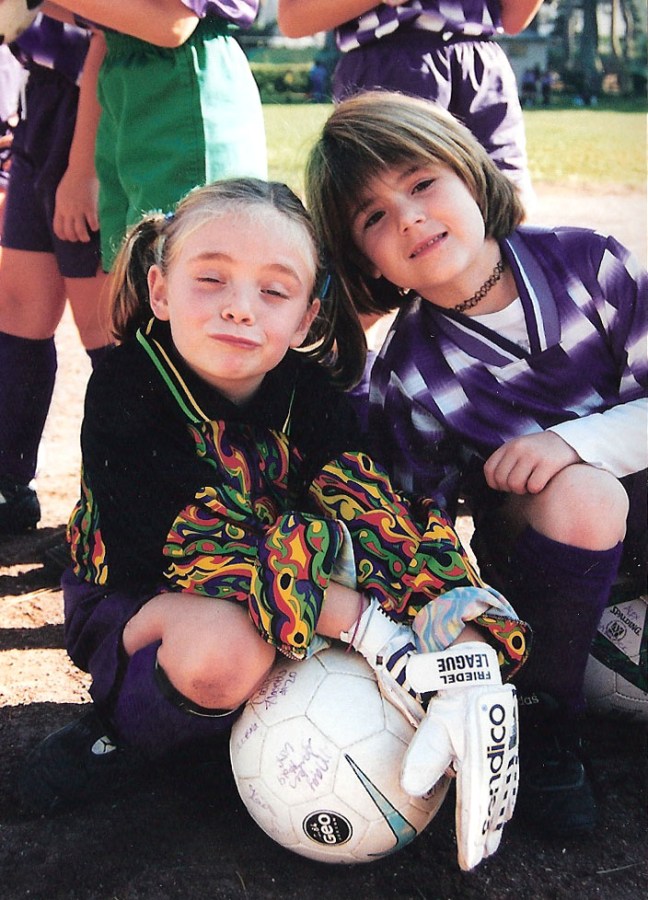 I mean. (I’m the one on the left, the world’s tiniest goalie.)

It all came to a head in college. As I swam neck-deep in the bewildering confusion that is newfound queerness, an older, wiser queer asked me a seemingly harmless question: “How are you?” Naturally, this caused me to completely fall apart, which caused them to tell me about Autostraddle.

I really, honestly, deeply, don’t know how I would’ve gotten through that time without Autostraddle.

I found a file called “Reading With The Stars.pub” on a back-up of a back-up of a back-up, and I can’t open it, because what even is “.pub”. However, for reasons unknown to my current self, I apparently saved the Table of Contents for my poetry book separately — as a word doc, which I can open. So here’s the table of contents from the book I tried to sell: 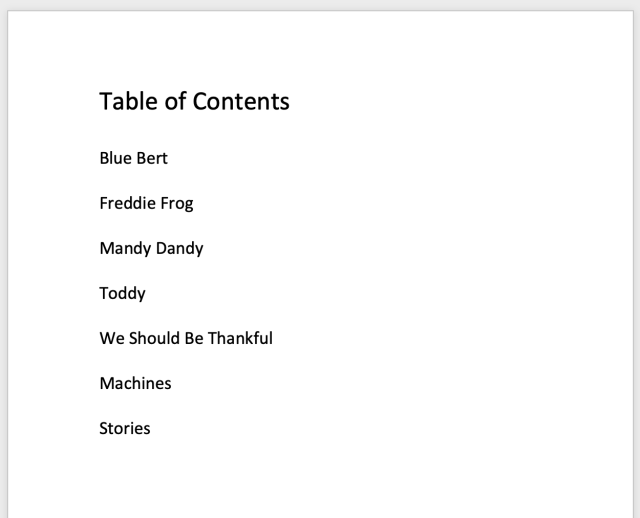 I mean, the depth! The range! The sheer volume! Who the hell is Toddy and how can I reach him!! The collection seems extremely character-driven, while of course touching on some pertinent themes including the idea that We Should Be Thankful, Machines, and, in a shockingly meta twist, Stories.

All jokes aside, I’ve loved telling stories for as long as I can remember. What started off as dictating fairy tales to my compassionate and obliging mom evolved into avid journaling, which evolved into playwriting. I write plays to process the things I can’t stop thinking about — my obsessions, my questions, my fears and desires.

I wrote the first play I was proud of in college, right around when I first learned about Autostraddle. I had just read some key selections from the diary of Frances Willard (historical queers!!!) where she writes about her… friend… Mary Bannister. So then I wrote a play about two girls trying to figure out their feelings after being cast in their high school play as Frances Willard and Mary Bannister (it involves sleepovers, cookie dough, and Ouija boards).

I haven’t really been able to stop writing plays since then, for better or for worse. My most recent play is about an old man who lives in his house surrounded by piles and piles of pancakes, which are also his memories. It’s a meditation on the need to share memories, when sharing memories is the same as eating pancakes.

I think that I write to illuminate and celebrate existential dread rather than ignore it. To embrace the happysad, the unmakingsense, and the inscrutability of the everyday. I write to hold people close, knowing it’ll never be close enough. The holding is the important thing, anyway.

Maybe that’s what Toddy was about.

It’s worth noting that there’s a reason my brother was with me when I went door-to-door attempting to sell my “book” (10 pages stapled together). It’s because I asked him to. He’s four and a half years younger than me, and I remember thinking: he’s younger, so he’s cuter, so people will be more likely to buy from us if he’s asking.

What a weird thing for a 10-year-old to think! And… what a shrewd business move?!?

For as long as I can remember, I have liked selling things. Not just anything, though — things that have real, undeniable value, that I believe would do genuine good. Like my book of poetry, or so I thought at the time. It’s extremely silly looking back, but back then, I really thought that my book contained powerful stuff, and that the world would be bettered by experiencing it. And so I thought, it should be making money.

This has taken many forms over the course of my life: selling soap at the family camp where children were constantly covered in dirt; selling hand-knitted hats (yes I love knitting) at my middle school’s book fair (what pairs better with reading than a cozy hat); organizing a student talent showcase at my high school when there was none.

All of these endeavors involved raising money for other things, too: the soap profits were divided between me, my friend, and a charity; the hats raised money for survivors of the 2004 tsunami in Indonesia; and the student talent showcase was a fundraiser for an educational non-profit called Aim High. (I feel like I have to mention that I made a club dedicated solely to knitting the hats, cementing my status as an Extremely Cool Sixth Grader. The club was called H.A.T.S. and stood for Help Aid Tsunami Survivors and if that’s not stellar branding… I don’t know what is.)

I don’t think I have to convince any of you that Autostraddle has inherent good. For the last decade or so of my life, Autostraddle has been warm abundance — of advice, of joy, of community. And I would wager that it’s been that for many of us, and will be for so many more to come.

That inherent good deserves and requires ongoing, stable financial support, and we’re going to get it. We’ve made it this far largely thanks to your incredible generosity in our fundraisers and memberships (thank you, thank you, thank you!!!).

And now it’s time to go even further.

In a strange and unpredictable way, this position feels like it combines all the disparate parts of me: Gay! Storytelling! Business! All for a cause I care deeply about! So to say that I’m excited about this job is really the understatement of the century. I’m quaking in my boots! I’m jumping for joy! My heart is fluttering! I’m all those things at once!

Between the poetry book and the soap and the weird plays and now, I’ve worked at media agencies large and small, creating content and crafting media strategies for multi-million dollar corporations. But they don’t have what Autostraddle has, because they don’t have… you!

Brands want — nay, need! — to talk to you, and they’re willing to pay. So… we’re going to let them! All while, of course, centering our absolutely incredible editorial team’s content and staying true to our values, so that we never lose the integrity, honesty, and uniqueness that makes Autostraddle so special.

Let’s do this! Maybe you have an idea about a brand that might like to work with Autostraddle (or maybe you even work for one of those brands, or their agency!). Maybe you’re just feeling excited like I am. Maybe you don’t even have anything to say but you just feel like reaching out! If any of these things are true, seriously, send me an email!

10-year-old me never could’ve imagined how this all turned out, and how right it would all feel. So let’s keep building things we can’t yet imagine — let’s create a financial future for Autostraddle stronger, steadier, and healthier than we ever could’ve imagined. Onwards and upwards, friends!!!