Hello and welcome to this Legends of Tomorrow recap of season 7 episode 10, “The Fixed Point” aka the (second) one directed by Maisie Richardson-Sellers AKA THE ONE WHERE WE GET OUR FIRST CANON ASEXUAL LEGEND OF TOMORROW!

Eh hem. But we’ll get there. Previously on Legends of Tomorrow, the Legends were attacked by Evil Gideon and her band of androids so they scooped up the inventor of time travel and are on a mission to stop them.

At the end of the last episode, Gideon said they have to stop the assassination of Archduke Franz Ferdinand and as she walks through a potential plan, Ava realizes she’s serious and asks why the heck she would recommend messing with time so majorly. But the thing is, since it’s a Fixed Point in history, aka a moment so pivotal people aren’t supposed to time travel there, Gideon knows that messing with it will be too big of a deal for Evil Gideon to just let go. It’s bait! 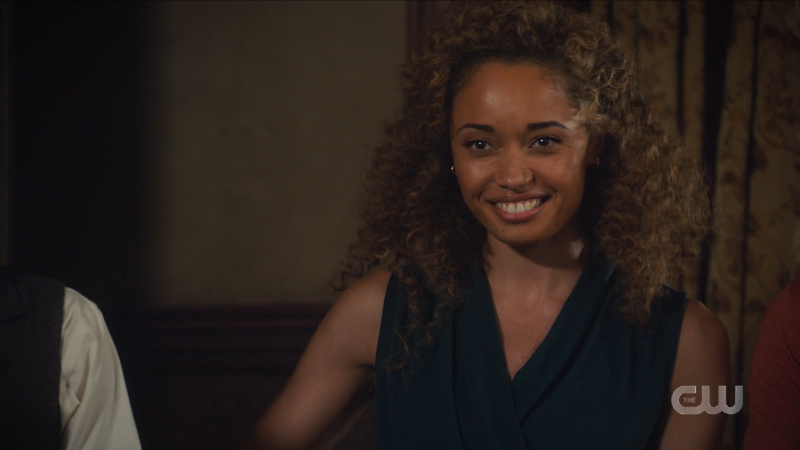 I already hate how hard it is to get a shot of Astra without Behrad in it. (And to reiterate, I like Behrad, I just don’t like this pairing and its potential to water Astra down.)

Sara feels like she can finally see the light of the end of the tunnel, a way out of the darkness that descended when the Anti-Legends blew up their Waverider. She takes a deep breath and holds her head high and faces her team and rallies the troops. They’re finally going home. 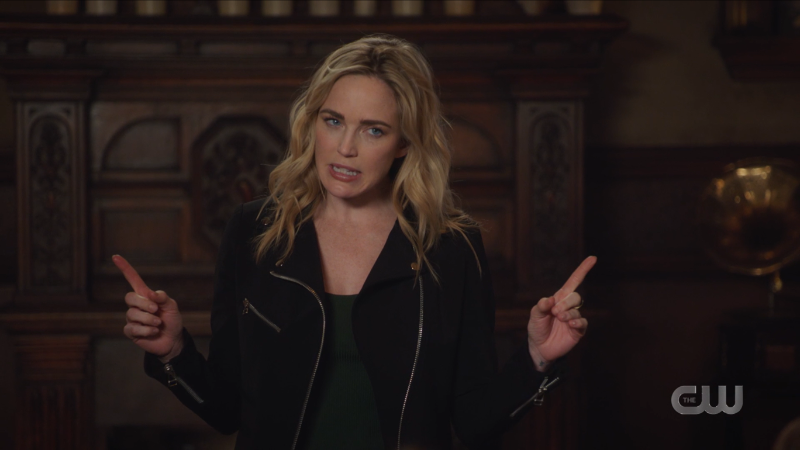 Who’s going to tell them that actually 2022 is no picnic and maybe they should skip ahead a bit?

Nate tells the team how the historical day went down and they make a plan to drug the three would-be assassins so they sleep through their murder plot. Once they feel ready, they head to 1914, but before Sara can slip the drugs into the bad guys’ drinks, a mysterious man stops them. He clocks Sara and Nate as time travelers and invites the shocked duo into a supernatural speakeasy called the Fixed Point, a bar packed with other time travelers here to do exactly what the Legends are planning. 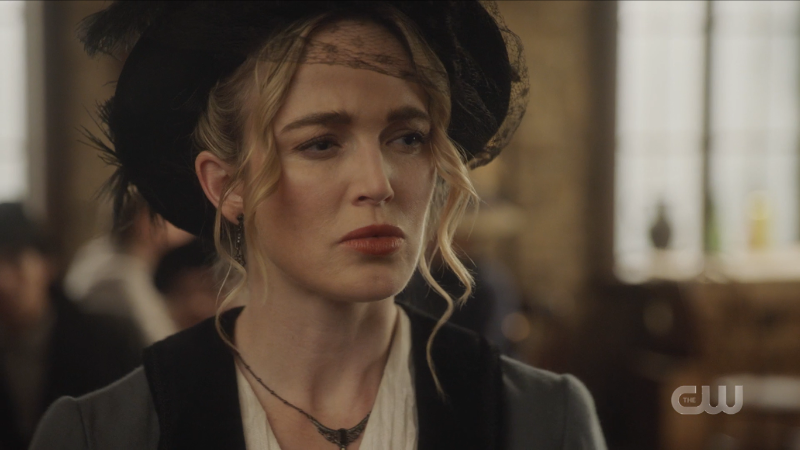 This look gave me Dracula (2013) flashbacks and I’m not mad about it.

Sara fetches the rest of her team, sans her wife and the father of time travel, and Gideon is surprised she didn’t know about this hangout. It doesn’t take too long before they see how things work here: a time traveler pulls a ticket, and when their number is called, they get to try their hand at stopping the assassination.

The problem is, travelers always fail, and failing often ends in death. The barkeep says that trying to change a Fixed Point pisses Time off, and Time will try to kill you about it. 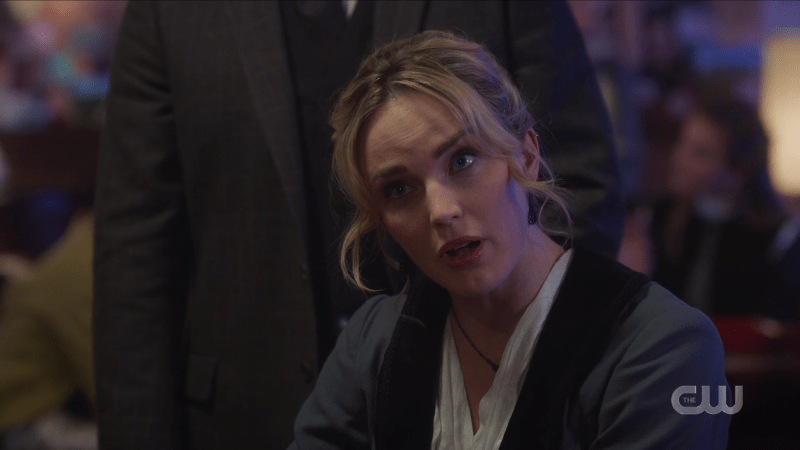 “What in the Final Destination is going on here?”

Back at the manor, Ava tries to make a plan with Gwyn that will save Alan with as few ripples as possible. When Gary returns to give Ava the update on what’s happening topside, after marveling over a whole community of time travelers that Gwyn Davies helped create, Ava realizes that if Alan never dies, Davies will never invent time travel, and reality as they know it will devolve. No time travel, no Legends, no Avalance. 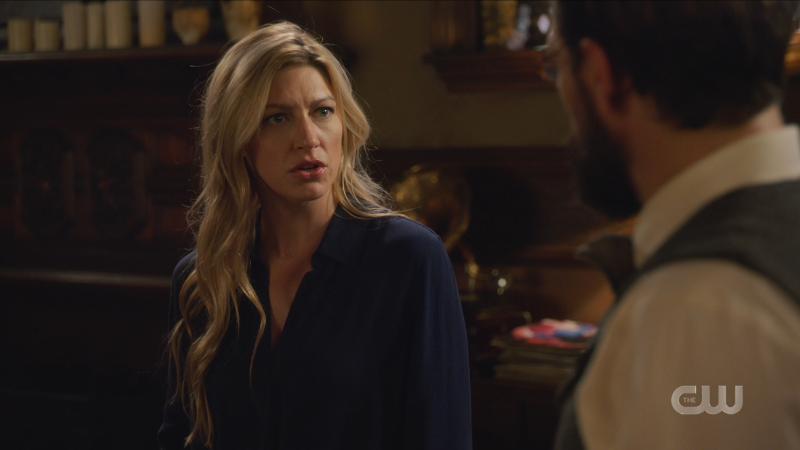 This is neither here nor there but Jes Macallan’s acting skills and hair game have been on an upward trend and they were already doing great.

Gwyn has already thought of this though, and he has a solution. He wants to save Alan, but never tell his younger self. This very idea breaks Ava’s whole heart and she cannot fathom why he would want that.

In the bar, Gideon’s having a hard time wrapping her human brain around the totems shmotems of time travel, so she drags Gary to the bar with her to deal with her problems the way many humans do. Behrad and Astra, despite deciding last week that they were going to take it slow, are being gross, so Spooner is left with Fancy Zari to try out this whole one-on-one hangout deal. 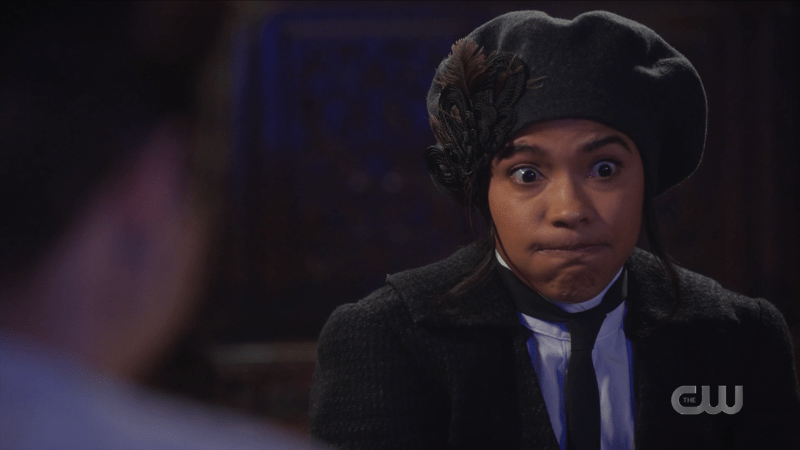 Me trying to make small-talk with a coworker I barely know while waiting for the rest of the people to show up on the Teams call.

It’s pretty cute, actually, even though it’s incredibly awkward. They both try to chat about the other’s interests, despite having little to no interest in it themselves, and it’s very sweet!

Across the bar, some youths start making fun of Sara and Nate, calling the Legends washed up superheroes. And Sara gets a little in her head about it, and the next plan she comes up with is so sure to fail that a man who happens to also be trying it does indeed get dead.

She decides to just improvise instead; she’s always been good at following her instincts. So she steels herself and marches out into 1914. 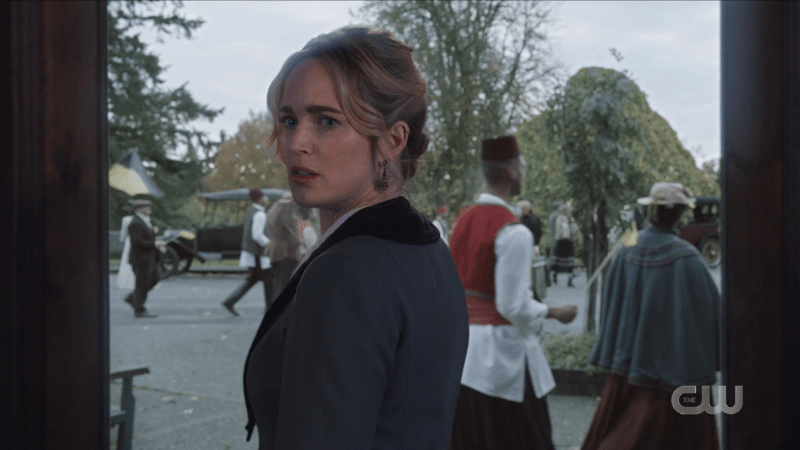 And almost immediately gets clotheslined by a ladder.

Sara goes back to the bar with her tail between her legs, embarrassed to hear Gen Z³’s laughter. She tries to go back to the drawing board, but she is clearly a bit shook.

Also shook is Ava, who can’t fathom why it seems like Gwyn has given up even trying to come up with a way to save Alan and the history of time travel. Gwyn admits that he thinks that’s what he deserves, that this is his penance for loving another man. Ava doesn’t understand how someone who has lived with her and her wife for at least a week at this point could say such a thing, and she promises that there are places — places they can take him — where he would be accepted and safe to be himself, because there’s nothing wrong with loving another man. 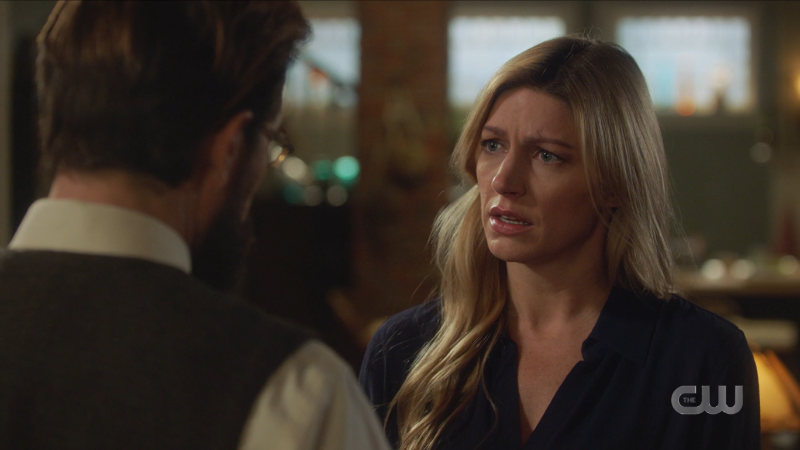 My kingdom for an Ava Sharpe pep talk.

But Gwyn doesn’t want community or acceptance; he believes he’s already sinned in the eyes of God and deserves to be punished. Religious trauma will do that to a person.

At the Fixed Point, Fancy Zari and Spooner take a break from their awkward small talk to rag on some bar patrons and they realize this is something they have in common: hating people. The tension broken, Zari admits that she thought Spooner didn’t like her, and Spooner admits that she thought Zari thought she was too good for her. They were intimidated by each other and keeping themselves from a fox and the hound friendship this whole time. 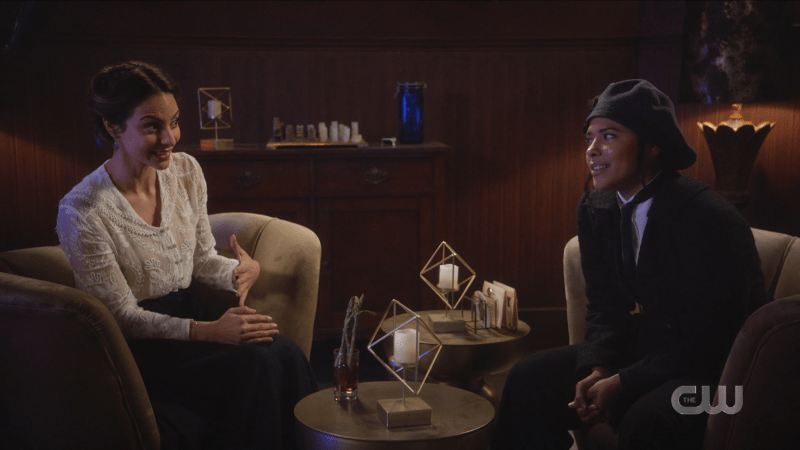 This was some bar bathroom level bonding and I am here for it.

Sara is kicking herself for leading the team straight into a brick wall, but Nate tells her to shake it off. She got the yips! It happens. But Sara feels off in a bigger way; probably ever since her honeymoon ended in an alien invasion. And what’s extra weird, is she has no idea what their next move should be, and it’s a new and unwelcome feeling.

Nate calls the Legends together to give their captain a taste of her own pep talk medicine. Maybe Sara failed because she tried to do it on her own. This time, they’ll try as a team. Because one thing they have over the Gen Z³ kids is that they’ve failed. A lot. Together. 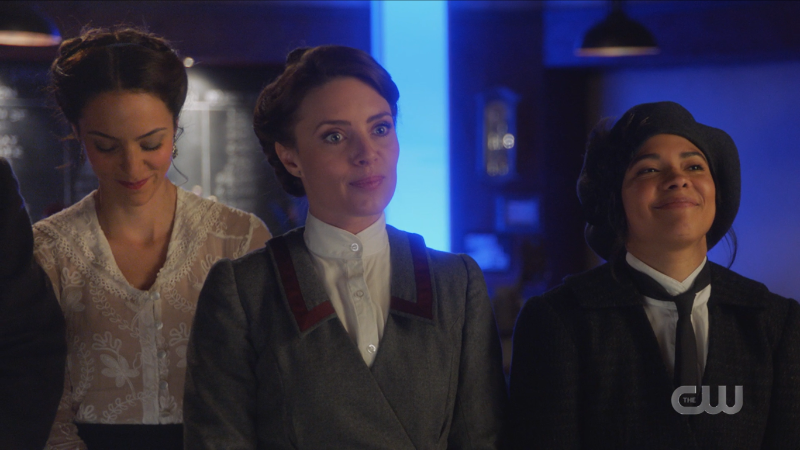 Failures of Today is a superhero group I’d qualify for.

Reinvigorated, Sara gets ready to break time again with her found family. Since she’s part of the Unkillable Gay Squad, she will take point, and everyone else will help from the sidelines. Zari and Spooner head off together, not ready to be done forming this new friendship.

Valerie has written 382 articles for us.